The global medical gauze and tapes market size was valued at USD 6.3 billion in 2019 and is expected to grow at a compound annual growth rate (CAGR) of 4.2% from 2020 to 2027. A worldwide increase in the incidence of chronic diseases such as cancer, diabetes, and other diseases is driving the market for medical gauze and tapes. Factors such as unhealthy and sedentary lifestyles, antimicrobial resistance, alcohol consumption, and smoking are contributing to the growing prevalence of non-communicable diseases.

As per the National Diabetes Statistics Report 2017, by CDC, more than 100.0 million people in the U.S. were living with diabetes or prediabetes. In addition, WHO reported that in 2016, approximately 1.6 million deaths globally were directly caused due to diabetes. Cancer has been a global healthcare burden, as it is one of the leading causes of death. According to WHO, cancer is the leading cause of death globally and almost 1 in 6 deaths can be attributed to the disease. In addition, it reported that over 70.0% of cancer-related deaths mostly occur in middle-and low-income countries. 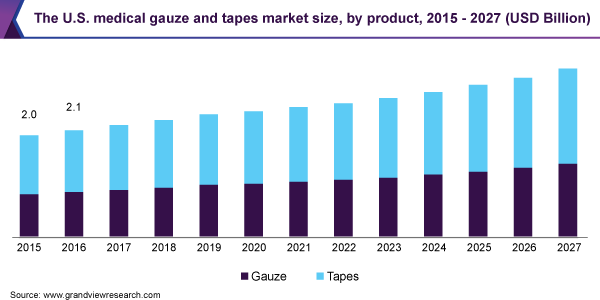 According to the U.S. CDC, 6 in 10 adults are suffering from a chronic disease and 4 in 10 adults are suffering from two or more chronic diseases in the U.S. Furthermore, chronic diseases are the leading cause of disability and death and a key contributor to the country’s USD 3.5 trillion annual healthcare costs. As a result of the rising prevalence of chronic conditions, the number of surgeries being performed has increased. Wound dressing products such as medical gauze and tape are increasingly being used to prevent surgical site infections. Most surgical wounds after cancer surgery are generally large and deep, producing exudate that requires regular management. Wound dressing products such as medical tapes, gauzes, and biomaterials help to manage large wounds, thus, reducing the risk of infection. Therefore, the rising incidence of chronic diseases is expected to boost the demand for medical gauze and tape, thereby propelling the market growth.

Increasing incidence of burns, trauma events, and road accidents across the globe is anticipated to drive the market for medical gauze and tapes. For instance, according to WHO (2018), approximately 1,000,000 people in India suffer from severe or moderate burns every year. In addition, as per the NCBI, in 2017, countries such as Finland, the Netherlands, Bulgaria, China, Australia, and the U.K. reported a rise in the incidence of burn wounds. Furthermore, according to the American Association for the Surgery of Trauma, in 2017, around 1.2 million people died globally, and road accidents account for around 3,242 deaths per day. Road accidents mostly occur in middle- or low-income countries. Biomaterials and skin substitutes are majorly used for healing all kinds of burn wounds. Moreover, bandages and gauzes are used for the treatment of minor wounds. Thus, a rising number of accidents is expected to boost the demand for products such as medical gauze and tapes, which is expected to lead to considerable market growth over the forecast period.

Furthermore, as more people are participating in sports and recreational activities, the risk of injuries is increasing. For instance, according to Stanford Children’s Health, over 3.5 million injuries are reported annually among children and teens in the U.S., and around 21.0% of all injuries are traumatic brain injuries. Furthermore, according to the Canadian Institute for Health Information, from 2016 to 2017, around 17,655 people were hospitalized due to sports-related injuries. Similarly, according to the American Physical Therapy Association (APTA) 2017 report, approximately 8.6 million sports injuries are reported in the U.S. each year. Thus, an increase in the incidence of injuries is anticipated to drive the demand for medical gauze and tape, thereby aiding in market growth.

The acute wounds segment held the largest revenue share of around 60.1% in 2019 in the market for medical gauze and tapes. This is owing to the rising cases of burns and trauma and the increasing number of surgeries across the globe. An acute wound is an injury to the skin that occurs unexpectedly and includes incisions, abrasions, burns, scratches, and puncture wounds. It heals at a normal rate according to the regular wound healing process. These types of wounds can take place anywhere on the body and differ from small scratches to deep wounds. The acute wounds segment is further classified into surgical or traumatic wounds and burn wounds. Treating acute wounds will depend on the severity and location of the wound. However, the primary treatment includes dressing the wound in medical gauze and tapes. Thus, the increasing number of patients suffering from acute wounds is expected to drive the market for medical gauze and tapes.

The chronic wounds segment is anticipated to witness the fastest growth over the forecast period owing to the increasing cases of chronic diseases, especially diabetes, across the globe. Chronic or non-healing wounds occur when there is no significant healing of an injury for about 4 weeks. These types of wounds progress and will heal slower than expected or will not heal at all.

The symptoms of chronic wounds include increased infection and pain in the area of the wound. This can be due to pressure on or around the wound, exposure to bacteria or trauma, or insufficient blood and oxygen supply. It is estimated that 1%-2% of the population will suffer from a chronic wound once in their lifetime. In the U.S., it is stated that chronic wounds affect around 6.5 million people. Moreover, the incidence of chronic wounds is expected to increase with age and will impose a significant financial burden on society.

It is estimated that more than USD 25.0 billion is spent by the healthcare system on treating wound-related complications every year in the U.S. In addition, as per the American Diabetes Association (ADA), more than 9-12 million people in America suffer from chronic ulcers. Thus, increasing cases of chronic diseases, especially diabetes, and the rising geriatric population across the globe are the major drivers of the segment. These common wounds have different characteristics. There are many common types of chronic wounds. The chronic wound segment is further fragmented into diabetic foot ulcers, pressure ulcers, venous leg ulcers, and others.

The tapes segment held the largest revenue share of around 56.0% in 2019 in the market for medical gauze and tapes. The segment is anticipated to witness significant growth over the forecast period. This is owing to the rising prevalence of chronic wounds and an increasing number of surgeries across the globe. Medical tapes are majorly used for dressing both acute and chronic wounds. An increase in the use of medical tapes and a rise in awareness about the use of medical adhesive products in sports injuries are some of the factors driving segment growth over the forecast period. In addition, these products, including silicone-based tapes, facilitate constant adhesion and are gentle to the skin, which is also expected to propel segment growth. The medical tapes segment is further segmented into fabric tape, paper tape, plastic tape, and other tapes. The other tapes include silicone, acrylic, and rubber tapes. 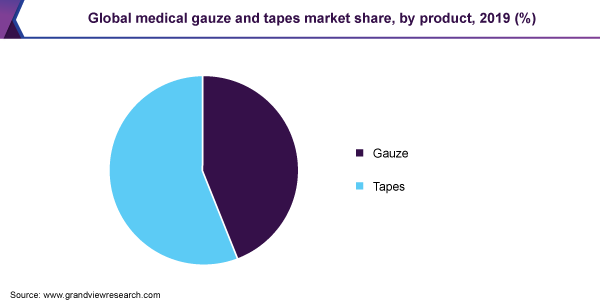 The gauze segment is anticipated to witness the fastest growth rate over the forecast period. Medical gauze is a bleached white cloth or fabric that is used in dressings, bandages, and surgical sponges. It is mostly used in wound care dressing. The medical gauze can be used for packing, cleansing, covering, scrubbing, and securing different types of wounds. Thus, an increasing number of accidents and surgeries is expected to drive the market for medical gauze and tapes. For instance, according to The Brazilian National Transport Confederation (CNT), in 2018, fatal crashes on Federal roads increased by 1.2% from 2017. The medical gauze has been segmented into woven gauze and non-woven gauze.

North America dominated the market for medical gauze and tapes in 2019 and accounted for a revenue share of 45.4%. The region is expected to witness a considerable growth rate of 4.3% over the forecast period. Increasing incidence of sports injuries, rising number of road accidents, and the presence of several key players in the region are some of the factors expected to drive the market for medical gauze and tapes in the region. In addition, the presence of a highly developed healthcare infrastructure and favorable reimbursement policies are expected to propel market growth over the forecast period.

In the Asia Pacific, the market for medical gauze and tapes is anticipated to witness the fastest growth during the forecast period. The presence of developing countries such as Japan, India, and China is anticipated to fuel market growth in this region. In addition, the growing medical tourism industry in these countries is also contributing to the increasing demand for wound dressing products in this region. For instance, according to a report on Export Health Services by the Directorate-General of Commercial Intelligence and Statistics of India, in 2015-2016, India had 58,300 tourists on medical visas.

In Latin America, the market for medical gauze and tapes is anticipated to grow at a significant rate during the forecast period. The presence of developing economies, such as Brazil and Mexico, is expected to primarily drive the market in the region. The availability of advanced treatment options at low cost in Latin America is making the region a preferred destination for medical tourism. In addition, governments of Latin American countries are consistently involved in improving healthcare infrastructure. Thus, such factors are expected to fuel the growth of the medical gauze and tape market over the forecast period.

Companies are engaging in partnerships, mergers, and acquisitions, aiming to strengthen their product portfolio, and manufacturing capacities, and provide competitive differentiation. For instance, in April 2019, Smith and Nephew PLC announced the acquisition of Osiris Therapeutics, Inc., which specializes in regenerative medicine products. With this acquisition, the company will accelerate the development of its advanced wound management product portfolio, thereby expanding its customer pool and market reach. This initiative is anticipated to boost the growth of the company. Some of the prominent players in the medical gauze and tapes market include:

This report forecasts revenue growth at global, regional, and country levels and provides an analysis of the latest industry trends in each of the sub-segments from 2015 to 2027. For the purpose of this study, Grand View Research has segmented the global medical gauze and tapes market report on the basis of product, application, and region:

How big is the medical gauze and tapes market?

What is the medical gauze and tapes market growth?

Which segment accounted for the largest medical gauze and tapes market share?

b. North America dominated the medical gauze and tapes market with a share of 45.40% in 2019. This is attributable to the increasing incidence of sports injuries, the rising number of road accidents, and the presence of several key players in the region.

Who are the key players in the medical gauze and tapes market?

What are the factors driving the medical gauze and tapes market?

b. Key factors that are driving the market growth include rising incidence of Hospital Acquired Infections (HAIs), rising prevalence of chronic diseases, and the increasing number of accident cases.