The global metal 3D printing market size was valued at USD 3.52 billion in 2021 and is expected to expand at a compound annual growth rate (CAGR) of 23.9% from 2022 to 2030. Metal 3D printing is one such market that has benefitted significantly from the growing necessity of rapid prototyping and advanced manufacturing practices. The industry is poised to witness unprecedented growth over the forecast period owing to the rising application of additive manufacturing in various industry verticals. The global industrial printer market is increasingly advancing towards consolidation to stay ahead of the competition. A substantial growth factor for this market is increasing innovation, which is leading to several benefits through the adoption of metal 3D printing across heavy industry applications. 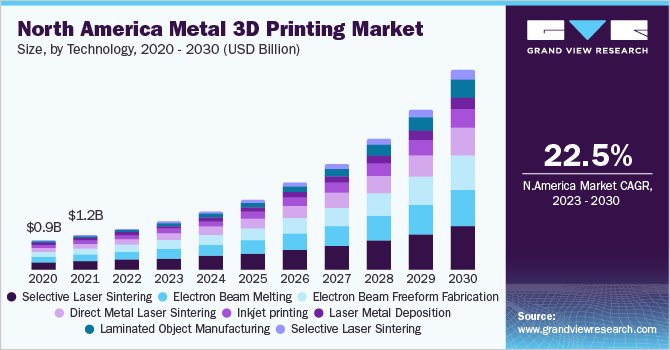 Increasing adoption of metal 3D printers for the designing and prototyping of products and objects, coupled with the reduced manufacturing expenditure and accuracy in the end product, is a key market proliferating factor. The market is poised to witness high demand arising prominently from the healthcare, automotive, aerospace and defense sectors. Growing advancements in the healthcare sector to curb physical disabilities and ensure healthy living are influencing the sector to flourish and adopt new innovative methodologies, such as 3D printing. Additionally, the automotive and aerospace sectors, where prototyping and designing play a vital role in research & development to achieve perfection in their production are leading towards greater opportunities and increasing the adoption of the 3D printing process.

However, the prevailing misconceptions with respect to the prototyping processes held by the small and medium-scale manufacturers are hindering the adoption of additive manufacturing. Companies involved in designing, particularly small-scale and medium-scale enterprises, are deliberating before considering investments in prototyping as accountable investments rather than trying to understand the advantages and benefits of prototyping. The general notion prevailing among these enterprises is that prototyping is merely an expensive phase prior to manufacturing. Such perceptions regarding the prototyping, coupled with the lack of technical knowledge and a looming lack of standard process controls, are expected to hinder the market growth.

The outbreak of the COVID-19 pandemic has significantly impacted the overall global economy and subsequently, the 3D printing industry. Initially, Europe and Asia Pacific were among the worst affected regions in terms of the number of COVID-19 patients across the globe. Further, the situation worsened in the U.S. as well. Due to the rapid spread of the virus, the governments issued an order for the complete lockdown of some key cities. The complete lockdown affected the production of 3D printing manufacturers. This is attributed to the labor shortage and the complete disruption of logistics and supply chain in the nation. The halt in the production of 3D printing had an adverse impact on the overall market growth in the first and second quarters of 2020.

Selective Laser Melting (SLM) technology led the market and accounted for more than 20.0% share of the global revenue in 2021. Although the advantages and ease of operations associated with the SLM technology are encouraging the adoption of this technology, advances in technology and aggressive research and development activities undertaken by the industry experts and researchers are opening opportunities for several other efficient and reliable technologies. Other technologies used for metal 3D printing include Selective Laser Sintering (SLS), Direct Metal Laser Sintering (DMLS), Inkjet printing, Electron Beam Melting (EBM), Laser Metal Deposition (LMD), Laminated Object Manufacturing (LOM), and Electron-beam Freeform Fabrication (EBF3).

EBM accounted for a considerable revenue share in 2021 owing to the extensive adoption of the technology across various metal 3DP processes. The DMLS, EBF3, and SLS are expected to witness high adoption over the forecast period as these technologies are applicable in specialized additive manufacturing processes. Growing demand from aerospace and defense, healthcare, and automotive verticals would open opportunities for the adoption of these technologies.

The scanning software segment is expected to expand at the highest CAGR of 17.4% from 2022 to 2030 and generate considerable revenue over the forecast period in line with the growing adoption of scanners. The demand for scanning software is estimated to grow on account of the growing trend of scanning objects and storing scanned documents. This ability to store the scanned images of the objects irrespective of their size or dimensions for the 3-dimensional printing of these objects whenever necessary is expected to fuel the growth of the scanner software segment over the forecast period.

Functional parts include smaller joints and other metallic hardware connecting components. The accuracy and precise sizing of these functional parts are of paramount importance while developing machinery and systems. The functional parts segment is expected to expand at a significant CAGR of 24.0% from 2022 to 2030 in line with the increasing demand for designing and building functional parts.

The services segment is expected to expand at a significant CAGR of 23.5% from 2022 to 2030. With the adoption of methodology, metal 3D printing services help manufacturers to produce complicated and delicate functional parts with greater ease and accuracy. Moreover, the production expenditures are being reduced significantly owing to the enhanced prototyping and benefits offered by the technology. As such, the benefits and advantages of 3D printing are gaining greater attention from the players of various industry verticals.

The automotive segment led the market and accounted for more than 20.0% share of the global revenue in 2021. Other verticals include aerospace and defense, healthcare, consumer electronics, industrial, power, and energy, among others. The aerospace and defense, healthcare, and automotive verticals are anticipated to contribute significantly to the growth of metal 3D printing over the forecast period owing to the active adoption of technology in various production processes associated with these verticals. 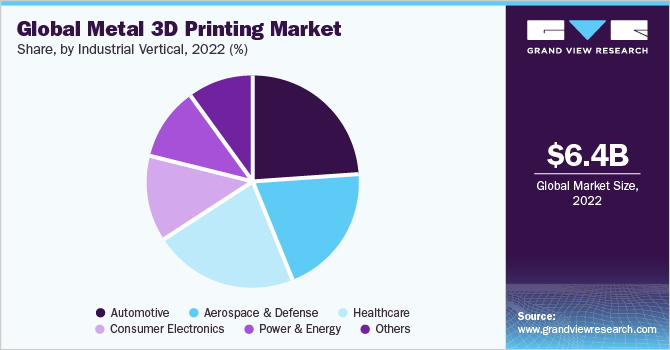 The healthcare segment is expected to expand at a significant CAGR of 24.3% from 2022 to 2030. In the healthcare sector, additive manufacturing helps in the development of artificial tissues and muscles, which replicate the natural human tissues and can be used in replacement surgeries. These capabilities are expected to help in driving the adoption of metal 3D printing across the healthcare vertical and contribute significantly towards the growth of the industrial segment.

Asia Pacific is projected to expand at the highest CAGR over the forecast period. This rapid adoption of metal 3D printing in Asia Pacific can be attributed to the developments and upgrades across the manufacturing industry within the region. The Asia Pacific region is also emerging as a manufacturing hub for the automotive and healthcare industries. A stronghold on the production of consumer electronics, coupled with rapid urbanization, is also contributing to the rising demand for three-dimensional printing in the region.

Market players in the market are improvising the technology continuously in response to the growing demand for metal 3D printing applications from the automotive, healthcare, and aerospace and defense verticals for manufacturing purposes. Several key market players are increasingly undergoing mergers and acquisitions along with the new industry entrants so as to expand their geographic presence and capture the escalating market potential. For instance, in August 2017, GE Additive (U.S.), an additive manufacturing company, acquired Arcam AB (Sweden) to expand the service and solution offerings to the customers. Some prominent players in the global metal 3D printing market include:

The report forecasts revenue growth at the global, regional, and country levels and provides an analysis of the latest industry trends and opportunities in each of the sub-segments from 2017 to 2030. Additionally, the report covers shipment estimates and forecasts as well as ASP qualitative analysis from 2017 to 2030. For the purpose of this study, Grand View Research has segmented the global metal 3D printing market report based on component, technology, software, application, vertical, and region:

How big is the metal 3D printing market?

What is the metal 3D printing market growth?

b. North America dominated the metal 3D printing market with a share of 34.8% in 2021. This is attributable to the extensive adoption of metal 3DP in the region. Countries, such as the U.S. and Canada, have been prominent and early adopters of these technologies.

Who are the key players in the metal 3D printing market?

What are the factors driving the metal 3D printing market?

b. Key factors that are driving the metal 3D printing market growth include increasing adoption of metal 3D printers for designing and prototyping of products & objects coupled with the reduced manufacturing expenditure and accuracy in the end-product.