The global military simulation and virtual training market size was valued at USD 10.80 billion in 2017 and is expected to grow at a compound annual growth rate (CAGR) of 4.2% from 2018 to 2025. The rising need for trained workforce in the Naval coupled with rising demand for conventional and unconventional military equipment and software is anticipated to drive the market. Military simulation and virtual training help reduce the wear and tear of equipment, enables cost savings, and provides the ability to meet varied requirements, which is resulting in the overall market growth. 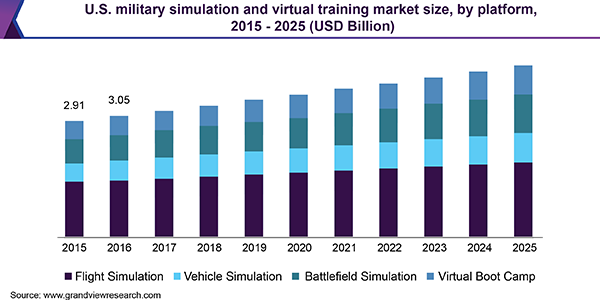 Governments across the world are reducing military costs due to reduced financial resources. The defense ministries of many countries are reducing their training budgets and are downscaling the militaries. This has increased the focus of the military in attaining cheaper and effective solutions for their requirement. These factors are expected to further drive the market over the forecast period.

Real-time training is time-consuming, expensive, and it also requires a large amount of raw materials such as fuel and explosives with a high degree of risk involved. Therefore, defense ministries are increasingly opting for virtual training and simulation-based games which also include technologies such as big data, Artificial Intelligence (AI), and cloud computing.

Military simulation can be used for training of soon-to-be soldiers and to depict a real-time scenario with realistic computerized scenarios. The increasing investments in simulation software are anticipated to be one of the important factors driving the market growth. Also, defense ministries of different countries are reorganizing and modifying their militaries with innovative solutions, which, in turn, is driving the market.

Military simulation and virtual training are progressively getting adopted by the armed forces of many countries across the globe. They help reduce training costs as they are based on Commercial-off-the-Shelf (COTS) components. The simulators are created on a low development cost. These factors are significant for the armed forces to invent massive innovation in simulation-based training technologies.

The increasing need for modification of existing equipment and order for new advanced equipment is anticipated to drive the growth of the military simulation and virtual training market. For instance, Bohemia Interactive Simulation developed an Augmented Reality (AR) visual systems for Textron, Inc. These systems support a trainee’s interactions with the real world using VR/AR technologies and offers a synthetically generated visual scene.

The development of portable simulation systems such as vehicle, flight, and battlefield simulation is expected to offer tailoring solutions as per specific needs and individual missions. These systems are capable of improving the techniques for applications related to air, ground, and naval platforms offering strategic experience to soldiers. Simulation training solution helps to improve capabilities and the overall understanding of soldiers. These systems allow the armed forces to boost the overall capabilities related to knowledge of handling advanced missile systems and complex electronic military equipment, which is anticipated to spur the market growth.

Disputes over borders and natural resources have warranted the military to focus on modernizing their army troops. This is expected to drive the demand for ground-based military simulation and virtual training, making it the second-largest segment. Tanks are a key component of ground warfare, but their use in training results in high operating costs. Furthermore, the adoption of ground-based simulators is increasing owing to reduced training costs, and improved accuracy in measuring the training objectives.

On the basis of platform, the can be categorized into battlefield, vehicle, flight simulation, and virtual boot camp. The flight segment emerged dominant in 2017 owing to increasing penetration in commercial and military flight training practices. The high cost of flying an actual aircraft, high risk concerning the loss of human lives, and continuously increasing production cost of aircraft are some of the key factors that complement growth of the flight simulator adoption across the world. 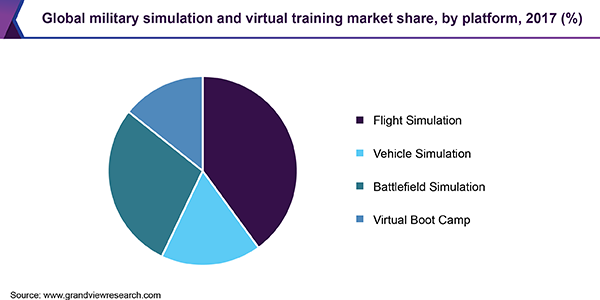 The virtual boot camp segment is anticipated to expand at a CAGR of 5.1% over the forecast period. Factors such as territorial disputes, external and internal security threats, and increasing investments in the modernization of the military and associated training will contribute to the growth over the forecast period. Virtual boot camp simulators are highly effective in Air Force, Navy, and Army as it helps them learn relevant physical fitness routines, and kill drill requirements during boot camp. The simulator also requires fewer instructors and help freeing up many trainers for other necessary duties.

North America was valued at USD 3.82 billion in 2017. North American countries have mandated the procurement of these solutions owing to their policy of keeping its army troops ready for deployment in war-like situations at a short notice. The U.S. Air Force is focusing on minimizing the flying hours to reduce time and cost. Some of their programs include the army's Live Training Transformation (LT2) systems, F-35 aircraft simulators, US Air Force’s F-16 Training System, and Long-Range Strike-B simulators, among others.

Asia Pacific witnessed the highest CAGR of 5.0% from 2018 to 2025. Countries, such as China and India have increased their military expenditure thus, supporting the procurement of these equipment. Additionally, focus on offering cost-effective and best-in-class training to forces is expected to propel the regional demand. Few major programs include Rafale simulators and fifth-generation aircraft simulators by India, the J15 flight simulators and J-13 flight simulators by China, and Sea 1000 future submarine simulators and the Helicopter Aircrew Training System (HATS) program by Australia, among others.

The key players are focusing on add-on acquisition strategies to boost their industry presence.

The market is consolidated in nature owing to the presence of a limited number of manufacturers offering these technologies and solutions. The industry participants are expected to continue to seek strategies such as acquisitions and product launches, as the military simulation and training market is still in the development phase. Many key players adopted contractual agreements as their key strategy to achieve growth in the market. For instance, in 2016, L-3 Communications Holdings, Inc. signed a contract with the Polish Air Force to supply F-16 Trainer Support. Some of the prominent players in the military simulation and virtual training market include:

This report forecasts revenue growth at global, regional, and country levels and analyzes the latest industry trends in each of the sub-segments from 2015 to 2025. For this study, Grand View Research has segmented the global military simulation and virtual training market based on platform, application, and region: