The global simulation software market size was valued at USD 9.6 billion in 2020 and is expected to expand at a compound annual growth rate (CAGR) of 17.1% from 2021 to 2028. Simulation software is a tool used to virtually create a real-time environment to test the applicability and efficiency of different products and processes. Benefits such as a reduction in production expenditure and reduced costs of training are expected to drive the market for simulation software. Furthermore, simulation tools play a major role in determining the effects of military weapons. They also help automotive companies determine the ideal vehicle prototypes for reducing CO2 emissions. 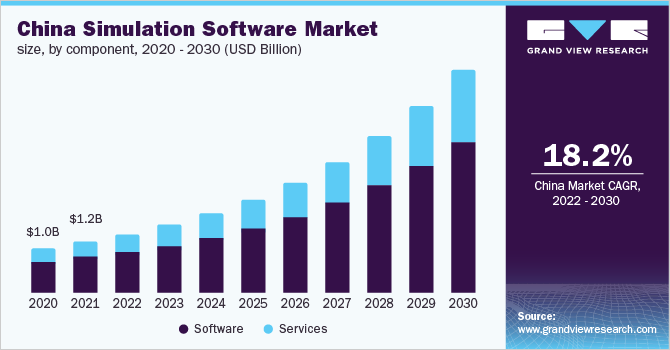 Conventionally, manufacturers incurred huge costs while prototyping products, which involved complex mechanisms. In spite of the availability of prototypes, the chances of failure were high, which incurred additional R&D expenses to reduce such product failures. Expenses incurred on prototypes and curbing faults of the existing products led to increased pre and post-production costs. In such scenarios, the use of simulation software helps reduce the need for manually testing multiple prototypes to subsequently reduce the chances of product failures. This is encouraging companies to make investments in simulation tools.

Manufacturers across the globe are making investments to develop AI-related technologies to cope with the Volatile, Uncertain, Complex, and Ambiguous (VUCA) world. Virtual testing techniques are used to test these AI-enabled devices and involve the observation of the behavior of these devices in real-time situations. The use of the virtual testing method increases the efficiency of a product development process and simultaneously reduces the product development cost. This growing focus on AI devices and products is expected to lead to the adoption of virtual testing tools.

Moreover, the industry is witnessing growth owing to the emergence of autonomous vehicles and EVs. The automotive manufacturers are using simulation tools to test the efficiency and effectiveness of these vehicles using real-world situations. They are also using simulation software to meet different industry standards and regulations. In September 2018, BMW Group announced investments of approximately USD 115.0 million to establish a high-fidelity driving simulation center in Munich, Germany.

The software segment dominated the market for simulation software and accounted for the largest revenue share of more than 52.0% in 2020. The segment is expected to remain dominant over the forecast period. The segment growth can be attributed to benefits such as data safety, reliability, and uninterrupted testing. Furthermore, under the software segment, finite element analysis is expected to largely contribute to the growth of the segment. FEA is widely used in industries such as automotive, aerospace, defense, and electronics to test product quality, performance, and design.

The service segment is expected to register the highest CAGR over the forecast period. The growth of the segment can be attributed to the growing awareness of virtually enabled processes used for product development among companies and governments. Services such as design and consulting, implementation, and maintenance are gaining popularity among various enterprises. ANSYS, Inc., one of the key players in the market, provides consultation and professional services for simulation workflow improvement and process compression.

The on-premise segment dominated the market for simulation software and accounted for the largest revenue share of over 52.0% in 2020, owing to the early adoption of the software. On-premise deployment is a traditional deployment method that involves the installation of the software on-site. This method is beneficial for companies who wish to maintain the confidentiality of their data and secure the data from hackers. These benefits related to data confidentiality and security are the primary factors driving the growth of the segment. The segment is expected to account for the highest market share by 2028.

The cloud segment is expected to register the highest CAGR over the next seven years. The growth of this segment can be attributed to the benefits offered, including easy implementation and cost-effectiveness, as compared to the traditional on-premise software. Since the software is deployed over the cloud, it is easier to maintain and upgrade based on a client’s requirements. Moreover, cloud-based software can be used in applications such as R&D and training & education.

The automotive segment dominated the market for simulation software and accounted for the largest revenue share of more than 25.0% in 2020 owing to the early adoption of virtual tools for product development. Furthermore, the automotive industry is witnessing a shift toward the use of electric and autonomous vehicles. The use of simulation to enhance production processes in this industry is primarily driving the growth of this segment. Further, based on end-use, the market for simulation software is also segmented into aerospace and defense, electrical and electronics, industrial manufacturing, healthcare, and others. The others segment includes industries and sectors such as construction, retail, and telecommunications. 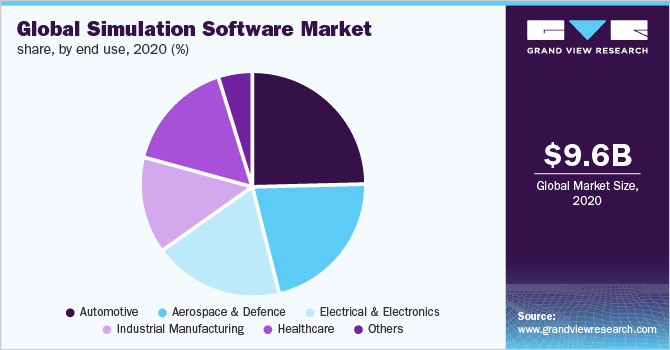 The aerospace and defense segment is expected to grow at a considerable rate over the forecast period. This growth is attributed to the use of simulators for designing aircraft as well as defense equipment. Also, simulators are used in the defense industry for the purpose of training soldiers. Growing concerns of governments of developed as well as developing nations for terrorism and national security has resulted in increased investment for new and improved defense equipment that require the use of simulation software which in turn has contributed to the growth of this segment.

North America dominated the simulation software market and accounted for the largest revenue share of 34.7% in 2020. The region is expected to continue its dominance over the forecast period. The growth of the region can be attributed to the presence of major players operating in the U.S. and Canada. The companies in these countries have been observed to be investing in research and development activities in order to introduce technologically advanced products in the market for simulation software. Moreover, the region is well-known as an early adopter of advanced technologies.

The market players are trying to gain higher market shares through the adoption of strategies such as partnerships, investments, and mergers and acquisitions. Additionally, the companies also actively made efforts to combat the COVID-19 situation by offering simulation analysis pertaining to the spread of the disease. Further, the companies are also launching new products and services and are also focusing on maintaining competitive prices.

The use of simulation software is enabling automobile manufacturers to test multiple variants of a vehicle across various driving terrains and situations before determining and finalizing the ideal prototype of the vehicle. Therefore, these manufacturers are opting for full-fledged implementation of simulation software. For instance, in September 2018, BMW Group announced that the company planned to establish a simulation center in Munich. The facility would be equipped with a high-fidelity simulator capable of representing rotational, longitudinal, and transverse movements of a vehicle in real-time. Some of the prominent players in the simulation software market include:

This report forecasts revenue growth at global, regional, and country levels and provides an analysis of the latest industry trends in each of the sub-segments from 2016 to 2028. For the purpose of this study, Grand View Research has segmented the global simulation software market report based on component, deployment, end-use, and region:

How big is the simulation software market?

b. The global simulation software market size was estimated at USD 9.6 billion in 2020 and is expected to reach USD 11.2 billion in 2021.

What is the simulation software market growth?

Which segment accounted for the largest simulation software market share?

b. The automotive segment dominated the simulation software market with a share of 24.5% in 2019. This is attributable to the early adoption of virtual tools for product development in the automotive sector.

Who are the key companies/players in the simulation software market?

What are the factors driving the simulation software market?

b. Key factors that are driving the simulation software market growth include the introduction of autonomous & electric vehicles and benefits offered by software in terms of production expenditure and training costs.