The global mobile application market size amounted to USD 187.58 billion in 2021 and is projected to grow at a compound annual growth rate (CAGR) of 13.4% from 2022 to 2030. Applications for gaming, mobile health and fitness, music and entertainment, social networking, retail and e-commerce, and other purposes are all included in the study's scope. The ubiquity of smartphones, rising internet usage, and the use of technologies like artificial intelligence and machine learning in mobile applications all point to future growth in demand for mobile applications (apps). Additionally, the aforesaid applications are typically downloaded from application distribution websites like the Google Play Store and the App Store for iOS. 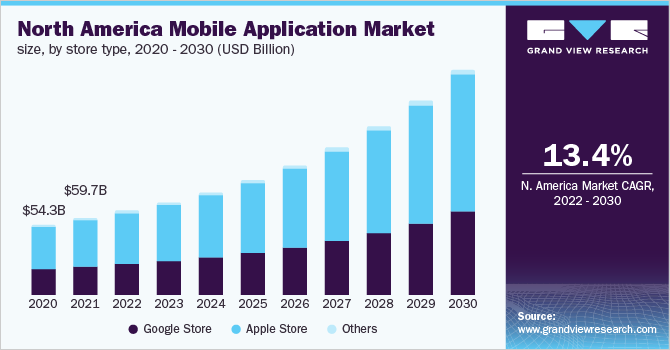 The primary driver of market growth is the remarkable increase in Internet usage, particularly in developing nations such as Brazil, China, and India. Over the past decade, the Internet has materialized as the prime mode of communication via several gadgets, including tablets, smartphones, and laptops, among others. The number of mobile app buyers has increased in recent years due to growth in the e-commerce industry, various discounts, and offers, and product assortment that is only available on e-platforms. The accessibility of low-cost data plans and packages from telecom operators, which decreases the price of the internet and entices more online users is another parameter accelerating mobile application downloads throughout all platforms.

The increased internet penetration and gaming technology have continued to improve, resulting in more accessibility to mobile games. Games such as Pokémon Go use sensors such as motion sensors, gyroscopes, and accelerometers in tablets and smartphones to ensure the capability of Augmented Reality (AR) and Virtual Reality (VR) on the mobile phone through various apps. Moreover, primarily there are three revenue models, comprising in-game purchases, paid game applications, and in-app advertisements that games and application developers follow.

With the growing popularity of mobile gaming, a survey study highlights that around 5 to 10% of gamers are willing to pay for game applications, which is a double-digit increase from 2018. Furthermore, it is a proven fact that once users approve the value of an application and have an urge to unlock extended functionalities, they tend to perform more in-app purchases. Games like Pokémon GO, Candy Crush Saga, and Clash of Clans are some gaming applications that earn more through in-app purchases than any other revenue channel.

In the wake of the recent coronavirus (COVID-19) outbreak, the social media-, gaming-, and entertainment-based applications had the highest number of downloads compared to other applications. Furthermore, the demand for e-commerce, healthcare, and educational applications has also witnessed strong growth. In educational apps, the shift to remote learning has provided lucrative growth opportunities to several online portals and tech companies such as Google Classroom, Zoom, and Microsoft Teams.

The Apple Store segment had the largest market share, accounting for more than 62.88 percent of global revenue in 2021. The segment's high share is primarily due to iOS apps' relatively higher rate of monetization for revenue generated by in-app purchases and premium apps. Additionally, an increase in iPhone and iPad users globally is contributing to the segment's growth. Furthermore, mobile game spending will account for a sizable revenue share in 2021.

Moreover, in terms of the number of downloads, the Google Play store segment accounted for the highest share in 2021 and is anticipated to continue its dominance during the forecast period. Also, there has been a massive growth in Android smartphone sales over the past few years, with many new competitors such as OnePlus and Xiaomi Corp. challenging the existing and leading players such as Samsung and iPhone. The emergence of new Android smartphone manufacturers has led to the introduction of a wide range of mobile applications on Google's Play Store.  The introduction of a wide range of mobile applications, coupled with a huge consumer base ensures a strong growth prospect for the Google Play store during the forecast period.

The gaming application segment of the mobile application market held the largest revenue share of more than 42.94% in 2021. Furthermore, the segment is anticipated to continue its dominance during the forecast period due to an unprecedented rise expected in the gaming population and resultantly the number of mobile gaming applications in economies such as China and India. Additionally, the three main Operating System (OS) platforms used to create mobile games are iOS, Android, and Windows. The number of games downloaded on Android OS in 2019 was large, but iOS generated more revenue because paid games are more prevalent. 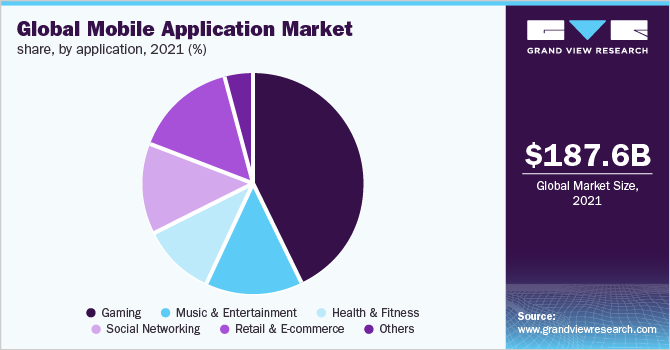 North America dominated the market and accounted for over 31.83% of the revenue share in 2021. The high market share is accredited to the presence of several players in the region, such as Apple Inc.; Hewlett Packard Enterprise; Google LLC; Netflix Inc.; and Microsoft Corporation. High smartphone adoption, strong in-app consumer spending, and a relatively higher number of smartphone application downloads have all resulted in a large market share. In aspects of paid mobile games, in-app billing, and a rapidly increasing mobile app user base, the U.S. is expected to rise as a hugely profitable market for mobile games applications.

The Asia Pacific is expected to emerge as the fastest growing regional market given the potential the region holds in terms of internet penetration and smartphone adoption. India and China are anticipated to remain the major markets, offering strong growth opportunities to all participants across the mobile application ecosystem. Furthermore, growing disposable income coupled with government initiatives such as Digital India is expected to favorably impact regional market growth in the forthcoming years. Moreover, the availability of low-cost data usage packs and advancements in networking are other key growth boosters in regional growth.

The market is highly fragmented with the presence of many developers. Some market players are engaged in acquisitions and partnerships to expand their capabilities. For instance, in November 2018, GOQii announced that the company has raised funding from Mitsui & Co., Ltd., which is a Japanese conglomerate and an active healthcare investor. Following the initiative, GOQii aimed at increased penetration across India, as well as to enter Japan’s market by providing its offerings via its health store. Some prominent players in the mobile application market include:

This report forecasts revenue growth at global, regional, and country levels and provides an analysis of the latest industry trends in each of the sub-segments from 2017 to 2030. For this study, Grand View Research has segmented the mobile application market report based on the store type, application, and region:

How big is the mobile application market?

What is the mobile application market growth?

Which segment accounted for the largest mobile application market share?

b. North America was one of the dominating regions in the mobile application market with a share of 31.83% in 2021. This is attributable to the presence of numerous players in the region, such as Apple Inc., Google LLC, Hewlett Packard Enterprise, Netflix Inc., and Microsoft Corporation, among others. Also, strong in-app consumer spending, high smartphone penetration, and a relatively greater number of mobile application downloads have collectively ensured a high market share of the region.

Who are the key players in the mobile application market?

What are the factors driving the mobile application market?

b. Key factors that are driving the mobile application market growth include smartphone proliferation, increased internet penetration, and growing use of technologies such as machine learning and artificial intelligence in mobile apps.