The global motion sensor market size was valued at USD 5.2 billion in 2018, registering a CAGR of 7.8% from 2019 to 2025. The onset of the development of smart homes and rise in the number of household applications such as automated lighting control and home control is anticipated to propel the market. In addition, proliferation of smartphones, wearable devices, and tablets is likely to supplement market developments in the near future. The growing use of robotics employed for household and commercial applications that incorporate motion sensors and sensing technologies are further expected to impel market growth. 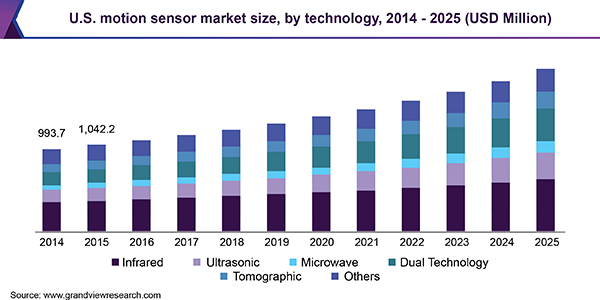 The extensive use of Micro-electro-mechanical Systems (MEMS) technology has resulted in miniaturization of motion sensors and this bodes well for the market. Increasing adoption of MEMS-based motion sensors can be attributed to need for detection and prediction of natural calamities such as tsunamis, earthquakes, and volcanic eruptions. For instance, the State of California has deployed an earthquake early warning system that uses motion sensors installed across the state for the detection of earthquakes. In addition, the widespread usage of motion sensors in noise, vibration, and harshness indicators as well as step and distance counters for smartwatches has increased product demand.

The market is in its nascent stage and over the coming years it is anticipated to replace manually controlled devices to a large extent. For instance, battery-operated remote controls are now being replaced by gestures and movements without any physical need for devices. In 2018, Intel Corporation developed an advanced form of motion sensing technology that enables TVs to adjust volume and change channels as per a user’s gestures. The major interests of manufacturers vests in driving the demand for advanced generation of processors and semiconductors through innovation.

One of the major factors driving the market is rise in the number of regulations and standards of lighting implemented by various public safety agencies with a focus on reducing electricity consumption for lights. For instance, the American Society of Heating, Refrigerating and Air-Conditioning Engineers (ASHRAE) and the International Code Council have developed the 90.1-10 and International Energy Conservation Code (IECC) energy codes respectively, for new or renovated buildings to minimize energy consumption. In U.S., the International Energy Conservation Code (IECC 2012) mandates the use of motion sensors in classrooms, conference rooms, break rooms, private offices, restrooms, storage rooms, janitorial closets, and all spaces 300 sq. ft. or less. These standards are driving the demand for motion sensors.

However, there are certain factors that are expected to challenge market growth. Motion sensors are immune to false alarms, such as activated by blowing winds, pet activities, and emission of fluorescent lights. For instance, the movement of tree branches could trigger a microwave sensor, resulting in a false alarm. Similarly, changes in luminous intensity of lights may trigger an infrared sensor. However, such false alarms can be avoided by using dual technology sensors.

The infrared segment dominated the market in 2018. The demand for infrared cameras has grown in recent years owing to technological advancements in the field of motion sensors. For instance, a pyroelectric infrared sensor exhibits high accuracy in detecting humans and animals. Moreover, infrared motion sensors are being increasingly adopted for applications such as residential security and surveillance. In addition, their ability to be easily calibrated make them suitable for aerospace and defense as well as other applications such as healthcare and consumer electronics.

Dual technology is anticipated to emerge as the fastest-growing segment over the forecast period. These sensors use a combination of more than one technology such as passive infrared-microwave or passive infrared-ultrasonic technologies. This hybrid approach makes dual technology sensors highly reliable even in areas with obstructions and dividing walls. As the scope for consumer electronics is widening, dual technology continues to gain momentum. The major advantage provided by this product variant is it is capable of reducing the probability of false alarms.

Based on application, the motion sensor market has been segmented into consumer electronics, automotive, aerospace and defense, healthcare, industrial, and others. The consumer electronics segment held the largest share in the market in 2018 owing to increasing demand for multimedia devices with features such as motion stabilization and indoor navigation. Furthermore, emergence of sensor fabrication techniques such as MEMS has considerably reduced the size of motion sensors that has enabled them to be deployed in handheld consumer electronics. These devices include mobile phones, portable media players, and gaming consoles. 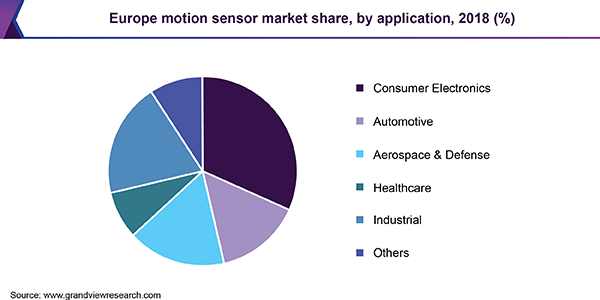 Europe accounted for the largest share in the market in 2018 and is expected to register the highest CAGR during the forecast period. Europe being home to some of the premium automobile manufacturers is expected to significantly contribute to the growth of the automotive application segment of the market. Motion sensor applications in the automotive industry include driverless cars, Advanced Driver Assistance Systems (ADAS), and airbags, all of which are expected to drive product demand.

The Asia Pacific market is anticipated to emerge as the fastest-growing segment over the forecast years. Technological developments such as IoT and wireless sensors networks in the region have led to rise in popularity of concepts such as smart home and robotic kitchen, which is expected to drive product demand. Furthermore, countries such as China and Japan are regarded as the manufacturing and assembling hubs for consumer electronics manufacturers such as SAMSUNG and Sony Corporation. These factors are expected to further propel product demand in the region.

Innovation, product launches, mutual agreements, and partnerships are some of the major strategies adopted by players in order to strengthen their geographical presence and enhance their market position through effective branding. Bosch Sensortec unveiled its new motion sensor - BMA456 at Sensors Expo & Conference in San Jose, California. BMA456 is a hearable accelerometer that comes with enhanced hearable features incorporated in a single sensor. The company claims it is an advanced version of the existing BMA456 wearable variant.

This report forecasts revenue growth at global, regional, and country levels and provides an analysis on latest industry trends in each of the sub-segments from 2014 to 2025. For the purpose of this study, Grand View Research has segmented the global motion sensor market report based on technology, application, and region: