Road traffic accidents have become a great challenge for public authorities in terms of efforts and finding sustainable solutions for effective prevention. According to a report published by the United Nations Motorcycle Helmet Study in 2016, motorbike riders are 26 times more prone to injuries in a road crash than passenger car drivers. In addition, the research study indicated that wearing a helmet can improve the chances of survival by 42% and can help avoid injuries by 69%. Rising awareness and efforts to promote riders’ safety are anticipated to drive market growth. 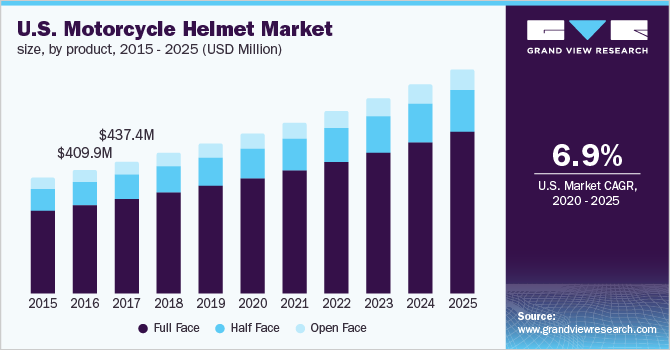 Governments around the world are taking the required steps for the avoiding increasing number of deaths caused by road accidents. According to the Global Status Report on Road Safety 2013, published by the World Health Organization (WHO), the total number of deaths due to road traffic crashes was 1.24 million annually. Only 28 countries around the globe, which accounted for 7% of the world’s population in 2018, have extensive road safety laws on major factors such as motorcycle helmets, seatbelts, child restraints, drinking and driving, and speeding among others.

In addition, according to a report, Traffic Safety Basic Facts 2018 - Motorcycles & Mopeds published by the European Commission, in 2016, around 25,600 people were killed in road accidents throughout the EU. These factors have propelled the adoption of helmets for moped and bike riders as well as passengers.

Motorcycle helmets are considered an essential safety gear by many motorcycle riders. Furthermore, many manufacturers of motorcycle helmets have been coming up with high-end features to encourage consumers to wear a helmet. Few manufacturers are close to coming up with helmets featuring built-in Augmented Reality (AR) to display GPS maps and the speedometer on the helmet’s visor. For instance, in July 2018, Jarvish, a Taiwan-based firm, launched a motorcycle helmet made from pure carbon fiber that features a rear camera and a head-up display unit that can display speed, weather conditions, and navigation, set up via the JARVISH application.

Growing inclination toward technologically advanced products has enthused many startups venturing into the motorcycle helmet domain to offer innovative products. In 2014, an Australia-based company, Forcite Helmet Systems, entered the market with a large inventory of helmets with an inbuilt ultra-wide-angle HD camera. Recently, in July 2019, Forcite launched its MK1 smart motorcycle helmet with a unique LED visual communication strip that provides additional features such as an HD wide-angle camera, Bluetooth port unit, Voice over Internet Protocol intercom (VOIP), and a handlebar-mounted control unit.

Motorcycles are among the most popular two-wheelers owing to the growing middle-class population and young population globally. Purchasing a motorcycle eliminates the need for an individual to rely on public transport and helps them reach their destination faster. These vehicles are mainly popular among men and help them to maneuver through traffic faster, thereby driving the demand for motorcycles. This increases the application of motorcycle helmets which is directly proportional to two-wheeler sales.

The rising prevalence of counterfeit helmets continues to impede market growth. Counterfeit/fake helmets are those helmets that are falsely sold and marketed at a relatively cheaper price. According to the World Health Organization, close to 360,000 fatalities and 1.5 million injuries can be linked to defective low-quality vehicle parts and gears every year.

These helmets may not be capable of providing appropriate comfort and protection to wearers, as these products are usually manufactured using low-quality materials. The presence of counterfeit products also affects the consumer’s perception of the brand. The circulation of counterfeit helmets is more pronounced in Asian markets, particularly in China, Pakistan, and India. Furthermore, the increasing demand for various types of helmets, such as theme-based, athletic, designer, and sports helmets has led to the flow of hundreds of thousands of counterfeit helmets flooding Asian markets. According to the U.S. Government Accountability Office, 88% of the counterfeit products in the U.S. originate from China or Hong Kong. The easy availability of counterfeit products is likely to limit the growth of the market for helmets during the forecast period.

Full face helmets were the largest product segment, with a market share of more than 70% in 2018. It is expected to maintain its dominance throughout the forecast period. Manufacturers are adopting advanced materials including carbon fiber and fiberglass reinforced plastic to reduce the weight of full-face products as well as to make them safer. In addition, vendors are integrating advanced communication tools such as Bluetooth in helmets, which in turn is likely to open new business avenues over the forecast period.

Major manufacturers such as Dainese SpA, HJC Europe S.A.R.L, Shoei Co. Ltd, and Arai Helmet Ltd are launching new products to cater to the rising product demand. For instance, in April 2019, HJC Europe S.A.R.L, which pioneered in manufacturing high-quality motorbike helmets for both public and racers launched an advanced full-face helmet for riders under the brand name C70. This product is made from an advanced polycarbonate shell and is equipped with Advanced Channeling Ventilation System (ACS).

Online channels are expected to expand at the fastest CAGR of 7.4% from 2018 to 2025 owing to ease of shopping and convenient product delivery. Moreover, online retailers such as Amazon and HELMEXPRESS.COM among others are focusing on this product category to capitalize on the rising product demand. In addition, e-commerce platforms, social media, and Google Ads play an essential role in influencing consumer preference.

The availability of high-speed internet and smartphones in developing countries such as India, China, Indonesia, and Vietnam is expected to promote the utilization of online platforms of for purchasing motorcycle helmets. The companies are launching their exclusive websites where consumers can buy genuine products directly from the source. 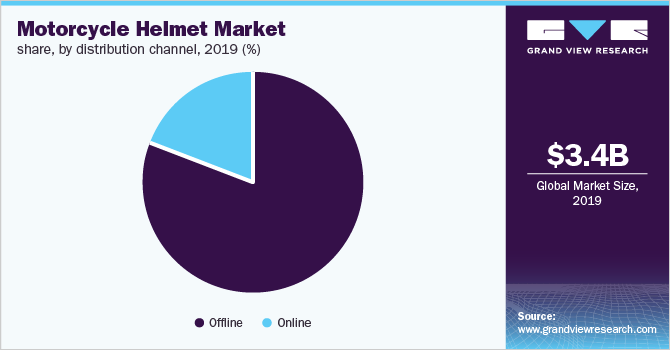 Offline distribution channel held the largest market share of more than 80% in 2018. Street vendors, convenience stores, and supermarkets are the major distribution channels in developing countries such as Thailand, Indonesia, Bangladesh, China, and India among others. Some of the local manufacturers sell the products through offline channels at prices lower than premium brands.

The Asia Pacific held the largest market share of more than 50.1% in 2019 owing to the strong buyer foothold of the two-wheeler market in countries such as India, China, Indonesia, and Vietnam. Major manufacturers including, Dainese SpA, HJC Europe S.A.R.L, Shoei Co. Ltd, Arai Helmet Ltd, and Schuberth GmbH are launching new products to gain maximum customer penetration in the region.

For instance, in January 2019, Steelbird Helmets launched a product called SA-1, which is considered the world’s first helmet for the Indian market. The product is equipped with NACA duct Airflow Technology that can dehumidify the interiors of the helmets. In addition, these helmets come with a wide range of visors including smoke visors, iridium coated, night vision, and especially photochromic visors.

The Chinese motorcycle helmet market has evolved and accounted for a significant market share of around 35% of the Asia Pacific market in 2018. Efforts to reduce the usage of petrol-based two-wheelers and control pollution in some of the major cities have resulted in a decline in motorcycles in the country. However, the demand for helmets has been on the rise due to the growth of electric two-wheelers. 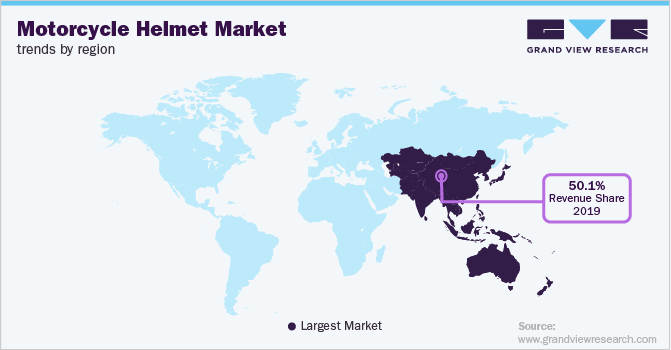 India is the fastest-growing market for motorcycle helmets in the global market owing to a large number of two-wheeler buyers in the country. The growth of helmets is not only led by commuter motorcycles but even by larger and more expensive two-wheelers. Further, the development of infrastructure in rural areas is also driving the sale of two-wheelers, and in turn, is anticipated to boost the demand for helmets.

Furthermore, key manufacturers are adopting market strategies such as new product launches, expanding distribution channels, and mergers & acquisitions, to gain the maximum customer base. For instance, in October 2018, Steelbird Helmets entered into an Off-take agreement with KUKKA Helmet, a renowned French helmet brand. With this agreement, the former will manufacture and sell KUKKA Helmets in India.

This report forecasts revenue growth at global, regional, and country levels and provides an analysis of the latest industry trends in each of the sub-segments from 2015 to 2025. For the purpose of this study, Grand View Research has segmented the global motorcycle helmet market report on the basis of product, distribution channel, and region: 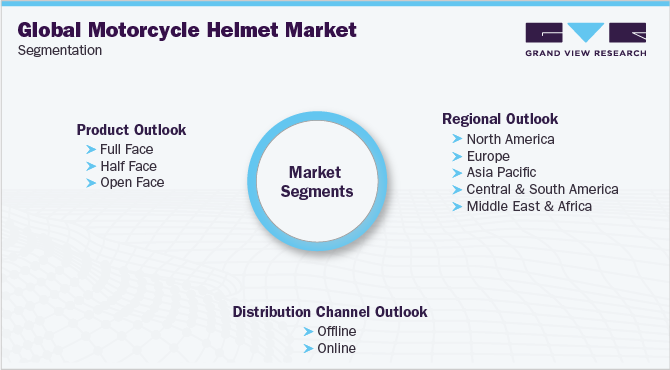