The global movies and entertainment market size was valued at USD 90.92 billion in 2021 and is expected to expand at a compound annual growth rate (CAGR) of 7.2% from 2022 to 2030.With favorable demographics, changing consumption pattern, a rise in disposable incomes, and the propensity to spend on leisure and entertainment is driving the market growth. However, the COVID-19 pandemic has adversely impacted the growth of the market. Due to COVID-19 guidelines imposed in various countries theaters were closed, thus, impacting the growth of the market. For instance, according to a blog published by Livemint, nearly 10,000 theaters were closed from mid-march of 2020. Moreover, a major American movie theater chain said that it would temporarily shutter hundreds of locations in the U.S. and the U.K. 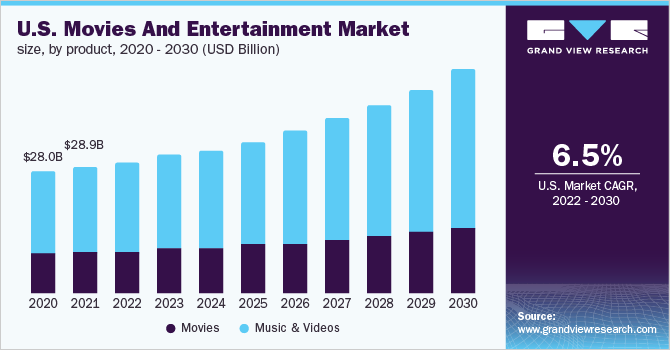 Moreover, the rising popularity of 3D movies that provide audiences with a virtual reality experience is expected to fuel the market (VR). New marketing and distribution platforms, such as IPTV, digital newspapers, DTH, and digital cable, as well as online music and movie sales, are expected to accelerate industry growth.

Additionally, the availability of music, as well as video content on streaming platforms, makes music more accessible to everyone anywhere. Several other benefits of streaming platforms including the much superior sound quality of streamed content are contributing to the growth of the market. Moreover, subscribers can easily create their audio and video playlists, thus increasing the popularity of these platforms among millennials is likely to favor the market growth.

Major players have adopted strategies like regional expansions and distribution partnerships to venture into untapped markets. A number of these players have now been focusing on the production of regional content to establish a strong connection with the audience in these markets. For instance, in February 2021, Disney+ launches the Star brand in Australia, New Zealand, Western Europe, and Canada.

New talent has risen as a result of easy access to an audience via numerous channels such as television and the internet. Industry success in emerging areas is fueled by increased usage of mobile communication and the internet in nations like China, South Korea, and India. As a result, global market stagnation caused by the maturing of major markets such as the United States is overcome by increased demand and rapid progress in Asian countries.

Revenue generation is restricted due to high piracy rates and lower profit margins through online streaming. The number of new entrants in the online streaming business is observed a rise. Developments in cybersecurity laws and tightening legal actions against piracy are expected to reduce losses for the players.

In terms of revenue, movies dominated the market with a share of 55.4% in 2021. Over decades’ movies have become a significant part of most cultures across the world. The prominent place of cinema in people’s life has made its primary means of entertainment in most countries. Moreover, developments in technology, acceleration in production, improved quality, and better storage solutions, are driving the growth of the movies segment.

Various strategic initiatives such as product launches are helping companies address the evolving needs of customers and gain a competitive edge over other players. For instance, in April 2020, beIN Media Group, LLC launched a new cinema service that offers the latest international movies. The company announced ground-breaking cooperation with film distributors so that it can provide the latest movies straight to subscribers before they are seen in the cinema. 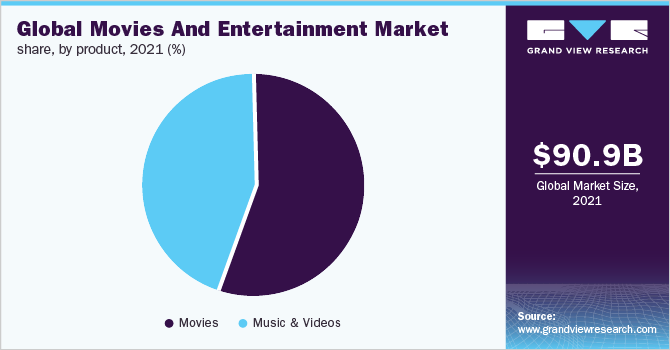 Music & videos is estimated to register a CAGR of 7.5% during the forecast period. Change in operational strategies of music companies such as a partnership with online streaming service providers and radio broadcast companies is attributive to this positive growth. For instance, in November 2021, Netflix partnered with Spotify to enter the audio market. Through this Netflix aims to centralize audio productions related to Netflix content.

Additionally, the growing popularity of digital platforms and the increasing adoption of smart devices will contribute positively to industry growth over the forecast period. Music streaming platforms such as Gaana, JioSaavn, Spotify, Wynk Music, Google Play Music, and Apple Music are increasingly getting popular among consumers and favoring the growth of the music & video segment.

North America dominated the movies & entertainment market with a share of 34.5% in 2021. This is attributable to the presence of Hollywood, the most established film industry in the world. In addition, the highest number of screens in the region contributes to its larger share of the revenue. For instance, according to the National Association of Theatre Owners, the number of movie screens in the U.S. was estimated to be 40,998 in 2020.

Asia Pacific is expected to register the highest CAGR of 8.2% from 2022 to 2030. The growth is majorly attributed to the rising expenditure of the consumers on leisure and entertainment. Moreover, the shifting focus of key players towards the untapped markets such as India is driving the market growth in the region.

Additionally, competitors are observed to concentrate on the production of regional content to increase their sales in these regions. The growing popularity of Chinese, Japanese, South Korean, and Indian movies & music is anticipated to further drive growth. The rising popularity of music & videos from other developing countries such as India, the Philippines, Vietnam, and Australia is further estimated to support the market growth in the region.

The market is characterized by the presence of a few established players and new entrants. Many big players are increasing their focus on the emerging trend of movies & entertainment. Players in the market are diversifying the service offering in order to maintain market share.

This report forecasts revenue growth at global, regional & country levels and provides an analysis on the latest trends and opportunities in each of the sub-segments from 2017 to 2030. For this study, Grand View Research has segmented the global movies and entertainment market report on the basis of product and region:

How big is the movies and entertainment market?

What is the movies and entertainment market growth?

Which segment accounted for the largest movies and entertainment market share?

b. North America region dominated the movies and entertainment market with a share of 34.55% in 2021. This is attributable to the highest number of screens and Hollywood has been successful in establishing its dominance in the industry and retaining its preeminence by adapting and changing according to audiences.

Who are the key players in movies and entertainment market?

What are the factors driving the movies and entertainment market?

b. Key factors that are driving the movies and entertainment market growth include the increasing popularity of 3D movies that give the audience experience of virtual reality and increased spending on entertainment and change in the lifestyle of people in emerging economies.