The global nicotine replacement therapy market size was valued at USD 44.2 billion in 2020 and is expected to expand at a compound annual growth rate (CAGR) of 16.3% from 2021 to 2028. The growth can be attributed to the growing number of technological advancements and the increasing number of people undergoing nicotine replacement therapy (NRT). Increasing awareness about the ill-effects of smoking is expected to be a key factor driving the market. The number of people who smoke is rising globally and has surpassed 1.1 billion. Owing to government initiatives such as the “affordable care act”, insurance regulations, and programs for awareness regarding the negative impact of smoking on health by provision of counseling, people are opting for smoking cessation therapies. In 2018, out of the 34.2 million people that smoke in America, 55% tried smoking cessation. 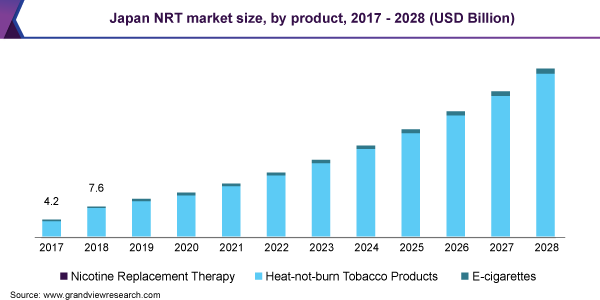 May 31st is celebrated as the No Tobacco Day and organizations such as the American Lung Association and the CDC work toward increasing awareness about the medical conditions that arise due to smoking. As per the NHS, 70% cases of lung cancer cases are a result of smoking. Furthermore, smokers are more prone to getting heart attacks. Annually, 480,000 people in the U.S. die because of smoking. The CDC runs a paid national campaign called the Tips From Former Smokers (Tips) to encourage healthcare providers to tell patients about the effects of smoking and support them in quitting smoking in safe ways.

Technological advancements in the nicotine replacement therapy segment are ongoing, which has led to a rise in the number of people switching to advanced products. Advancements like heat-not-burn products flavored chewing gums, and lozenges are expected to drive the adoption of NRT. The tobacco giants like British American Tobacco have come up with alternatives that are smokeless and less harmful. These advancements have a variable range of effectiveness and are accepted in society when compared to traditional cigarettes, thus driving their adoption and boosting the market growth.

However, the ban on e-cigarettes is one of the most crucial factors hindering the growth of the market. For instance, in September 2019, the Indian government banned the import, production, and sale of e-cigarettes. India is a nation with over 100 million smokers, and this could have been a great opportunity for market growth. In addition, other nations such as Mexico, Brazil, Malaysia, and Thailand have banned the use, import, and production of e-cigarettes in their countries. As of 2020, there are over 20 nations that have banned the use of e-cigarettes. This is expected to have a negative impact on the market growth.

The offline segment accounted for the largest revenue share of 83.9% in 2020. The availability of NRT products including transdermal patches, gels, gums, e-cigarettes, and heated tobacco products in the retail chains, such as Walgreens and Walmart Stores, Inc., supports the segment growth. In addition, the tie-ups of hospitals with these chains contribute to the growth of the market space.

The online segment is projected to witness the fastest growth during the forecast period. The comfort, flexibility, and convenience provided by the online purchase of medications is a major factor driving the segment. In addition, the discounts offered by online pharmacies are expected to fuel segment growth.

As per the Wiley Journal, in 2019, 17% of patients that combine patches with another form of NRT are able to quit smoking, while 14% are able to quit by using just one type of NRT. The report also suggested that higher nicotine concentration products (4 mg) are more likely to provide positive results than lower concentration (2mg) NRTs. 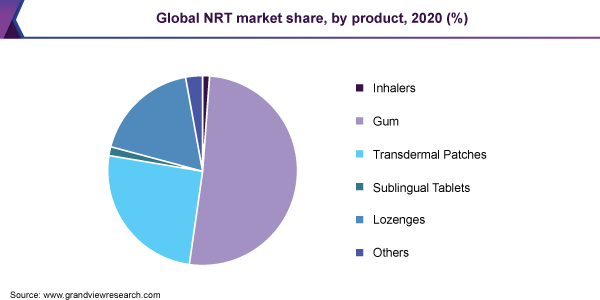 Heated or heat-not-burn tobacco products are likely to witness the fastest growth over the forecast period due to increasing product launches. An average heat-not-burn device needs tobacco sticks, plugs, a holder, a charger, and a capsule. The awareness amongst smokers regarding these products is high and over 25% want to try the product. Currently, 0.7% of adults in the U.S. are using HnB products, which constitute 2.7% of smokers.

Asia Pacific accounted for the largest revenue share of 40.6% in 2020 and is anticipated to be the fastest-growing regional NRT market over the forecast period. This is attributed to the high demand for such products, increasing market opportunities, and rising competition between the big tobacco companies, especially in Japan, which makes the market very dynamic.

North America held a considerable market share in 2020. The burden of diseases associated with smoking and the increase in the number of favorable government initiatives, coupled with increasing adoption of e-cigarette and heated tobacco, is expected to positively impact the growth of the North American market.

In April 2020, the U.S. FDA authorized the marketing and distribution of the IQOS Tobacco Heating System developed by Philip Morris Products S.A.  The product is an electronic device that heats the prefilled tobacco sticks to generate the aerosols. Furthermore, in May 2019, GlaxoSmithKline plc. introduced mint-flavored nicotine lozenges Nicorette under over-the-counter product.

The market for nicotine replacement therapy holds significant growth opportunities. Companies are adopting strategies such as mergers & acquisitions and partnerships to acquire a larger market share globally. In January 2017, British American Tobacco acquired 57.8% stakes in Reynolds American, Inc., making it a wholly-owned subsidiary of the firm. This gave the firm complete access to the company’s portfolio, along with direct access to the U.S. market. The company also received high shareholding brands of the U.S. market, such as Pall Mall. The acquisition was completed in July of the same year. Some prominent players in the global nicotine replacement therapy market include:

This report forecasts revenue growth at the global, regional, and country levels and provides an analysis of the latest industry trends and opportunities in each of the sub-segments from 2017 to 2028. For the purpose of this study, Grand View Research has segmented the global nicotine replacement therapy market report on the basis of product, distribution channel, and region:

How big is the nicotine replacement therapy market?

What is the nicotine replacement therapy market growth?

b. E-cigarettes dominated the NRT market with a share of 52.23% in 2019. This is attributable to its large-scale usage and increasing adoption. These products are commonly adopted by younger consumers, although, adoption is increasing steadily among middle-aged consumers.

Who are the key players in the nicotine replacement therapy market?

What are the factors driving the nicotine replacement therapy market?

b. Key factors that are driving the NRT market growth include a growing number of technological advancements and an increasing number of people undergoing nicotine replacement therapy.