The global e-cigarette and vape market size was valued at USD 12.41 billion in 2019 and is expected to expand at a revenue-based CAGR of 23.8% from 2020 to 2027. The market is expected to gain traction over the forecast period, owing to increasing product demand from millennials. The availability of a variety of e-cigarette options is anticipated to further fuel product adoption.

An e-cigarette is a battery-operated device that is considered as a safe alternative to smoking cigarettes. The industry is non-uniformly regulated as the effects of the devices are under review. Large tobacco companies have flourished by introducing these devices through various brands that cater to different requirements, thereby enhancing the product quality and level of customization. Moreover, emerging e-cigarette technologies, such as pod systems and squonk mods have increased its popularity in recent years. 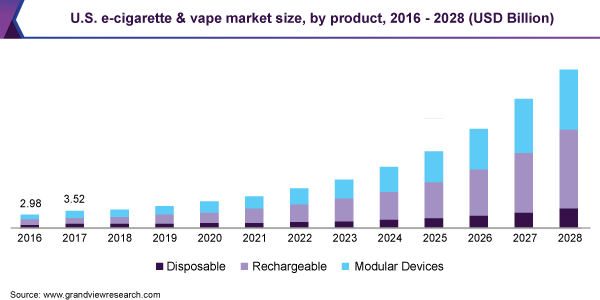 The market has evolved since 2014 as the devices have become more efficient in terms of battery life and the availability of various flavors, attracting a large number of customers. The cost-effectiveness of these devices has further accelerated product adoption in the market. The rising price of traditional cigarettes is anticipated to further encourage the demand for e-cigarettes and vape devices in the forthcoming years.

The market is driven by the growing awareness among the young population owing to various medical studies that term e-cigarettes as a safer alternative to traditional cigarettes. Moreover, the customization options offered by vendors and continuous improvement toward new product development is expected to drive the market growth over the forecast period. Technological advancements have led to the development of high capacity e-cigarettes that produce large quantities of vapor, which is witnessing increased preference among vapor enthusiasts. Vaping has helped a large number of smokers quit smoking thereby, making e-cigarettes an effective alternative to smoking.

The strict regulations levied by local authorities across the U.S., India, and Germany, among other countries have however restrained the growth of the market. Multiple countries have banned the distribution and sale of vapor products, which in turn has led to lower sales. Furthermore, stringent trading laws have made it difficult to import vaping devices for personal consumption. The vaping industry has formed various associations such as the American Medical Association (AMA), Consumer Advocates for Smoke-Free Alternatives Association, and Food and Drug Administration (FDA), to combat the policies against vaping products and to regularize the industry.

On the basis of product, the e-cigarette and vape market is segmented into disposable, rechargeable, and modular devices. The rechargeable segment generated the highest revenue in 2019. E-cigarette devices have evolved over the years, becoming smaller and safer. Rechargeable devices can be used for a longer duration by switching the cartridges containing e-liquid. Moreover, these devices cost fairly less, which is expected to increase their adoption.

Modular devices are anticipated to emerge as the fastest-growing product segment over the forecast period. These devices offer customization options that help users combine different parts to alter the flavor and the amount of vapor generated from the device. Technologies such as pod devices have increased the sale of vaping devices over the forecast period. Furthermore, vendors are coming up with various device configuration and across various price ranges that enables customers to purchase their desired device at a reasonable cost.

On the basis of the distribution channel, the market is segmented into an online and retail store. The retail store is further segmented into convenience stores, drug stores, newsstands, tobacconists, and specialty e-cigarette stores. E-cigarettes were initially sold in retail outlets such as gas stations and vape shops. The store helped users to choose from a wide variety of devices and e-liquid. Moreover, vape shops enabled users to test the device and e-liquid before making the purchase decision.

Companies started selling e-cigarettes online in late 2015. The benefits of online marketplaces, in terms of convenience, competitive pricing, access to a wider variety of products, are encouraging people to purchase e-cigarette and vape online. Websites offer a large variety of products as compared to retail stores. Moreover, sellers have their own websites from where users can purchase the products at a low price.

The vape mod segment dominated the market in 2019 and is expected to maintain its position over the forecast period. The availability of vape mods in various designs, such as regulated vape mods and unregulated (box) mods has led to an increase in the purchase of e-cigarettes. The introduction of vaping competitions has encouraged the sale of mods, especially box mods. Regulated mods are mostly meant for general usage. 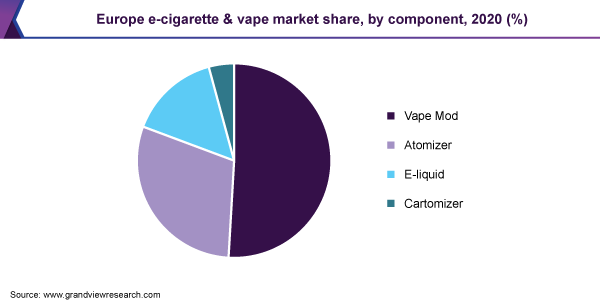 The availability of fruit, tobacco, dessert, and mixed flavors, among others, has encouraged the growth of the e-liquid segment. Flavors play an important role in attracting consumers, which is, subsequently impacting the demand for conventional cigarettes. Furthermore, the Do-it-Yourself (DIY) trend where users develop their own e-liquid by combining flavors, is anticipated to further fuel the growth of the market. E-liquid vendors are investing in Genomic Allergen Rapid Detection (GARD) assays testing strategy in order to meet the required standards in e-liquid ingredients and flavors.

North American dominated the market in 2019. The presence of key players such as JUUL Labs, Inc.; Philip Morris International Inc.; and R.J. Reynolds Vapor Company is anticipated to drive the growth. The young population has largely adopted vaping devices as a safe alternative to tobacco, which, in turn, is estimated to boost the adoption of these products. However, the current ban on some e-cigarette flavors including fruit and mint flavors in the U.S. to restrict the underage vaping in the country is expected to hamper the regional market growth to a certain extent.

Europe is anticipated to register considerable growth over the forecast period. The growing popularity of vaping devices has increased remarkably in recent years. Additionally, health bodies in the region are approving e-cigarette and vape from vendors, such as British American Tobacco Plc’s Vype and Imperial Brands Plc’s Blu as a better alternative to tobacco smoking. However, factors such as lack of awareness regarding the technology and stringent regulations concerning vaping in many regions are anticipated to hinder the growth.

The market is characterized by low entry barriers for new players since the new players can establish their business with minimal investments. Competition among the players is high and large companies acquire smaller companies to increase customer base and geographical reach. For instance, in November 2018, Japan Tobacco Inc. acquired Akij Group’s tobacco business in Bangladesh. This acquisition enabled the former to expand its operations in Bangladesh, thereby becoming the second-largest tobacco company in the country.

Companies invest actively in R&D for continuous innovation and new product development. For instance, in 2018, Altria Group, Inc. invested USD 252 million in R&D for the development of advanced e-cigarette and vape.

This report forecasts revenue and volume growth at the global, regional, and country levels and provides an analysis of the latest industry trends in each of the sub-segments from 2016 to 2027. For the purpose of this study, Grand View Research has segmented the global e-cigarette and vape market report based on product, component, distribution channel, and region:

How big is the e-cigarette and vape market?

What is the e-cigarette and vape market growth?

Which segment accounted for the largest e-cigarette and vape market share?

b. The rechargeable segment dominated the e-cigarette & vape market in 2019 and was valued at USD 5.34 billion and is expected to reach USD 6.50 billion in 2020.

Who are the key companies/players in the e-cigarette and vape market?

Which region accounted for the largest e-cigarette and vape market share?

b. North American regional e-cigarette & vape market held the largest share of 44.6% in 2019. The young population has largely adopted vaping devices as a safe alternative to tobacco, which, in turn, is estimated to boost the adoption of these products.

Which component segment is expected to show substantial growth in the e-cigarette and vape market?

b. In terms of component, the e-liquid segment is anticipated to show substantial growth during the forecast period, owing to the presence of a wide range of flavors, as well as the popularity of the DIY trend, where users develop their own e-liquid through combination of flavors.

What are the major driving factors of the e-cigarette and vape market?

b. The main drivers of the e-cigarette & vape market include increasing demand from millennials, presence of a variety of options in flavor, and the product being a safer alternative to traditional cigarettes as per studies.

What have been some of the restraints for the e-cigarettes and vaping industry?

b. The market restraints for e-cigarette and vape products include stringent regulations imposed by authorities in economies like India, Germany, and the US, and strict trading laws that make the import of vaping devices difficult for personal consumption.

What are the modes of distribution in the e-cigarette and vape market?

b. The major distribution channels in the e-cigarette & vape market include online and retail, with the retail segment being further classified into drug stores, convenience stores, tobacconists, newsstands, and specialty e-cigarette stores.

Which product segment is expected to show fastest growth in the e-cigarette and vape market?

b. The modular devices product segment is expected to show fastest growth in the e-cigarette & vape market during the forecast period, on account of the customization options provided by such devices.