The global non-halogenated flame retardants market size was valued at USD 1.5 billion in 2013 and is expected to expand at a CAGR of 8.2% over the forecast period. Non-halogenated flame retardants restrain or delay flame production to avert the spread of fire. They are added (additive) or chemically bonded (reactive) to the base material to induce fire retardancy to the manufactured products, mostly polymers, and textiles.

These retardants are devoid of halogens, which were earlier considered essential in flame retardants’ composition. The efficiency of some non-halogenated retardants is still compared to that of halogenated options available. However, this gap has also been covered by many manufacturers with the help of technology innovations. 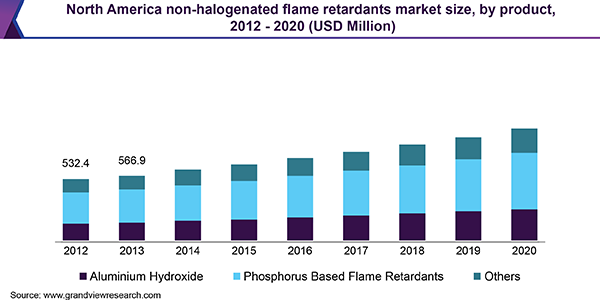 Flame retardants address the needs of durability, safety, and insulation in various applications. They produce less smoke and heat emissions apart from being recyclable, therefore they are preferred over bioaccumulation causing halogens, which are hazardous for human health and the environment. In addition to strict regulatory policies, many countries have banned the use of halogenated retardants, thus supporting the growth of this industry.

REACH and WEEE in Europe, Environmental Protection Agency in the USA, and CEPA in Canada are a few associations safeguarding consumers and the environment by regulating flame retardant policies. The market conditions have been favorable, thereby presenting growth opportunities for the non-halogenated flame retardants market. However, the processing of these products involves high loading levels and many other drawbacks, which are likely to hinder the market growth.

Aluminum hydroxide held the largest market share in terms of volume and is expected to expand at an estimated CAGR of 7.1% over the forecast period. Phosphorous based products accounted for over 50.0% share of the overall revenue in 2013. The segment is likely to be the highest revenue-generating segment despite being the lowest consumed segment.

Rising concerns over health and safety in several industries, specifically in the mature economies of Western Europe and the U.S., coupled with low-cost advantages involved in manufacturing aluminum hydroxide products, are expected to drive the market over the forecast period. Alumina based flame retardant namely alumina trihydrate (ATH) is an inexpensive non-halogenated flame retardant, which is extensively used in automobiles and electrical appliances. ATH finds its major application in polymers such as epoxy resins and unsaturated polyesters.

Phosphorus based products can be classified as organic phosphorus and inorganic phosphorus. Phosphorus based products are available in both reactive forms that are bound to the polymer as well as in an additive form that is mixed in the polymer. Increasing applications of phosphorous flame retardants, coupled with technological advancements, have been identified as the key factors driving the segment over the forecast period.

Key applications of non-halogenated flame retardants are polyolefins, epoxy resins, UPE, PVC, ETP, rubber, and styrenics. Polyolefin is a commonly used polymer owing to its characteristics such as ease in processing and better mechanical properties. Polyolefin finds its major application in wires and cables that are used in different industries such as electrical, construction, and transport. Various polyolefin products that use flame retardant additives are PP, PE, LDPE, LLDPE, MDPE, and EVA.

Epoxy resin finds applications in paints and coatings, electronic equipment, and adhesives. Flame retardant additives enhance the functioning of these resins by improving their fire resistance. These products are coupled with epoxy resins to be used in tapes, wires, and pipelines to protect the coatings from direct contact to a flame. Rapid industrialization in countries such as BRICS (Brazil, Russia, India, China, and South Africa), coupled with increasing demand for epoxy resins for durable coatings, is expected to drive the non-halogenated flame retardants market over the next few years.

Non-halogenated flame retardants are combined with ETP materials that are used for manufacturing automotive parts and medical equipment. North America and Western Europe are the mature markets for ETP, hence the growth is expected from rapidly growing economies such as China, India, Russia, and Brazil.

The construction sector accounted for over 35.0% share of the overall revenue in the year 2013. The furniture and textile industries accounted for a minor share both in terms of volume and revenue in 2013 and are expected to witness constant growth for the forecast period. The electrical industry is anticipated to expand at the highest CAGR of 7.8% in terms of volume. 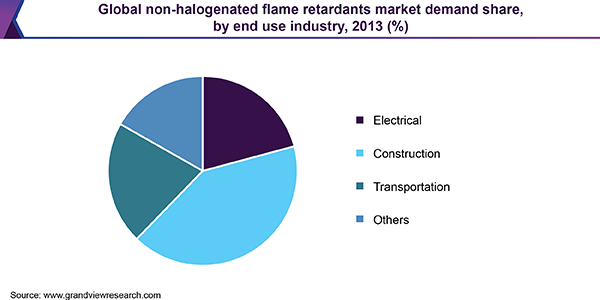 The rise in demand for safety materials for pipes and wires used in the electrical industry, coupled with developing electricity infrastructure in emerging economies such as Brazil, India, China, and Russia, is expected to drive the demand in this segment for the next few years. Major manufacturers of electronic equipment in countries such as China are forced to shift toward non-halogenated alternatives of flame retardants due to increasing environmental concerns in other regions such as Europe and North America.

North America emerged as the largest regional market, where aluminum hydroxide accounted for the major share among other retardants. American Chemistry Council’s North American Flame Retardant Alliance (NAFRA) is an organization in North America that supports producers, suppliers, and companies.

The market in the Asia Pacific presents growth potential for non-halogenated retardants, which are expected to replace the halogenated ones that have been majorly used in various industries in the region. Owing to global environmental regulations, the regional market is expected to gradually shift from halogenated to non-halogenated products. Besides, increasing construction spending, coupled with the growth of the automotive industry, particularly in emerging countries such as China and India, is expected to have a positive influence on the market growth over the next few years.

The market is fragmented in nature. Manufacturers are focusing on achieving a high degree of integration across the value chain, which is projected to play a vital role in expediting product sales across various regions. Moreover, they are focusing on R&D activities to achieve product differentiation and gain a competitive edge.