The global non-opioid pain treatment market size was valued at USD 38.64 billion in 2021 and is expected to expand at a compound annual growth rate (CAGR) of 8.3% from 2022 to 2030. The growth of the industry can be attributed to the increasing R&D investments by the key players for developing novel non-opioid analgesic drugs and government & private organizations for introducing favorable initiatives and creating awareness about available treatments. During the initial phase of the COVID-19 pandemic, the market for NSAIDs was moderately impacted due to the low hospitalization rate and declining sales of non-opioid analgesics for treatment.  Nationwide lockdown imposed by governments to control the spread of infection restricted people’s access to pharmacy and hospital services such as surgeries leading to low demand for NSAID products. According to the National Library of Medicine, approximately a 91% reduction was seen in the number of elective surgeries performed in hospitals. However, the sale of acetaminophen drugs such as Tylenol had increased due to the scarcity of ibuprofen during the pandemic. 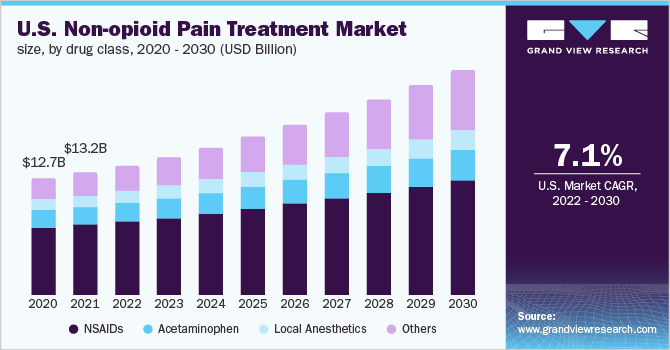 Increasing limitations on the use of opioid analgesic products for pain treatment create significant opportunities for the non-opioid analgesic drugs market. Opioid addiction and misuse of prescription drugs like oxycodone and fentanyl is a serious global issue that adversely impacts public health and economic & social wellbeing. According to the CDC, around 93,665 deaths were estimated from opioid-related overdoses in 2021 in the U.S.

In addition, according to Medicare report data, opioid prescriptions from oncologists declined by 21% and 23% from other doctors in the last decade due to serious adverse effects associated with it coupled with strict government regulations. Likewise, according to the National Cancer Institute, the same trend had been observed among last-stage cancer patients in 2021. This trend is projected to remain throughout the forecast period, which has created a huge growth opportunity for the industry.

However, side effects associated with the treatment may impede market growth during the forecast period. Geriatric people commonly use NSAIDs for pain management. There are several studies showed that long-term use of NSAIDs increases the risk of heart failure, myocardial infarction, stroke, and peptic ulcers, thereby, restraining market growth.

The nonsteroidal anti-inflammatory drugs (NSAIDs) segment dominated the industry and accounted for a revenue share of 57.2% in 2021. The segment is anticipated to maintain its dominance during the forecast period owing to the wide availability of effective NSAID medications with low costs and safer alternatives to opioids for treatment. Some of the NSAIDs that are globally used include Cambia, Cataflam, Dyloject, Zipsor, Zorvolex, Advil, Motrin, and Aleve, among others.

In addition, advancement in drug formulation and increased penetration of new products in the market contributes to the continued dominance over the forecast period. For instance, in March 2020, the U.S. Food and Drug Administration (FDA) approved Advil Dual Action for the treatment of patients with dental pain. This drug was a combination of acetaminophen and ibuprofen to be available over the counter (OTC) for dental patients in the U.S.

The others segment is anticipated to witness the fastest growth during the forecast period owing to the wide availability of anticonvulsants and antimigraine drugs coupled with the presence of potential pipeline candidates to address the unmet needs for non-opioids-based therapies. For instance, Grünenthal is currently engaged in the development of late staged pipeline products such as RTX (resiniferatoxin), MPC-06-ID, and Qutenza (label expansion) for the treatment of pain associated with osteoarthritis of the knee, chronic low back pain, and post-surgical neuropathic pain respectively.

The chronic pain segment dominated with a revenue share of 37.5% in 2021 owing to the increasing prevalence of chronic pain such as neuropathic pain and pain associated with inflammatory conditions such as osteoarthritis, rheumatoid arthritis, ankylosing spondylitis, and others coupled with increased demand for non-opioid analgesic drugs. According to the National Library of Medicine, approximately 7% of the world’s population suffers from neuropathic pain. Thus, the increasing prevalence of diseases is anticipated to increase the prescription rate for NSAID medicines.

The others segment is estimated to witness lucrative growth during the forecast period. The growth of the segment can be attributed due to increasing unintentional or accidental injuries and acute pain. According to the CDC, around 24.8 million visited physician’s offices due to accidental injuries. Hence, increasing accidental injuries subsequently increases demand for pain relief products such as non-opioid analgesics for their pain treatment, thereby, driving the market growth.

The injectable segment is estimated to exhibit the fastest growth rate of 9.1% over the forecast period, owing to the factors such as technological advancements in drug delivery and the commercialization of novel IV products, and the increasing usage of local anesthetic products for surgical procedures. For instance, in February 2021, the U.S. FDA approved the first and only acetaminophen injection developed by B Braun Medical for the treatment of pain conditions caused by various diseases. 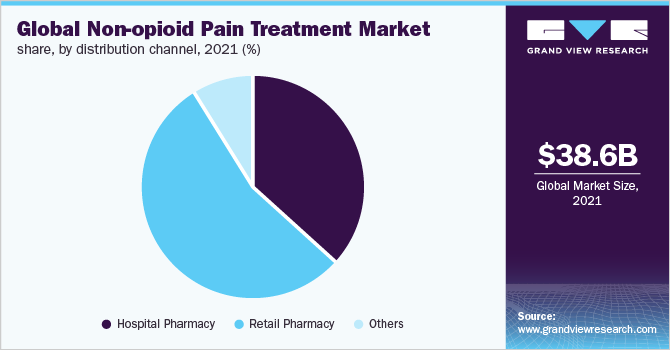 The hospital pharmacy segment is the second largest revenue-generating segment in 2021. This can be attributed due to the widespread use of non-opioid analgesics for the treatment of hospitalized patients. In addition, the rise in the number of hospitals that perform various ambulatory surgeries for the treatment of various diseases would escalate the growth of the segment during the forecast period.

North America dominated the non-opioid pain treatment industry and accounted for a revenue share of 38.50% in 2021. This dominance can be attributed to the high demand for NSAIDs, proactive government measures for limiting opioid use, improvements in healthcare infrastructure, and the presence of major players. Favorable government initiatives and reimbursement policies are likely to drive market growth. 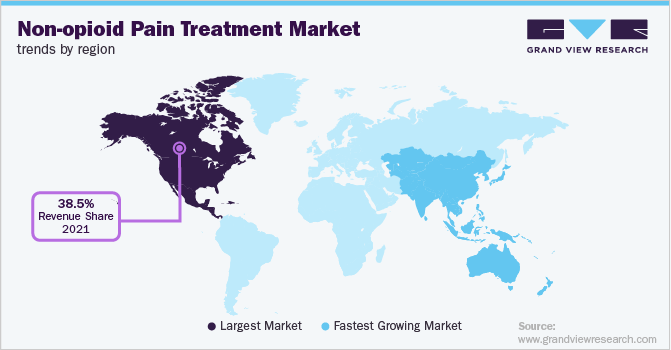 Asia Pacific region is estimated to witness the fastest growth rate during the forecast period. The high growth rate can be attributed to initiatives undertaken by key players to develop and commercialize non-opioid analgesics in the region. In July 2022, NeuroFront Therapeutics and Novaremed AG announced an exclusive licensing and collaboration agreement for the commercialization of NRD.E1 to treat patients with neuropathic pain in Singapore and Greater China.

Major players are adopting various strategies, such as geographical expansion to gain a higher share of the industry. In addition, companies are focusing on gaining market approvals for generic NSAID products for the treatment of pain and inflammation. For instance, in June 2022, the U.S. FDA granted competitive generic therapy (CGT) exclusivity of 180 days for ibuprofen suspension ANDA submitted by Stride Pharma. This ibuprofen suspension is used for pain relief from various conditions such as dental pain, muscle aches, arthritis, and headache, among others. Some of the prominent players in the global non-opioid pain treatment market include:

This report forecasts revenue growth and provides an analysis of the latest industry trends in each of the sub-segments from 2018 to 2030. For this study, Grand View Research has segmented the global non-opioid pain treatment market based on drug class, pain type, route of administration, distribution channel, and region: 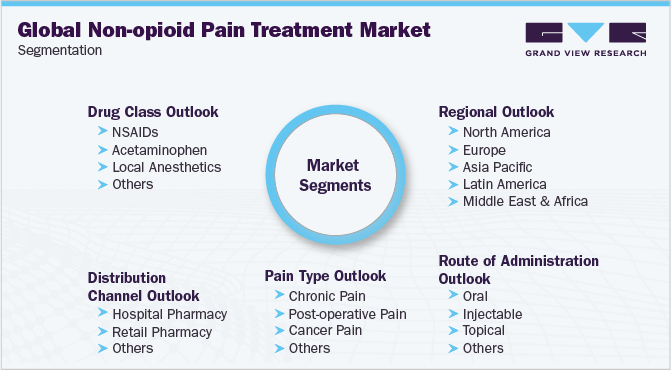 How big is the non-opioid pain treatment market?

What is the non-opioid pain treatment market growth?

b. Based on drug class, the NSAIDs segment accounted for a share of 57.20% in 2021 due to high prescription and usage rate of NSAIDs due to long-term effects and immediate results.

Who are the key players in the non-opioid pain treatment market?

What are the factors driving the non-opioid pain treatment market?

b. The major factors driving the market growth are the increasing prevalence of chronic & inflammatory diseases, increasing product approval and launches, and supportive regulatory and reimbursement policies.