The global non-PVC IV bags market size was estimated at USD 1.11 billion in 2016. Growing demand for preventive measures against errors, such as the delivery of the inappropriate dose, and increasing demand for innovative IV containers are some of the principal market drivers. The problems associated with traditionally-used IV containers include the interaction of drugs & packing materials and difficulty in transport, handling, & disposal of containers. The majority of these problems can be minimized by adopting non-PVC IV bags. Thus, the demand for the same is expected to rise significantly during the forecast period.

The demand for non-PVC IV bags is high in oncology treatment including chemotherapy and targeted drug delivery. Many agents used under these therapies are susceptible to interaction with the plasticizers and tend to convert into harmful agents. This incompatibility can be minimized by the use of containers without plasticizers.

Such containers are usually made of alternative materials such as polypropylene and ethylene-vinyl acetate (EVA). The development of novel materials as well as the availability of these bags in different designs are the factors expected to boost growth by replacing glass and PVC containers.

The other factors supporting the market growth include the growing reach of the local manufacturers in the international market, strict regulations against usage and disposal of PVC, and healthcare infrastructure development in developing countries. The rising number of hospitals and advancements in the quality of services provided in them are the factors that can be directly attributable to the market growth.

Extensive research and development are being undertaken to find & develop alternatives to PVC. Among the approved materials, majorly used PVC alternatives include ethylene vinyl acetate, polypropylene, and copolyester ether. The ongoing studies include toxicology profiling of the currently available plasticizers and the development of safer alternatives.

Among the currently used PVC alternatives, EVA captured the largest share in 2016. The usage of EVA is expected to remain high in blood banks and the storage of frozen mixtures. Increasing awareness and high demand for blood & blood component storage due to the rising number of blood banks are the factors contributing to the largest segment share during the forecast period.

The copolyester ether segment is expected to showcase the fastest growth during the forecast period. The advantages associated with copolyester ether include durability, clarity, chemical resistance, and its ability to withstand several sterilization processes including autoclave, radiation, electron beam, and others.

The strength of copolyester ether is enhanced by adding other materials such as polypropylene and other polyolefin resins. The development of Ecdel elastomer has proved to be a milestone in the development of copolyester ether in manufacturing pharmaceutical packaging. Some of the companies engaged in developing these combinations are Abbott Laboratories, Sealed Air Corporation., B. Braun Melsungen AG, and Eastman Chemical Company.

Based on the content type, the non-PVC IV bags market is segmented into the frozen mixture and liquid mixture. The liquid mixture segment captured the largest share in 2015. The introduction of innovative designs and high usage in hospitals for IV drips are some of the factors contributing to the large segment share.

The demand for specialized IV containers that have the ability to withstand low temperatures and provide higher safety than PVC is increasing in the blood banks vertical. Other examples of frozen mixtures include methylprednisolone, cefazolin, ceftriaxone, nafcillin, and nicardipine hydrochloride.

The market share currently acquired by non-PVC IV bags used for frozen mixture is very low as compared to the liquid mixture segment. PVC bags tend to burst under low temperatures. However, EVA has proved to be a better alternative to PVC, which can withstand lower temperatures.

The single-chamber segment captured the largest share in 2016. The usage of single-chamber IV bags is currently high and is expected to remain high in the future as IV bags are replacing other IV containers. The introduction of non-PVC materials has catalyzed the replacement of glass containers by plastic bags owing to advantages such as convenience in handling, transport, and disposal.

Single chamber bags are used for nearly all IV solutions including isotonic and hypotonic solutions, which contribute to the largest share of the segment. The usage of these solutions is directly proportional to the number of hospital admissions in the respective regions. In addition, the growing number of point-of-care facilities and home care settings is also expected to have a significant positive impact on segment growth. 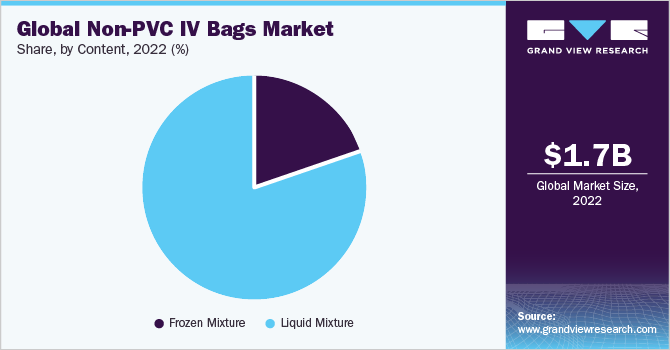 Increasing utility of multichambered containers in various applications such as drug reconstitution & parenteral nutrition and the availability of customized product offerings are the principal factors driving the growth of the segment. The multichambered segment is expected to exhibit the fastest growth during the forecast period.

The usage of multichambered containers is expanding in the fields of parenteral nutrition and chemotherapy. These containers are generally made according to the specifications of the pharmaceutical companies. The rising number of local players in China and India are expected to boost demand due to the availability of these products at competitive prices.

North America captured the largest share in 2016. Strict norms for increasing patient safety in the U.S. has boosted demand for non-PVC IV containers since they offer patient care without causing harm. The dominance of this region is expected to continue over the forecast period.

In Europe, strict norms for disposal of PVC materials to reduce pollution has given rise to the demand for alternatives to PVC. The adoption rate of novel medical devices is significant in the region. As a result, the European market followed North America in terms of revenue generation.

The presence of fast-developing economies and increasing awareness of alternatives of PVC are some of the principal factors expected to fuel growth in the Asia Pacific region. The spearheads in the region include Japan, India, and China. In addition, the ASEAN countries are expected to exhibit significant growth due to the development of healthcare infrastructure; especially to cater to the rising healthcare tourism in the region.

The Asia Pacific region is expected to exhibit the highest CAGR during the forecast period. The factors having a high impact on the growth include the emergence of local manufacturers who attract international demand by offering products at competitive prices, increased foreign direct investment, and rapid development in healthcare infrastructure including an increase in the number of hospitals, clinics, & blood banks.

The global non-PVC IV bags industry is becoming an oligopoly due to the emergence of a large number of local manufacturers in both developing as well as developed markets. Major companies that use non-PVC packaging for their products include B. Braun Melsungen AG, Baxter, and Pfizer, Inc. (Hospira).

This report forecasts revenue growth at global, regional, & country levels and provides an analysis of the industry trends in each of the sub-segments from 2014 to 2025. For the purpose of this study, Grand View Research has segmented the global non-PVC IV bags market on the basis of type, material, content type, and region:

Increasing hospital admissions in Western countries has led to a surge in demand for IV fluids for patient treatment and drug administration. Manufacturers of prefilled IV bags are expected to stock up on empty IV bags sourced from Asian countries, most of which are PVC bags, at a lower cost. However, some critical drugs such as Isosorbide Dinitrate used to relieve chest pain symptoms in patients, are incompatible with PVC IV bags. Drugs that react to PVC are therefore required to be bagged in non-PCV materials that allow for safe packaging and consumption. As the demand for drugs used in the treatment of SARS-COV rises, the demand for non-PVC bags is expected to closely follow from IV and drug manufacturers. We are working to account for this surge in our estimates. The report will account for Covid-19 as a key market contributor.