The global non invasive prenatal testing market size was valued at USD 2.83 billion in 2020 and is expected to grow at a compound annual growth rate (CAGR) of 10.9% from 2021 to 2028. The increasing incidence of chromosomal abnormalities coupled with growing product usage in new applications is driving the organic revenue growth in the market. Furthermore, advancements in the existing tests in terms of advanced functions, improved chemistry, and bioinformatics analysis are anticipated to spur market growth. Improving reimbursement policies for average and low-risk pregnancies is also one of the key driving factors of the market. In December 2020, Natera announced expanded coverage from the largest U.S. Health Plan, Aetna, for its non-invasive prenatal testing (NIPT) to all pregnancies. 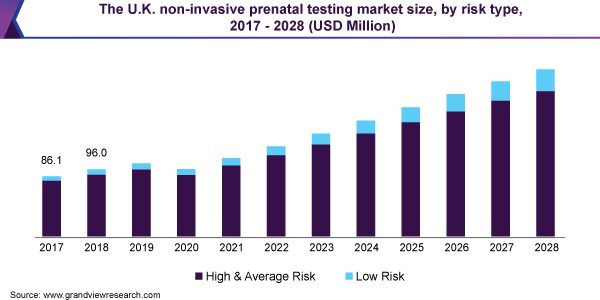 This coverage was the result of the guidelines on aneuploidy screening options published by the American College of Obstetricians and Gynecologists (ACOG) in partnership with the Society for Maternal-Fetal Medicine (SMFM). Expansion of the technology for the detection of monogenic diseases further propels the revenue in the market. In April 2019, Progenity, Inc. launched Resura prenatal test for monogenic disease using sequencing-based non-invasive cell-free DNA technology to boost its portfolio compared to other competitive tests in the market.

Sequenom, Verinata Health, Natera, and Ariosa Diagnostics have acquired a major revenue share in the market, as these are early market entrants. Several commercial and academic laboratories, such as NIPD Genetics in Cyprus; BGI Health; Berry Genomics; the Chinese University of Hong Kong; Radboud University Nijmegen in the Netherlands; and LifeCodexx in Germany, are engaged in expanding their business in the cffDNA-based NIPT market for fetal aneuploidies and other genetic conditions.

This, in turn, has significantly accelerated the revenue generation in the non-invasive prenatal testing market over the past few years. The market witnessed a short-term revenue slowdown in 2020 due to the COVID-19 crisis, which led to a shift in business focus and delay in product launches. Initiatives pertaining to the management of the supply chain and access to testing services for patients are playing a critical role in minimizing the impact of the current global emergency.

The market for non-invasive prenatal testing for high- and average-risk pregnancies held the largest share of over 90% in 2020 due to the high adoption of these tests in high-risk cases in patients aged 35 years and above. The presence of favorable payer reimbursement in this segment coupled with rising awareness about the prevention of chromosomal anomalies, such as Down syndrome, has also contributed to the large share of this segment.

On the other hand, the low-risk pregnancy testing market is anticipated to witness the fastest CAGR over the forecast period. Support from the government, such as budget assignment for average-risk pregnancies, is expected to be a favorable factor for the market growth. For instance, according to the NCBI in 2019, testing in average-risk pregnancies allowed detection of a higher number of affected cases, resulting in an additional budget of USD 35 million for this group in Ontario.

The 13 to 24 weeks gestation period segment accounted for the highest revenue share of over 45% in 2020. This can be attributed to the fact that maximum non-invasive prenatal diagnosis is carried out in the second trimester of the pregnancy, and these tests also cover major complementary tests, such as ultrasound and serum screening for alpha-fetoprotein.

Several companies focus on the analysis of cffDNA in a sample of maternal blood collected in the first trimester to develop a more accurate and reliable NIPT. As a significantly fewer number of tests is carried out in a period of 25-36 weeks, the segment did not account for much revenue share. However, as fetal DNA can be detected from the 4th week of gestation, it can only be considered reliable post 7 weeks.

Moreover, fetal DNA concentration goes on increasing in the maternal blood during the gestation period, reaching 80 fetal genomes per mil blood in the third trimester from just 16 in the first trimester, which makes tests conducted in this trimester also highly reliable. However other non-invasive tests are prominent in this period, such as ultrasound and nonstress tests, for monitoring normal growth & response of the fetus.

The cell-free DNA-based NIPT market is estimated to generate the highest revenue share of 43.6% in 2020. Cell-free DNA is increasingly being employed in predicting the risk of genetic conditions in prenatal care through different genetic analyses. Several research studies are being carried out to further advance the use of tests offered through this segment.

For instance, a research study by Togneri et al. published in December 2019 implemented and validated cell-free DNA-based NIPT in the National Health Service (NHS) regional genetics laboratory. The researchers concluded that cfDNA-based NIPT can be conducted as a private test in patients with low risk of common trisomy or with other indications.

Ultrasound detection is deployed as complementary to the Cell-free DNA-based NIPT test, resulting in the lower share of this segment in the current market. However, the test provides a basis for further testing of the fetus for the identification of abnormalities. The recent advancements in technology and 3D-4D imaging have improved real-time monitoring, safety, and efficiency of the test, which is further expected to drive the growth of the segment.

The NGS technology is dominant in all aspects including efficiency, availability, penetration, and technology. This has resulted in the wide application of NGS in this space. For instance, Illumina offers whole-genome sequencing-based methods for NIPT. Ariosa Diagnostics, Inc.; Verinata Health, Inc.; Natera; Sequenom, Inc.; Berry Genomics Co.; BGI; GENNET; and LifeCodexx AG are other key companies that offer NGS-based NIPT testing for common chromosomal conditions, including trisomy 13 (Patau syndrome), 18 (Edwards’ syndrome), and trisomy 21 (Down syndrome).

Consumables & reagents accounted for the largest revenue share of over 76% in 2020 owing to the high adoption of NGS-based prenatal test that requires various reagents and assays to run sequencing process. Also, the presence of a substantial number of suppliers that offer solutions to isolate cell-free DNA is driving the segment growth.

On the other hand, the instruments segment is expected to register the fastest CAGR from 2021 to 2028 owing to continuous efforts undertaken by instrument manufacturers to develop advanced platforms. PerkinElmer, Inc. offers Vanadis NIPT System—an automated instrument to overcome the limitations associated with NIPT test cost, complexity, and capacity of other NIPT technologies for screening of aneuploidy.

The system is the only NIPT screening platform that enables analysis of the targeted cfDNA without PCR or next-generation sequencing. This is done by direct capture and labeling of targeted DNA fragments. The Ariosa cfDNA System offered by Roche and VeriSeq NIPT Microlab STAR system offered by Illumina are some of the key instruments available commercially for NIPT and are driving the segment revenue through their improved efficiency.

Diagnostic laboratories dominated the market with a revenue share of 59% in 2020. The key developers, such as Illumina, are outsourcing their sample processing to Illumina CLIA labs when in-house facilities are not sufficient. Also, the laboratories that are engaged in conducting NIPT tests across the U.S. are operating in compliance with quality-assurance regulations to safeguard the test quality and reproducibility.

Well-drafted laboratory standards for NIPT in developed regions coupled with a high volume of NIPT tests conducted in diagnostic laboratories have also contributed to the largest revenue share of this segment. In addition, some facilities also outsource testing services to diagnostic laboratories, thereby driving the segment growth. 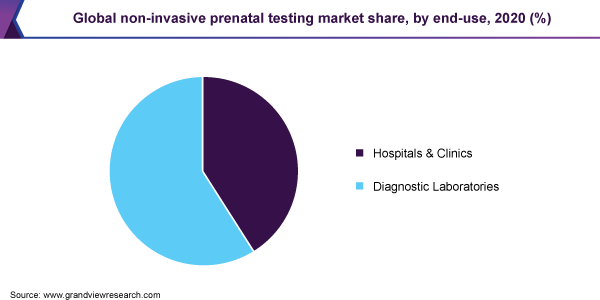 North America captured the maximum revenue share of over 45.9% in 2020 followed by Europe. The U.S. lacks national consensus policies on the implementation of NIPT; however, it is being widely adopted across the country, resulting in the dominance of North America. Furthermore, the recent addition of NIPT in coverage plans of major insurance companies is anticipated to boost the market growth in the U.S. In June 2019, Illumina won an infringement suit against Roche’s Ariosa Diagnostics (Roche) pertaining to NIPT.

A judgment was issued by the U.K. High Court of Justice, Chancery Division, Patents Court stating that Harmony cell-free, DNA-based NIPT developed by Ariosa infringes the European patent issued by Illumina, assuring the validity of patent claims. Such activities are propelling revenue growth in the region. Asia Pacific is anticipated to be the fastest-growing regional market during the forecast period. The presence of companies, such as BGI in China, which is a prominent entity in the NIPT market, is expected to boost the market growth.

Companies engaged in the development of NIPT solutions are operating in a highly competitive business landscape. Major players are expanding their test portfolio to distinguish themselves and solidify their market share. Companies are also focusing on launching products and continuous innovations to retain and acquire a higher market share. For instance, in June 2019, Illumina announced the launch of an expanded version of its VeriSeq NIPT, which allows the detection of a broader range of chromosomal associations with birth defects.

In addition, the companies are developing products as per the global requirements along with expanding the use of current products. For instance, in April 2020, Natera announced the expansion of coverage for its product Panorama. The product will now cater to all targeted patients irrespective of their age and conditions. Some prominent players in the global non invasive prenatal testing market include:

This report forecasts revenue growth at the global, regional, and country levels and provides an analysis of the latest industry trends in each of the sub-segments from 2017 to 2028. For the purpose of this study, Grand View Research has segmented the global non invasive prenatal testing market report on the basis of the gestation period, risk type, method, technology, product, end-use, and region:

How big is the non-invasive prenatal testing market?

What is the non-invasive prenatal testing market growth?

b. NIPT for high & average risk type dominated the non-invasive prenatal testing market with a share of 91% in 2020. This is attributable to the presence of the favorable payor reimbursement coupled with increasing awareness on the prevention of chromosomal anomalies such as Downs Syndrome.

Who are the key players in the non-invasive prenatal testing market?

What are the factors driving the non-invasive prenatal testing market?

b. Key factors that are driving the NIPT market growth include increasing demand for early and non-invasive prenatal testing procedures to prevent the occurrence of chronic illness in the offspring and improving reimbursement scenarios in the space.