The North America linear low-density polyethylene market size was valued at USD 14.5 billion in 2019. The market is primarily driven by ascending demand for the product from various end-use industries including building and construction, electrical and electronics, and automotive. The food and beverage packaging end-use segment accounted for more than a 40% share of the overall market in 2019. 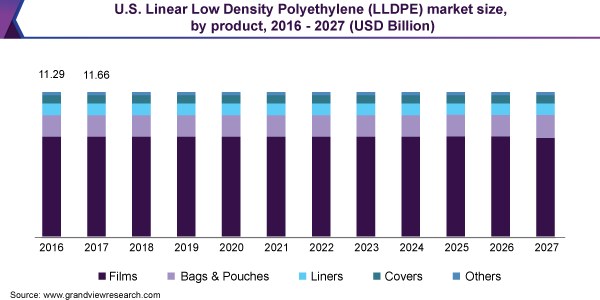 North America is one of the prominent suppliers of polyethylene owing to the abundant availability of raw materials to manufacture ethylene and other derivatives. Linear Low-Density Polyethylene (LLDPE) is significantly consumed in applications such as liners, covers, packaging films, and other products. Consumption in these applications is anticipated to witness a significant rise owing to the properties of LLDPE, such as strength, durability, easy to handle, and inexpensive.

Ethylene and crude oil are among the key raw materials used to manufacture plastics. Ethylene and co-monomers such as butane, hexane, and octene are the main raw materials utilized in the production of LLDPE. Fluctuating raw material costs associated with plastics is expected to pose hindrances in terms of profitability. Major companies, such as BASF and Exxon Mobil, are actively investing in R&D to improve their production processes by adopting strategic initiatives in an attempt to reduce costs and improve efficiency.

Ethylene prices have been witnessing high fluctuations since the past few years, while its demand was affected by downstream polyethylene outages. Ethylene has witnessed a significant demand in North America with increased consumption in automobile and packaging applications. Moreover, production cost is also relatively lower owing to high availability of low carbon feedstock in the region. Canada and Mexico are anticipated to witness an exponential rise in manufacturing activities, which is driven by economic growth, favorable credit landscape, and increased spending capacities in. Plastics and the related raw materials, which are consumed in the manufacturing of tangible goods, are likely to gain traction in terms of demand in the coming years, thereby positively affecting plastics industry, including the LLDPE industry.

Films were the prominent product segment and accounted for more than 65% of the overall market share in terms of revenue in 2019. There is a growing demand for plastics films and sheets in roof flooring applications in the U.S. The product helps limit leakage and prevents the buildings from extremely low and high temperatures. It gives a smooth texture to the ceiling and requires cement and paint in lesser quantities for beautification. An enormous increase in the utilization of LLDPE films and growth in spending of packaged foods have been observed in various cities such as New York, Washington, and Seattle.

In terms of volume, packaging emerged as the prominent end-use segment and accounted for 67.8% of the North America Linear Low-Density Polyethylene (LLDPE) market in 2019. Rising demand from food and beverage industry is expected to remain a key driving factor pushing the growth of packaging segment. LLDPE, in the form of sachets, transparent films, adhesive tapes, and others, is widely utilized in food and beverage packaging, thereby driving the demand over the forecast period. 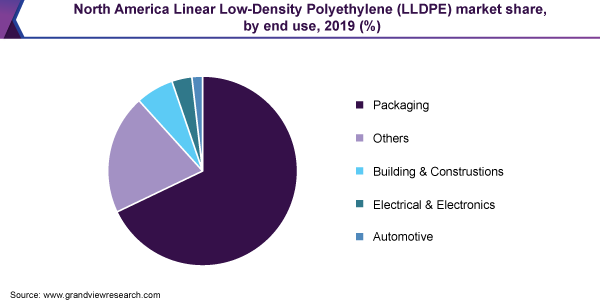 Automotive is expected to emerge as the fastest-growing end-use segment over the forecast period. The growth can be attributed to the increasing use of lightweight plastic components as a replacement for aluminum and steel components in order to improve the fuel efficiency of vehicles. Linear low-density polyethylene is extensively preferred over steel and aluminum to produce various components such as dashboards and box liners owing to its superior impact strength, improved aesthetics, easy moldability, scratch resistance, recyclability, vibration and noise control, and lightweight.

In 2019, extrusion process segment has dominated the market and is anticipated to account for more than 85% revenue share by the end of 2027. Extrusion process is one of the most economical manufacturing processes utilized to produce LLDPE components in large quantities. The components produced utilizing extrusion include bags, films, piping, tubing, door rims, deck railing, weather stripping, and others. Growing demand for these products is anticipated to boost the consumption for linear low-density polyethylene using extrusion process over the forecast period.

Rotomolding is commonly utilized to produce hollow components using powder form of plastics. The components produced include crates, pellets, containers, litter bins, road cones, traffic dividers, and road signs, floats, mudguards, ducting, diesel fuel tanks, canoes, and boats. These components are used in various industries including consumer goods, building and construction, and automotive. Growth in the demand of these components in various end-use industries is expected to drive the growth of rotomolding process segment over the forecast period.

Both in terms of volume as well as value, multilayer segment is projected to dominate the market throughout the forecast period. Multi-layered LLDPE is utilized to produce transparent films and bottles through blow molding process. Linear low-density polyethylene is blended with high-density polyethylene to enhance properties such as stiffness, tensile strength, and hardness as well as to produce very thin films.

Monolayer segment accounted for small market share and is expected to witness below average CAGR over the forecast years. Monolayer linear low-density polyethylene film is produced with a single film and is utilized in the manufacturing of plastic crimps, twist ties, and reusable zippers & tape seals. Monolayer LLDPE films are used when single-layer film properties are required to protect the product from oxygen and water vapor transfer, other gaseous, and greasy substances to reduced biological degradation of the product.

Building and construction industry in Canada is witnessing lucrative growth opportunities. The low cost involved in facility setup and availability of labor at low cost in comparison with that of the U.S. are factors that are attracting the attention of manufacturers to set up their plants in Canada. In addition, the investment by the government of Canada in infrastructure development is also anticipated to boost the growth of construction industry in country, thereby, creating a high demand for linear low density polyethylene over the forecast period.

Prominent companies involved in the marketplace such as INEOS, BASF SE, and SABIC are integrated across three stages of value chain, i.e. raw materials supply, production of LLDPE, and product supply. This enables the companies to reduce raw material procurement costs and diversify their operations into various industries that are served by the raw materials, such as construction, automotive, food packaging, and pharmaceutical packaging among others.

Key manufacturers are focusing on strengthening their positions through geographical expansion, mergers and acquisitions, and strategic partnerships. For instance, in August 2018, LyondellBasell Industries Holdings B.V. completed the acquisition of A. Schulman, Inc., a supplier of high-performance plastic compounds, composites, and powders.

This report forecasts revenue and volume growth at global, regional, and country levels and provides an analysis of the latest industry trends in each of the sub-segments from 2016 to 2027. For the purpose of this study, Grand View Research has segmented the North America linear low-density polyethylene market report on the basis of product, process, end use, layer, and country:

How big is the North America linear low-density polyethylene market?

b. The North America linear low-density polyethylene market size was estimated at USD 14.5 billion in 2019 and is expected to reach USD 14.9 billion in 2020.

b. U.S. dominated the North America linear low-density polyethylene market with a share of 87.6% in 2019. This is attributable to new import tariffs, strong economy, changing tread deals, proliferation of mega projects, focus on smart cities, and increasing household formation.

Who are the key players in North America linear low-density polyethylene market?

What are the factors driving the North America linear low-density polyethylene market?

b. Key factors that are driving the market growth include ascending demand for the product from various end-use industries including building and construction, electrical and electronics, and automotive.