The global hexane market size was over USD 1.75 billion in 2015 and is expected to witness considerable growth owing to the widening application scope and increasing demand from the oil & gas extraction industry. It offers exceptional performance owing to the properties such as transparency, low water solubility and easy miscibility with chloroform, alcohol, and ether. Such characteristics are expected to drive global hexane market.

Its increasing use in rubber and petrochemical industries is anticipated to boost the global market over the next eight years. Additionally, properties such as the ability to remove unwanted taste, color preservation, and other undesirable food properties are anticipated to drive its demand in the edible oil industry. 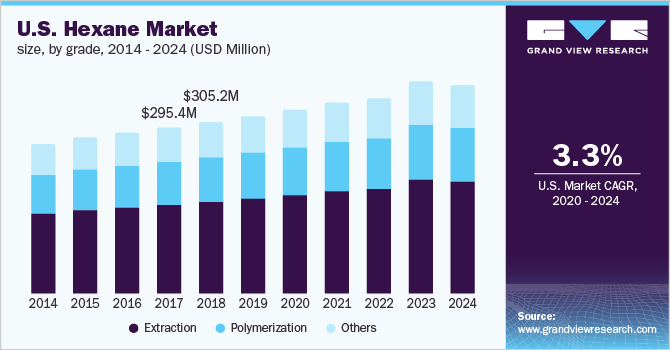 The primary use of solvents containing hexane is to extract vegetable oil from crops such as soybeans. The oil is extracted for various seed crops including cottonseed, mustard seed, rape seed, peanuts, flax, soybeans, safflower seed, and corn germ, which are then processed into food. The solvents are increasingly being used as cleaning agents in the textile, shoemaking, furniture, and printing industries

It is increasingly being used in the healthcare and pharmaceutical industry for use as a liquid in the manufacturing of tablet molds along with low-temperature thermometer and is anticipated to propel market growth. Furniture industry application includes its use as veneers which are manufactured from adhesives, lacquers, and cleaners.

Global crude oil price dynamics is dependent on diverse factors, which primarily include the supply & demand balance, macroeconomic & geopolitical situations across the globe, currency exchange rates, and the existing condition of financial markets.

"Extraction grade was the largest segment in 2015"

Extraction grade dominated the global industry and accounted for over half of the global revenue in 2015. The industry is growing at a significant pace owing to high standard development required by the food and extraction industries.

Polymerization grade has been gaining traction in the industry owing to its purity, accurate composition, longer shelf life and quality as per the international standards. The grade is primarily used in various end-use industries such as waste water treatment chemicals, soaps & detergents, tea-leaf processing, pre-metal treatment chemicals and various other industries.

"Edible oil extractant was the largest application segment in 2015"

Edible oil extractant was the dominant application segment accounting for over 35% of the global volume in 2015. Hexane is increasingly being used in the edible oil industry as an oil extractant for seed crops. Growth in this segment can be attributed to the rising awareness among consumers regarding the use of refined oil and the health impact associated with the same.

Industrial solvent is a key application segment and is expected to grow at a CAGR of 3.0% from 2016 to 2024. Properties such as easy miscibility with ether, alcohol, and chloroform; low water solubility and colorless nature make hexane a widely used solvent in industries such as textile, footwear, furniture and printing.

Use of solvents have significantly changed modern living and are an invaluable solution for industries ranging from applications such as manufacturing printing ink, paints and coatings, adhesives, pharmaceuticals and cosmetics, to applications in cleaning and printing products.

Asia Pacific was the largest and the fastest hexane market. Increasing demand from extraction application is expected to foster the market growth over the forecast period. Rapid industrialization coupled with expanding healthcare facilities is expected to fuel the regional industry.

The European economy is overcoming the recent economic slowdown, which had started to positively impact production. However, Brexit is expected to slow down economic growth in the short run, further impacting industry dynamics in the region.

The North American market is witnessing moderate growth on account of dwindling industrial production and high penetration leading to a relatively mature economy. Manufacturers are shifting their production facilities in Asia Pacific owing to the availability of land and skilled labor at a comparatively lower cost.

"The industry is consolidated in nature"