The North America polyurea market size was valued at USD 344.3 Million in 2018 and is projected to register a 5.0% CAGR over the forecast period. Increasing importance of spray coatings in various end-use industries is expected to promote the growth. Rising usage of lining systems for environmental protection in practices, such as landfill control, on account of stringent regulations aimed at mitigating the adverse effects of pollution is expected to fuel the demand for polyurea.

A rise in construction of residential, non-residential, and commercials structures in U.S., on account of improvement in household and manufacturing sectors, is anticipated to fuel the demand for flooring solutions, waterproofing membranes, and lining materials. This favorable trend is expected to bode well for the market growth. 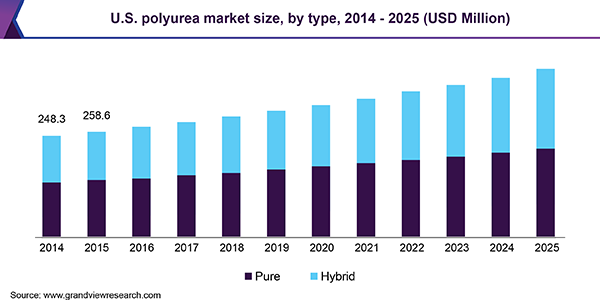 Polyurea is more advantageous than its substitutes such as polyurethane and epoxy. It is highly resistant to abrasion, crack, and water and has high cure speed, which makes it suitable for a variety of application. Furthermore, it can withstand several chemicals and helps prevent microbial growth in wall cavities.

Pure polyurea coatings are widely adopted in mining, sanitation systems, wastewater, marine, and secondary containment applications. VersaFlex VF 320, by VersaFlex Incorporated and Vortex Pure Polyurea, by Vortex are some of the prominent products available in the marketplace.

Hybrid polyurea is derived from the reaction between a polyisocyanate component and a resin blend. The resin blend in hybrid polyurea is made up of blends of amine-terminated or hydroxyl-terminated polymer resins. Hybrid polyurea is the mixture of polyurea and polyurethane. It can be used in a range of applications, such as food processing plants, cold storage facilities, mining, wildlife enclosures, parking structures, and amusement park among others. Some of the examples of hybrid polyurea available include Quick-Shield 941 (polyurea hybrid elastomer) by SWD Urethane, Rhino Hybrid by Rhino Linings Corporation, and Standard Hybrid Polyurea by Armorsil Waterproofing & Construction Chemicals.

In terms of volume, aromatic emerged as the largest product segment and accounted for 66.40% of the North America polyurea market in 2018. Aromatic based products are more tenacious compared to the aliphatic. Aromatic molecules are stable and do not break apart or react with other substances. Therefore, they can provide desired mechanical properties and easy processability. Hence, they are extensively used in commercial as well as industrial application with high possibility of exposure to reactive chemicals. Aromatic compound-based systems are coated with the topcoats of aliphatic compound-based coatings to get the desired color stability on the coated surface when exposed to UV light.

Coatings held the maximum market share in 2018 and is expected to maintain its dominance throughout the forecast period. Polyurea coatings exhibit elasticity, toughness, and high surface hardness, which results in excellent abrasion resistance. These coatings are mainly employed in applications that require fast curing. Polyurea utilized for pier protection needs to be fully cured as high-volume storage of coated pipes is difficult as well as due to the weight, coating needs to be fully cured before it is transported.

Properties of polyurea including high humidity tolerance from substrate, temperature and environment make it a very opposite coatings for use in construction application such as car park decks, roof repair membranes, containment liners, and offshore. Furthermore, it is employed in freight ship liners for conveyor belts, trucks, and bulk transport wagons owing to its high abrasion resistance.

Construction segment accounted for more than 40% of the overall market share in 2018 and is expected to expand at above average CAGR over the forecast period. Polyurea finds application as sealants and coatings in residential structures, commercial buildings, and infrastructure projects. It also finds application as containment solution and landfill covers in infrastructure projects. Factors such as moisture insensitivity and high reactivity associated with the product are anticipated to promote its usage in secondary containment, tunnel coatings, manhole, and tank liners. 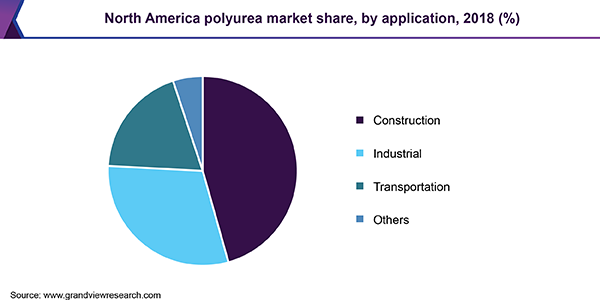 Transportation segment is expected to register a moderate CAGR over the forecast period. Polyurea lining and coating products are utilized in buses, fire and ambulance vehicles, boats, freighters, helicopters, ships, trains, and transport trucks on account of their properties such as blast resistance, corrosion control, ballistic mitigation, and non-skid surface. Adhesives are increasingly being used to substitute metal fasteners in automobiles to reduce overall car weight by around 15% as well as to reduce carbon emissions.

U.S. accounted for more than 80% of the overall market share in 2018 followed by Canada and Mexico. The country is anticipated to continue following the same trend over the forecast period.

Canada is expected to witness the fastest CAGR during the forecast period supported by various governmental initiatives. For instance, the government of Canada has announced the New Building Canada Plan for ten years, which is aimed at the funding of USD 33 billion to promote investments in domestic infrastructure. The plan also amended with an investment of USD 75 billion for public infrastructure and USD 53 billion for building provincial, territorial, and municipal infrastructure in Canada.

The Mexico market for polyurea is largely driven by the growth of end-use industries, such as transportation and building and construction. Presence of strict regulation regarding the usage of polyurethane is expected to have a positive impact on the growth. Development of construction industry in the country is contributing to the ascending demand for polyurea. Moreover, R&D efforts to develop new application areas are also expected to positively influence the regional growth.

The market is fragmented in nature with the presence of various key players. The players face intense competition from each other and regional players who have strong distribution networks and good knowledge about regulations and suppliers. Some of the prominent product manufacturers include BASF SE; Huntsman International LLC; VersaFlex Incorporated; Nukote Coating Systems; SWD Urethane; PPG Industries, Inc.; LINE-X Protective Coatings; and others.

Prominent players involved in the market, such as Covestro AG and BASE SE are investing in R&D activities to enhance their product offerings and market share, which gives also them a competitive edge. For instance, in March 2018, Huntsman International LLC acquired a North America based company Demilec, Inc., which manufactures and distributes polyurea sprays under the brand name Maxguard.

This report forecasts revenue and volume growth at regional and country levels and provides an analysis of the latest industry trends in each of the sub-segments from 2014 to 2025. For the purpose of this study, Grand View Research has segmented the North America polyurea market report on the basis of type, raw material, product, application and country: