Incorporation of improved technology, adoption of minimally invasive procedures, and the rising awareness of bariatric surgeries are expected to drive the obesity treatment market

The global obesity treatment market was valued at USD 3.9 billion in 2015. According to the Institute of Health Metrics and Evaluation, 2.1 billion people (nearly 30.0% of the world’s population) are either obese or overweight.

Obesity poses an enormous challenge for the developed countries and the lower and middle-income economies. As per the World Health Organization fact file, overweight and obesity are associated with various diseases and contribute to a higher mortality rate as compared to malnourishment. The overweight and obese population report a high prevalence of chronic diseases including hypertension, diabetes, and orthopedic diseases. 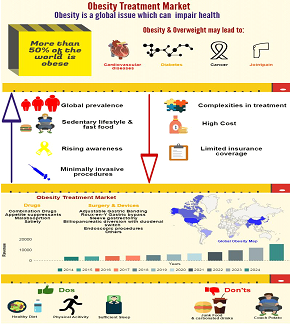 In addition, the shifting preference toward sedentary lifestyles, physical inactivity, and changing food habits leads to weight gain in adolescents. The increase in one-person households, nuclear families, and families with working parents are engendering the adoption of unhealthy lifestyles, which is propelling the demand for accessible and inexpensive fast-food meals. The increasingly busy schedules and the growing stress are causing people to consume ready-to-eat food. Also, the food consumption tendencies amongst the young lean toward overeating and low nutrient intake, which is leading to untoward health effects. The increasing number of obese adolescents and overweight individuals over 18 years of age is rising due to physical inactivity, incessant playing of video games, and long hours of television viewing.

The adjustable gastric banding segment accounted for 27.1% of the global market share in 2015. The endoscopic minimally invasive procedure segment, using malabsorption and artificial fullness devices, is expected to lead the vertical over the forecast period due to the decreasing incidences of post-operative infections that stem from invasive & non-invasive procedures. Thus, shortening the hospital stays for patients and saving on time & cost.

Gastric emptying devices are employed to impede food absorption, which controls the rate of stomach emptying as a result of the reduced absorption pace. This further leads to a feeling of stomach fullness, thereby resulting in the suppression of appetite.

North America dominated the global sector with a revenue share of around 52% in 2015. The dominance of the region was majorly attributed to the growing overweight and obese population and increasing incidences of hypertension and diabetes. In addition, the paradigm shift toward minimally invasive procedures is anticipated to support the emergence of the North American obesity treatment market.

The Asia Pacific region is expected to account for the fastest growth during the forecast period. Factors responsible for the significant growth of the vertical in the developing economies include the growing patient awareness levels related to commercial availability of drugs, devices, and implants for weight management and invasive bariatric surgeries. Additionally, the constantly improving healthcare infrastructure coupled with the increasing healthcare spending is anticipated to drive the demand for obesity treatment devices in the regional sector.

The players are moving toward product innovation through extensive investments in R&D and the introduction of new combination drugs & satiety products. Also, along with the heightened efforts toward developing minimally invasive procedures, players are adopting geographic expansion strategies to increase their market share.

For instance, in September 2014, USGI Medical, Inc. initiated the ESSENTIAL clinical trial. The study was carried out to compare the weight loss results obtained from performing endoscopic procedures and sham procedures.