The global oculoplastic surgery market size was valued at USD 7.1 billion in 2018 and is expected to expand at a CAGR of 5.72% during the forecast period. The consumer awareness and rise in geriatric population prone to signs of aging are the key factors driving the growth. Availability of safer and less more affordable procedures owing to rapid technological advancements is also fueling the market. Furthermore, a growing urban population, availability of multiple surgical procedures, and an increasing number of plastic surgeons across the globe is also expected to propel market growth. 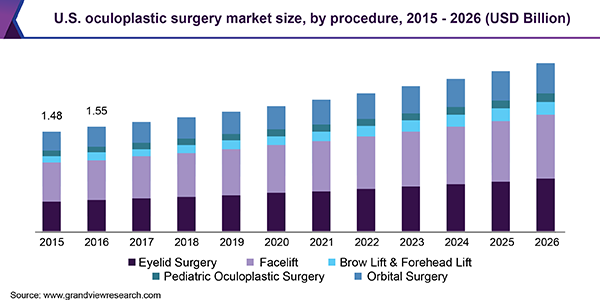 Increasing prevalence of eye-related disorders, such as blurry vision, wrinkles near the eyes, and droopy eyes is expected to aid the market growth. According to the American Society of Aesthetic Plastic Surgery, over 1.3 million eyelid procedures were performed in 2017, globally. The report also highlights that in the same year, approximately 17 million plastic surgery procedures were performed in U.S alone. Increasing medical tourism and improved reimbursement policies in both developed and developing economies are anticipated to positively influence the growth of the oculoplastic surgery market in the foreseeable future.

Rising disposable income, growing acceptance of various oculoplastic surgeries, and willingness to spend on aesthetic surgeries are the other factors driving the market growth. Social media and celebrities have proven to be a strong influence for consumers in the medical aesthetics industry. For instance, according to multiple studies conducted in U.K., approximately 55% of facial plastic surgeons said patients in their practice reported that they were motivated by a desire to look better in selfies in 2017, up from 13% in 2016. Furthermore, there is an increasing demand for medical aesthetic procedures provided by beauty salons with constant plea to upgrade to more reliable and effective aesthetic equipment in U.K. However, the advent of minimally invasive surgical procedures, may restrict the presence for oculoplastic surgeries during the forecast period.

The eyelid surgery segment accounted for the largest market size in 2018. Eyelid surgery also known as an eye lift or blepharoplasty removes excess skin from the upper eyelids and reduces bagginess from the lower eyelid. Rising geriatric population prone to various vision impairment problems and issues such as sagging upper eyelids is anticipated to drive the growth of the segment in the forthcoming years.

The browlift and facelift segment was valued at USD 557.40 million in 2018 and is expected to register the fastest CAGR of 6.23% during the forecast period. The high growth rate of the segment is primarily attributed to the benefits associated with the surgery, such as reduction of eye bags and puffiness around the lower eyelids and tightening of the soft tissues on the forehead to provide younger appearance. According to the American Society of Aesthetic plastic surgery statistics, approximately 249,343 brow lift procedures were performed in 2017. This number is expected to increase considerably during the forecast period.

Ambulatory surgical centers accounted for the largest market share of over 60% in 2018 and the segment is expected to dominate the market throughout the forecast period. The high share is primarily attributed to the increasing number of outpatient surgeries that do not require a hospital stay. Availability of ambulatory surgery center is helping in transforming healthcare facilities as well as the market for medical equipment. These surgical centers can offer surgical procedures at 35% to 50% lower price compared to hospitals. In 2018, there were 5,700 ambulatory surgical centers operating in U.S with a combined revenue accounting to USD 35 billion. 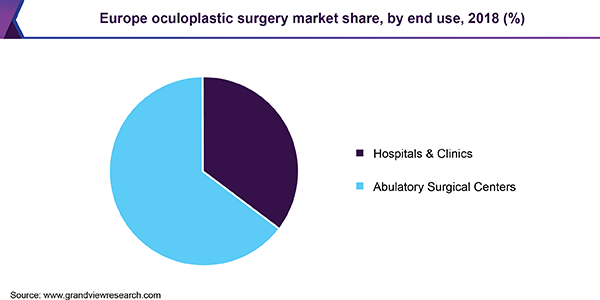 Hospital segment is also expected to witness considerable growth during the forecast period. The key drivers of the segment are the rising incidence of eye disorders, increasing number of hospitals, development of healthcare infrastructure and rising healthcare expenditure, increasing private sector are among the reason for the growth of the segment. Furthermore, factors such as the availability of highly qualified surgeons and advanced medical equipment is also driving the segment growth.

North America led the market in 2018 owing to the growing procedural volume and the high cost of the treatment. North America has a large addressable population with millennial aesthetic user rate tripled in the past four years in the U.S. alone. U.S dominated the regional market for oculoplastic surgery in the same year driven by high number of procedures performed in the country. According to the American Society of Aesthetic Plastic Surgeons, blepharoplasty-removal of excess tissue around the eyelids-is one of the most common cosmetic procedures performed in the country. In 2018, 115,000 blepharoplasty procedures were performed in U.S.

Asia Pacific is expected to register the fastest CAGR of 6.62% during the forecast period. The cost of plastic surgery performed in developed as compared to developing countries varies significantly which is the primary regional growth driver. Japan is leading in the APAC region owing to a large number of beauty conscious people and rising aging population. According to the International Society of Aesthetic plastic, approximately 90% of all cosmetic surgeries were performed on the face in 2017. Latin America is also expected to grow significantly in the forecast period due to the rise in a number of eye-related surgeries. According to the International Society of Aesthetic Plastic, Brazil recorded 159,720 eyelid procedures in 2017, which is more than the U.S. (141,505)

This report forecasts revenue growth at global, regional, and country levels as well as provides an analysis of the latest industry trends in each of the sub-segments from 2015 to 2026. For the purpose of this study, Grand View Research has segmented the global oculoplastic surgery market report on the basis of procedure, end use, and region:

How big is the oculoplastic surgery market?

What is the oculoplastic surgery market growth?

Which segment accounted for the largest oculoplastic surgery market share?

b. North America dominated the oculoplastic surgery market with a share of 30.2% in 2019. This is attributable to the growing procedural volume, large addressable population with millennial aesthetic user rate and the high cost of the treatment.

Who are the key players in oculoplastic surgery market?

What are the factors driving the oculoplastic surgery market?

b. Key factors that are driving the market growth include the increasing number of eye-related disorders, technological advancement, and growing number of age-related oculoplastic surgeries.