The global omega 3 market size was valued at USD 2.49 billion in 2019 and is expected to expand at a CAGR of 7.7% over the forecast period. The industry is driven by rising penetration of omega 3 in the active pharmaceutical ingredient (API) market. Rising awareness regarding chronic diseases, expanding the application scope of omega 3, and regulations favoring the usage of omega 3 in infant formulations are contributing to the market growth. Following this trend, key companies are actively involved in obtaining product certifications to maximize their reach in the market. 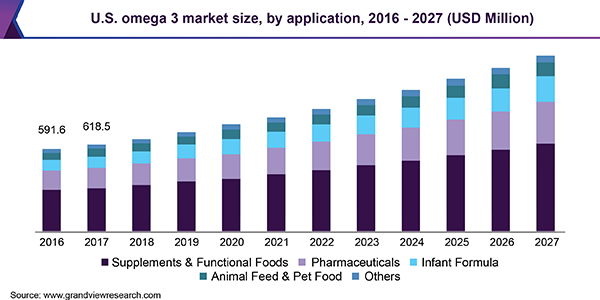 Supplements & functional foods emerged as the largest application segment in North America in terms of demand. This can be attributed to the fact that omega 3 is highly effective in the treatment of a variety of health conditions, including depression, bone loss, menstrual health, and mental health, which has led to its increased utilization in the aforementioned application segment.

However, one of the most prevalent challenges being faced by the conventional omega 3 ingredient manufacturers is to offer products with a competitive price range. This is more relevant for the companies that offer omega 3 ingredients from alternative sources, such as krill and algae oils. These companies are facing challenges to sell products at competitive prices relative to fish oil sourced naturally DHA and EPA.

Changing consumer lifestyle and growing concerns regarding health issues, especially coronary heart diseases and developmental disorders, are expected to further fuel the product demand over the next few years. Proven benefits of omega 3, particularly for cardiovascular diseases, coupled with rising cases of cardiovascular diseases among all the age groups globally, are anticipated to fuel the demand for omega 3-based pharmaceutical products over the forecast period.

On the basis of type, the market is segregated into eicosapentaenoic acid (EPA), docosahexaenoic acid (DHA), and alpha-linolenic acid (ALA). The combination of DHA and EPA helps in reducing bad cholesterol and coronary heart diseases, such as strokes and blood pressure, which, in turn, is expected to fuel the growth of these segments.

With respect to this, rising incidences of heart diseases among individuals as a result of an unhealthy lifestyle are likely to fuel the demand for omega 3. Increasing aquaculture activities, mainly in the Asia Pacific, owing to the abundant availability of farming land and favorable climatic conditions are projected to drive the demand for feeds containing omega 3.

In terms or revenue, the EPA-based and DHA-based omega 3 segments are projected to expand at a CAGR of 6.5% and 6.0% over the forecast period, respectively. The DHA and EPA-based products are gaining traction and are increasingly becoming an integral part of the daily diet among consumers on account of the rising prevalence of lifestyle diseases as well as the adoption of preventive healthcare measures among people. Additionally, emerging applications of DHA and EPA in dietary supplements, clinical nutrition, and infant formulas are augmenting the growth of these segments.

In terms of application, the global omega 3 market is segregated into supplements & functional foods, pharmaceuticals, instant formulas, pet & animal feed, and others. The supplements & functional foods segment dominated the industry in 2019 on account of various health benefits of omega 3, rising R&D initiatives, and increasing healthcare costs. Growing utilization of dietary supplements to maintain fitness and nutrient adequacy among adults is projected to augment the consumption of omega 3 in dietary supplement products.

Supplement and functional foods are primarily consumed with the intention to ensure the intake of nutritional constituents important for the human body. Rising occurrences of cardiovascular diseases owing to the inactive and slow lifestyle, especially among the age group of 30 to 40 years, and fluctuating dietary patterns are the factors projected to propel the importance of omega 3-based nutraceutical products in the market over the next few years.

Growing awareness regarding the reduction in calorie intake among gym professionals and athletes in several countries, including China, Italy, India, and U.S., is likely to promote the use of omega 3 in sports supplement and functional food products. Furthermore, the increasing importance of omega 3 fatty acids at the global level owing to the implementation of new advertising campaigns by companies, such as Koninklijke DSM N.V. and BASF SE, is anticipated to have a significant impact on the segment growth.

Wide scale utilization of omega 3 in the pharmaceutical industry is likely to drive the pharmaceuticals application segment in the upcoming years. Omega 3 is used for its anti-inflammatory properties as well as for the treatment of depression, cancer, Alzheimer’s, osteoporosis, and cardiovascular diseases. Moreover, increasing utilization of omega 3 in producing pharma grade capsules to treat obesity is anticipated to drive the segment.

On the basis of source, the omega 3 industry is bifurcated into two categories, namely marine sources, and plant sources. In terms of revenue, marine source of omega 3 fatty acids accounted for a share of 82.5% in 2019 and is anticipated to witness significant growth over the forecast period.

Demand for the marine-based products is driven by growing consumer interest in omega 3 fatty acids extracted from fish and krill oils. Rising consumption of omega 3 in the form of fortified food products, such as fish ham and fish sausages, is anticipated to drive the segment over the next few years. Moreover, growing awareness pertaining to the consumption of high triglyceride levels is anticipated to propel the demand for omega 3-fortified foods. 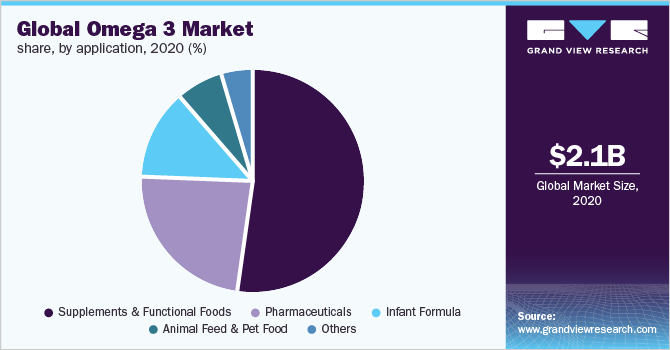 Three types of omega 3 fatty acids namely docosahexaenoic acid, eicosapentaenoic acid, and alpha-linolenic acid constitute human physiology. The first two omega 3 acids are commonly found in marine oils, whereas plant oils are the major source of alpha-linolenic acid. Key players in the industry are producing marine-based EPA and DHA products on account of scarce availability of EPA and DHA in the plant-based sources

North America emerged as the largest market in 2019 on account of increasing utilization of the product in the pharmaceutical industry, coupled with growing research & development activities. Moreover, rising consumption of improved medication, along with the need to increase the life expectancy of the aging population, is expected to propel the demand for omega 3-based pharmaceutical products in the region.

The Asia Pacific is expected to witness considerable growth over the forecast period owing to rising demand for the product in countries, such as China, India, Singapore, South Korea, Australia, and Japan. Rising intake of fish oil in the daily diet, as well as increasing health awareness, are augmenting the demand for omega 3 in this region. Moreover, growing cultivation of krill fish in the South China Sea and the Indian Ocean is expected to propel the regional market growth over the next few years.

In terms of revenue, Europe accounted for a share of 22.4% in 2019 and is anticipated to exhibit significant growth over the forecast period. Increasing product consumption, especially in the form of dietary supplements, on account of the growing aging population in developed economies, such as Germany, France, Netherlands, and U.K., is likely to drive the market.

Western Europe, comprising countries such as Belgium, Spain, and Portugal, is projected to have an aging population of over 20% of the global population, thereby leading to an increase in healthcare expenditure in Europe. Furthermore, the region holds a significant share in terms of demand for omega 3 owing to its growing utilization in the pharmaceutical, pet & animal feed, and infant nutrition industries.

The competitive positioning is based on three parameters, namely operating strategies, competitive edge, and weaknesses. Key operational strategies adopted by the manufacturers in the market include product quality development and capacity expansion. Manufacturers are focusing on product differentiation by introducing different forms of products, such as tablets, liquids, and powder.

Moreover, they are increasing their R&D on extraction processes. Companies are also investing in procuring shipping vessels to gain strategic advantage and ensure an efficient supply of raw materials. Some of the key market players are Aker BioMarine, Axellus, BASF SE, DSM, Omega Protein Corporation, GC Reiber Oils, and Lonza.

This report forecasts revenue growth at the global, regional, and country level and provides an analysis of the latest industry trends and opportunities in each of the sub-segments from 2016 to 2027. For the purpose of this study, Grand View Research has segmented the global omega 3 market report based on product type, source, application, and region:

How big is the omega 3 market?

What is the omega 3 market growth?

Which segment accounted for the largest omega 3 market share?

b. On the basis of application, the supplements & functional foods segment accounted for more than 52.0% of the revenue share in the omega 3 market in 2019.

Who are the key players in the omega 3 market?

What are the factors driving the omega 3 market?

b. The key factors that are driving the omega 3 market include the growing consumption of the product in the active pharmaceutical ingredient (API) market. This development is attributable to rising health consciousness among consumers across the globe following a rise in the spread of chronic diseases.