The global on-highway vehicle lighting market size was valued at USD 26.98 billion in 2021 and is projected to expand at a compound annual growth rate (CAGR) of 4.9% from 2022 to 2030. The growing penetration of LED lighting in the automotive industry along with rising sales of commercial vehicles and passenger cars is anticipated to drive the industry growth over the forecast period. Furthermore, government agencies and authorities across the globe have been enlisting effective regulations regarding the use of lighting systems in vehicles, which are projected to create noteworthy growth opportunities for players operating across the value chain of the market. 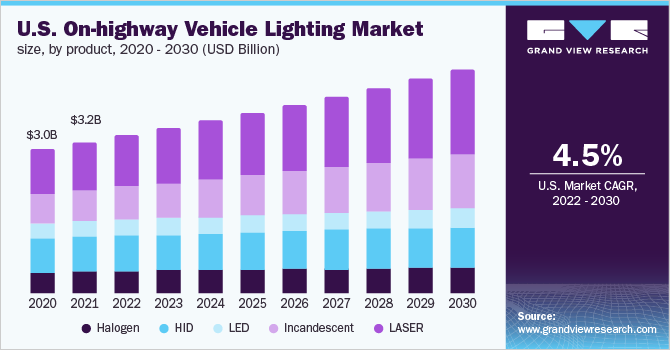 The COVID-19 pandemic has negatively impacted the demand for on-highway vehicle lighting in 2020 and 2021. The overall automotive production volumes have witnessed a significant decline globally on a year-on-year basis, primarily due to the decreased production volumes in Europe and North America, among several other regions. The decreasing sales of commercial and passenger vehicles have had a subsequent impact on the demand for the product. The automotive lighting industry also had to face issues in raw material supplies and production delays due to looming delays in international import and export shipments. However, as governments gradually announced relaxation in the lockdown norms and allowed businesses to operate with mandates of social distancing, the market is likely to regain strength supported by the growing demand for cars from the middle-class population.

Low visibility, particularly during night time, has been an important reason behind the growing number of road accidents globally. A strong emphasis is being put on the vehicle headlights' performance as research continues to expose safety concerns. For instance, given the effects of unfavorable weather conditions on forward visibility, the European Union (EU) has mandated the use of Daytime Running Light (DRL). As such, 17 countries in the EU have drafted effective legislation related to installing DRLs in vehicles. In Canada, the Motor Vehicles Safety Act (MVSA) mandates the use of DRLs in all vehicles used in the country.

The adoption of LED lighting has gained traction in numerous industries, and they have aligned with reducing LED costs over the past decade. LED lamps are used in automobiles due to various reasons. Apart from offering better durability & controllability and consuming lesser energy, LED lamps can deliver cool daylight color and instant brightness, thereby improving visibility and reducing the light glare ratio compared to the adaptive high beam lights. Furthermore, LED lamps can also be used as Center High-Mounted Stop Lamps (CHMSL) and Daytime Running Lights (DRLs).

The LED segment dominated the market and captured around 40% of the on-highway vehicle lighting demand in 2021. The segment is projected to register a CAGR exceeding 4% over the forecasted period owing to the growing demand for LEDs for passenger cars, especially in countries such as Germany, China, India, and the U.K. LED lamps can deliver cool daylight color and instant brightness, thereby improving visibility and reducing the light glare ratio compared to the adaptive high beam lights. Furthermore, LED lamps can also be used as Center High-mounted Stop Lamps (CHMSL) and Daytime Running Lights (DRLs). For instance, Cadillac CT6 offers a headlight that includes 16 LEDs that flank the headlight in long vertical lines. The 16 LEDs are used as both DRLs and DRL integrated turn-signal indicators.

The LASER segment is anticipated to record the highest CAGR of over 6.8% over the forecast period due to the growing demand for luxury vehicles across the emerging and developed economies. A LASER produces powerful bright light by stimulating gas with a laser beam. The benefit of incorporating LASER technology into vehicle headlamps is its compact size and ability to illuminate a significant stretch of the road compared to other light sources. In general, LASER lights emit around 160-170 lumens per watt, which is much higher than what LEDs emit, i.e., 100-120 lumens per watt.

The headlight application segment captured over 60% of the on-highway vehicle lighting market share in 2021 and is projected to retain its dominance in the forthcoming years. Headlights form an essential part of an automotive lighting unit. They comprise front headlamps, DRLs and side lamps, and fog lamps. The demand for headlights is driven by the growing production of motor vehicles and changing prices of light sources used in these vehicles, such as LASER, halogen, LED, and HID. Moreover, constant advancements in technology focusing on headlamp designs to offer long-range visibility in low-light conditions are also fueling on-highway vehicle lighting market growth.

The interior lights segment is projected to record the highest CAGR of around 5.3% over the forecast period due to the increasing use of LEDs in internal lights. The declining prices of LEDs and increasing awareness about energy efficiency have attracted more consumers toward ambient lighting. Ambient lighting is the soft illumination around instrument clusters, door handles, dashboards and footwells.

Considering the type of vehicle, the passenger car segment accounted for the largest revenue share of over 40% in 2021 and is expected to maintain its dominance over the projected period. The segment is expected to record the highest CAGR during the forecast period due to the increasing vehicle fleet and vehicle per capita globally. Passenger cars occupied the majority share of over 70% of total vehicle production in 2020. In Europe, according to ACEA, vehicles per capita were recorded at 569 vehicles per 1,000 inhabitants in 2019. Besides, emerging economies such as China and India are expected to further escalate the market in the future.

Asia Pacific accounted for the largest revenue share of over 50% in 2021 and is expected to retain its dominance during the period in focus. It is projected to register the highest CAGR from 2022 to 2030, due to the improved demand for passenger vehicles in various emerging economies such as India and China. As per the data published by the OICA, over 91 million new commercial and passenger vehicles were registered or sold globally in 2019. Of this, over 48% of the global total were sold in Asia. This has led to a substantial increase in demand for on-highway vehicle lighting in the region. 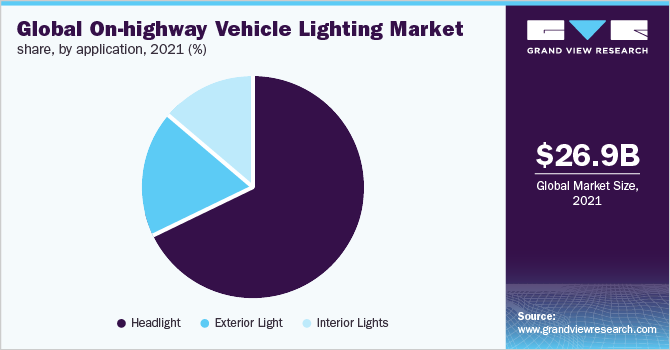 Europe is estimated to register the second-highest CAGR of over 5% over the forecast period. Germany produced over 15% of Europe’s overall motor vehicle production. The country is home to motor vehicles manufacturing leaders such as BMW, Audi, Mercedes, Volkswagen, Ford, and Porsche. Besides, in the U.K., the government has banned the aftermarket of HID lighting kits used to covert standard halogen lamps to standard HID xenon headlamps. This has opened prospective opportunities for LED light sources, thereby fueling the industry expansion.

Organic growth remains the key strategy for the overall industry, with a focus on mergers and acquisitions to expand presence and product offerings. For instance, in February 2020, KOITO MANUFACTURING CO., LTD. announced the acquisition of the shares of Cepton Technologies, Inc., a manufacturer of LiDAR for autonomous driving vehicles and advanced driver assistance systems. The acquisition  is likely to allow the company accelerate the commercialization of high-performance LiDAR.

Market players are also focusing on product launches aimed to expand product offerings and to meet consumer demands. For instance, in November 2020, Optronics International LLC announced the launch of eight LED utility and work lights. The LED lamps are available in different sizes and shapes and come in retail packages and bulk. Some prominent players in the on-highway vehicle lighting market include:

This report forecasts revenue growth at the global, regional, and country levels and provides an analysis of the latest industry trends in each of the sub-segments from 2018 to 2030. For this study, Grand View Research has segmented the global on-highway vehicle lighting market report by product, application, vehicle type, and region:

How big is the on-highway vehicle lighting market?

What is the on-highway vehicle lighting market growth?

b. The LED segment captured around 24.7% of the global on-highway vehicle lighting market in 2021.

b. The headlight application segment led the global on-highway vehicle lighting market and captured over 65.5% of the global share.

Which vehicle type accounted for the highest share in the on-highway vehicle lighting market?

b. The passenger car segment led the global on-highway vehicle lighting market and accounted for the largest revenue share of over 44.1% in 2021.