The global open MRI systems market size was valued at USD 906.0 million in 2018 and is projected to grow at a CAGR of 6.4% by 2026. Growing incidence of age-associated chronic diseases, changing lifestyles, and high demand for safe & accurate diagnostic methods are among the major factors expected to drive the growth of the overall market. For instance, as per the American Cancer Society, in 2016, brain and spinal cord cancer accounted for about 1.3% of all cancers in the U.S. Increasing need for early and accurate diagnostics tools is expected to positively impact growth during the forecast period. 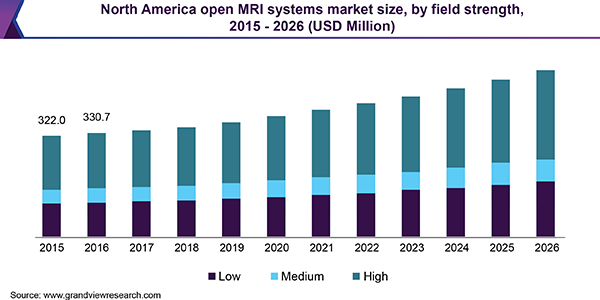 Open MRI systems pose less risk of panic attacks and claustrophobia, leading to wide acceptance of these systems by patients suffering from these conditions. Open systems are largely preferred for scanning infants and can accommodate obese & stockier patients. Hospitals and diagnostic centers prefer purchasing open systems as they allow diagnostic imaging of a wide range of conditions.

The growth of this open MRI systems market can be attributed to the increasing geriatric population and rising prevalence of cancer globally. For instance, as per the American Society of Clinical Oncology (ASCO), 60% of the cancer population is 65 years and older. The availability of effective therapeutic methods and increasing life expectancy are expected to fuel the need for repetitive diagnostic scans for effective disease management, thus boosting demand.

Increasing application of MRI in various diagnostic imaging techniques is expected to boost the demand for these devices. For instance, as per Organisation for Economic Co-operation and Development (OECD), in 2017, 111 scans per 1,000 inhabitants were performed in the U.S. Similarly, in Canada, 51 per 1,000 inhabitants MRI exams were performed in 2017, which is expected to contribute to growth over the forecast period. 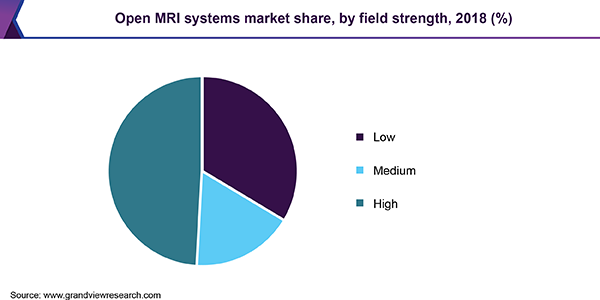 Owing to the limitation of open structure, there is a limited number of high strength systems available in the market. However, the high strength systems segment is expected to grow at the highest CAGR during the forecast period. This can be attributed to a large number of ongoing studies and positive results coupled with technological advancements in these systems to enhance captured images.

On the basis of application, the market is segmented into the brain, spine, abdominal, breast, cardiac, and others. The brain segment accounted for the largest share in 2018. Aging impacts the neurological health of individuals, thus making them susceptible to various associated disorders. Hence, the growing geriatric population is expected to propel the growth of the segment over the forecast period. Owing to the rising incidence of neurological conditions, the need for diagnostic devices is increasing, which in turn is boosting the demand for open systems. Moreover, increasing the development of open systems for diagnosing neurological conditions is expected to drive the growth of the brain segment.

The usage of open MRI systems for breast imaging is expected to grow at a significant rate during the forecast period. Increasing prevalence of breast cancer is fueling the need for open MRI systems for breast imaging. For instance, as per the World Cancer Research Fund, in 2018, 2 million new breast cancer cases were reported.

MRI helps in determining anomalies in spine anatomy, trauma injury in bone, ligament, disc, & spinal cord, compression or inflammation of spinal cord & nerves, and other spinal conditions. Hence, the adoption of open MRI systems is expected to grow for spine imaging owing to various advantages associated with these systems.

North America held the largest share in 2018 owing to the presence of a large number of major market players and high adoption of advanced diagnostic technologies. An increase in the application of MRI in the diagnosis of a wide range of diseases, favorable government policies, and a rise in the number of ambulatory diagnostic centers in the region are some of the major factors expected to drive growth during the forecast period.

Europe accounted for the second-largest share of open MRI systems market in 2019. According to OECD, in 2015, Germany accounted for the highest number of MRI scans in the region. The country reported 136 scans per 1,000 inhabitants in the year. In addition, rapidly changing healthcare infrastructure and supportive government policies in the region are among the factors expected to drive the segment growth.

Asia Pacific is anticipated to grow at the fastest CAGR during the forecast period due to the presence of growing economies including China and India. Increasing medical tourism in the region and intense competition among healthcare service providers are some of the factors expected to boost the demand for advanced MRI systems in the market.

Some leading players are GE Healthcare, Hitachi Medical Systems, Koninklijke Philips, Siemens Healthcare, Canon Medical Systems Corporation, and ESAOTE. These players are focusing on growth strategies such as the launch of new products, innovations in existing products, and mergers & acquisitions. For instance, the introduction of 1.2T MRI by Hitachi and the integration of this system with SoftSound technology is considered an important milestone in the market.

This report forecasts revenue growth at global, regional, & country levels and provides an analysis on the industry trends in each of the sub-segments from 2015 to 2026. For the purpose of this study, Grand View Research has segmented the global open MRI systems market report on the basis of field strength, application, and region:

How big is the open mri systems market?

What is the open mri systems market growth?

b. North America dominated the open MRI systems market with a share of 37.8% in 2019. This is attributable to rising presence of a large number of major market players and the high adoption of advanced diagnostic technologies.

Who are the key players in open mri systems market?

What are the factors driving the open mri systems market?

b. Key factors that are driving the market growth include the growing incidence of age-associated chronic diseases, changing lifestyles, and high demand for safe & accurate diagnostic methods.