The global organic seed market exceeded USD 1.5 billion in 2014. Increasing organic food demand in the recent past is expected to drive the global organic seed industry over the forecast period. Such trends have resulted due to the growing awareness regarding negative health impacts related to hazardous chemicals used in agriculture.

Environmental concerns regarding chemical utilization in conventional agriculture is a key factor that is presumed to aid such farming, which in turn is presumed to assist the market in the near future. The favorable regulatory framework is another major factor that is expected to support market growth over the next seven years. 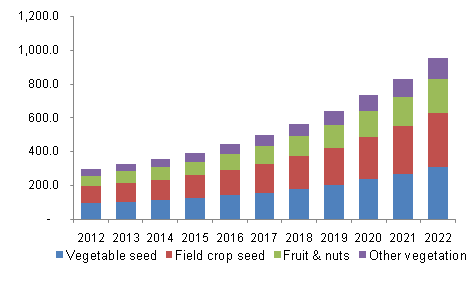 Initiatives taken by governments and agencies related to agriculture are presumed to play an important role in shaping the global industry over the forecast period. Brisk increase in demand over the recent past has resulted due to the growing awareness regarding health benefits related to organic food consumption.

These food products have several superior characteristics such as high antioxidants and other nutritional values. These products are devoid of any exposure to chemicals such as fertilizers, pesticides, and insecticides, are deemed healthier than their conventional counterparts.

Key products include seeds of vegetables, field crops, fruits & nuts, and other vegetation. Vegetables and fruits & nuts are presumed to witness the highest growth rates over the forecast period.

Concerns regarding chemicals and genetically modified seeds have played a major part in shifting consumer preference. Such a trend is expected to aid the industry over the forecast period.

Developed regions including North America and Europe accounted for over half of the global industry in the recent past. Such a trend is presumed to continue over the forecast period owing to growing organic food demand in these regions. North America accounted for the highest market share, followed by Asia Pacific and Europe.

Asia Pacific is estimated to witness the highest growth rate over the next seven years owing to several prominent factors such as rising disposable income, growing health awareness, and favorable regulatory framework.

Governments and agricultural agencies have taken multiple initiatives that include favorable policies and tax incentives to encourage organic farming. Such initiatives coupled with growing awareness regarding food benefits are expected to assist the regional market in the near future.

Asia Pacific and Central & South America cater to the growing organic food demand in the developed regions. The majority of the produce in the developing regions is exported to developed markets such as North America and Europe. China, India, Brazil, Argentina, and Australia are expected to lead their respective regional markets over the next seven years.

Organic seed market share is characterized by numerous industry participants including local and regional organic growers which result in high industry rivalry. There is a substantial supply-demand imbalance resulting from rapid demand growth in the recent past. Such an industry position leads to high supplier bargaining power and low buyer bargaining power.