The global organic tobacco market size was valued at USD 141.8 million in 2018 and is expected to expand at a CAGR of 7.4% during the forecast period. Rising awareness among occasional as well as heavy smokers regarding the advantages of using organic flavored tobacco to quit smoking is projected to remain a favorable trend in near future. Furthermore, these products find use as they do not contain any harmful substances including ammonia, bleach and pesticides.

Over the past few years, tobacco farmers have been increasing spending on adopting organic farming methods which boost the crop yield as compared to conventional cultivation technologies. Furthermore, the United States Department of Agriculture (USDA) permitted use of the product for smoking as well as non-smoking applications. 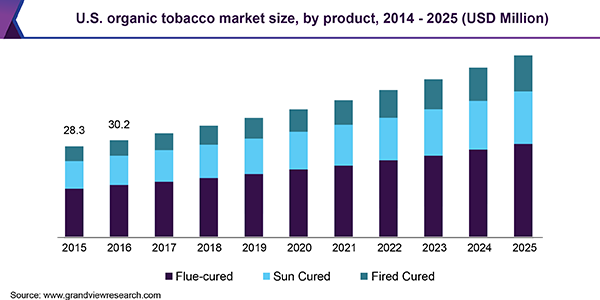 The majority of smokers are now shifting towards organic tobacco rolled cigarettes, which is positively impacting the market. Rising health awareness is driving smokers to change their preferences. As the product is less harmful compared to conventional tobacco, the majority of smokers have been shifting their focus towards the consumption of cigars and cigarettes derived from organic tobacco, instead of quitting the smoking habit completely. This factor projected to drive product demand over the projected period.

The smoking segment is one of the lucrative markets which is anticipated to retain its dominance over the forecast period. The sub-segment, roll-your-own tobacco, is gaining popularity and is one of the key reasons propelling the organic tobacco market growth. The key driver here is anti-tobacco activists who have a belief that organic tobacco compels one to quit smoking.

Increased utility of water pipes and hookah in the Middle Eastern countries is projected to expand the scope of smoking. This trend is anticipated to continue in the forthcoming years. Smoking is also expected to come out as an attractive segment and to create its dominance in Middle East countries in the near future.

Flue-cured product forms generated a revenue of more than USD 60 million in 2018. These products. High sugar content along with the limited composition of nicotine in flue-cured forms is expected to promote its usage among smokers over the next eight years. Fire-cured tobacco is expected to witness the fastest CAGR of 9.7% from 2018 to 2025. The excellent flavor is projected to promote the product demand for chewing as well as smoking purposes in the near future.

The market revenue from sun-cured product forms is expected to reach USD 67.4 million by 2025. Consumers of Mediterranean countries including Turkey, Greece, Bulgaria, Macedonia, and Romania prefer these products. Furthermore, low sugar content in the product is projected to promote demand over the next eight years.

The smoking segment is expected to reach USD 196.1 million by 2025. Rising concerns over adverse effects associated with carbon monoxide, heavy metal, and tar which leads to diseases such as Chronic Obstructive Pulmonary Disease (COPD) is projected to limit the scope of organic tobacco for smoking applications. 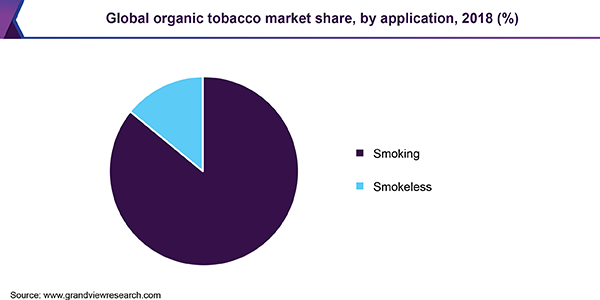 Demand from the smokeless segment is expected to witness a CAGR of 9.8% from 2018 to 2025. The rising importance of mint chew pouches as alternatives to conventional cigars and cigarettes among adults in developed economies including Germany, France, and U.K. is projected to expand the market size over the projected period.

North America is expected to remain one of the key markets, accounting for more than 30% of global revenue in 2018. Increasing spending on the development of organic products with reduced harmful properties by the tobacco processing companies is anticipated to bode well for the growth. In October 2017, Japan Tobacco Inc. launched a new USDA approved product under the name of Natural American Spirit Organic Leaf, which is additive-free. Shifting preference among buyers to consume organic tobacco products in the form of cigarettes and cigars instead of quitting smoking the conventional ones is projected to remain a key driving force in the near future.

Asia Pacific is expected to witness the fastest CAGR of 8.9% from 2018 to 2025. Countries including China, India, and Japan are experiencing a considerable rise in product demand, owing to factors such as a rise in income levels, consumer awareness, and an attempt to opt for less harmful products. Furthermore, India accounted for more than 80% of global smokeless tobacco consumption in 2018. This factor is projected to expand the scope of organic tobacco as a smokeless and eco-friendly alternative over the next eight years.

In 2015, Japan Tobacco Inc. completed the acquisition of Natural American Spirit, which includes nine subsidiaries owned by Reynolds American Inc. (RAI). Supportive policies aimed at upscaling the agriculture output through the utilization of organic farming by the governments of China and India is expected to open new business avenues for organic tobacco manufacturing firms in the near future.

This report forecasts revenue growth at global, regional, and country levels and provides an analysis of the latest industry trends and opportunities in each of the sub-segments from 2015 to 2025. For the purpose of this study, Grand View Research has segmented the global organic tobacco market report on the basis of product, application, and region: