The global packaged milkshakes market size was valued at USD 238.6 million in 2018 and is expected to expand at a CAGR of 6.3% over the forecast period. An increase in the number of health-conscious consumers and their hectic life schedules are the key factors driving the market. Demand for a packaged milkshake is expected to propel in the forecast period as it contains proteins, vitamins, and other trace elements and is consumable on the go.

Furthermore, increasing demand for the packaged milkshake due to the growing trend of consuming more of probiotic drinks, which are rich in nutritional ingredients, in the breakfast is a key factor driving the market for a packaged milkshake. Increasing health-conscious consumers has brought a change in the market to a great extent. Milkshakes that are rich in functional content are perceived to be good for skin, increase energy level, improve the immune system, and help to grow the overall wellbeing. 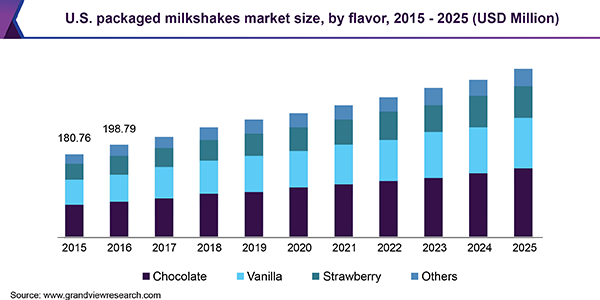 Apart from increasing health consciousness among the consumers, the advertisements and brand personification also play an important role in fueling the market growth. Manufacturers are coming up with interactive advertisements with famous sportspersons to show that the packaged milkshake is healthy and thus impelling the market growth. Preference for these milkshakes is increasing among young consumers as it is handy and can be used while doing any activity. The growing working population and trend of traveling to places are also expected to increase the demand for a packaged milkshake.

However, the market for a packaged milkshake is expected to face challenges due to frequent fluctuation in the raw material prices. The raw material price varies from region to region, thus it brings a challenge to the manufacturers to maintain the profit margins. For instance, in the U.S., the milk farmers are finding it difficult to survive as they are squeezed out of a changing milk market. This can lead to a decrease in milk production, thus increasing the price.

The local vendors in countries such as India can also restrain the packaged milkshakes market growth soon as the market also consists of consumer groups who prefer to have milkshakes from local vendors due to availability of customization rather than the packaged one. Although, huge demand for the product from consumers of regions such as Europe and Asia is expected to negate the restraining factors in the long term, thus fueling the market growth in the forecast period.

Based on flavor, the market for a packaged milkshake is further divided into chocolate, vanilla, strawberry, and others. The chocolate flavor is among the most preferred flavors in a packaged milkshake and the flavor accounted for 39.2% share of the overall revenue in 2018. The chocolate is prepared from the cocoa seeds and has been perceived to be a natural product. The sweet aroma of the milkshake is also a key factor for the popularity of the flavor among the consumers.

Health-conscious consumers prefer to have chocolate due to its health benefits as it is good for the hearth. According to a report published in the Journal of Alzheimer’s Disease, chocolate lowers the risk of cognitive decline in the older age group. Apart from chocolate, the vanilla flavor is also widely popular among the consumers and is anticipated to witness significant growth in the forecast period. The vanilla flavor is perceived to be made purely of milk and thus is good for health. This, in turn, is driving the demand for vanilla-flavored packaged milkshakes.

Based on packaging material, the paper segment dominated the market, accounting for 37.2% share of the global revenue in 2018. Increasing the use of tetra packs due to growing consumer preference towards such packaging is driving the segment and is expected to boost the growth in the forecast period. Consumers prefer glass packaged milkshakes due to their easy handling and thus can consume anytime even while doing any activity. The preference for such packaging from the manufactures is due to the low cost of packaging associated with it as compared to other packaging types such as metal. 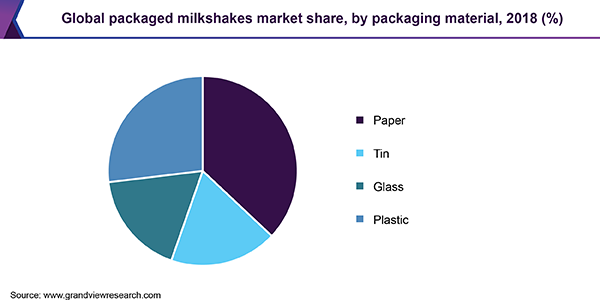 Apart from paper, glass as a packaging material for packaged milkshakes is expected to witness significant growth in the forecast period. Demand for glass is increasing due to its salient features including healthy, non-toxic, and expediency, coupled with transparency, which provides the packaged milkshake a natural look. Glass being non-reactive to consumable products keep the milkshake healthy and safe for a longer time. The material possesses properties of recyclability and inertness and can be reused. Thus, the aforementioned factors are driving the market and are expected to propel the demand for glass packaged products in the coming years.

In 2018, Asia Pacific led the market for a packaged milkshake with a share of 32.0% and is anticipated to witness significant growth soon. In the Asia Pacific, Japan is found to be the leading market and is expected to witness significant growth in the forecast period. A large number of flavors, coupled with food chains such as McDonald’s, are expected to drive the market for a packaged milkshake in the region.

Apart from the Asia Pacific, the Middle East and Africa is found to be the fastest-growing region and is expected to expand at a significant CAGR of 7.2% in the forecast period. The hot and humid climate of the region, coupled with innovation in the flavors by the manufacturers, is a key factor boosting the market growth in the region. Furthermore, the growing corporate sector in countries such as Dubai and the trend of being fit and good looking, coupled with hectic life schedules of the corporates, are expected to drive the demand for packaged milkshakes, thereby impelling the market growth in the region.

Dean Foods, The Hershey Company, Danone, Nestle, GCMMF, CavinKare, Mother Dairy Fruits & Vegetables, Britannia, FrieslandCampina, and Muller UK & Ireland are some of the major market players in the industry. The market presents medium to low entry barriers due to the presence of local vendors in the unpacked milkshakes and unstructured market. The market for a packaged milkshake is further driven by packaging designs and innovation in the flavors.

The manufacturers are practicing the technique of research and development to understand the purchasing behavior of their target consumer groups. Promotional campaigns, sponsorships, and advertisements are some of the key ideas to get an edge over the competitors. For instance, Amul came up with a tagline “cheers to the leaders, keep your body moving” during a cricket match, showing that the drink is healthy and it keeps your body energized.

This report forecasts revenue growth at the global, regional, and country levels and provides an analysis of the latest industry trends in each of the sub-segments from 2015 to 2025. For this study, Grand View Research has segmented the global packaged milkshakes market report based on flavor, packaging material, and region: