The global passport reader market size was valued at USD 188.21 million in 2018 and is expected to grow at a compound annual growth rate (CAGR) of11.3% from 2019 to 2025. The increasing number of immigrants and the growing adoption of e-passports are anticipated to drive the growth of the market over the forecast period. Furthermore, technological advancements such as Optical Character Recognition (OCR), used for the alteration of images of typed or printed text into machine-encoded text, from a photo of a document, a scanned document, or a scene-photo, are also expected to drive the demand for a passport reader. The personal data of a passport holder is encoded in the RFID tags. 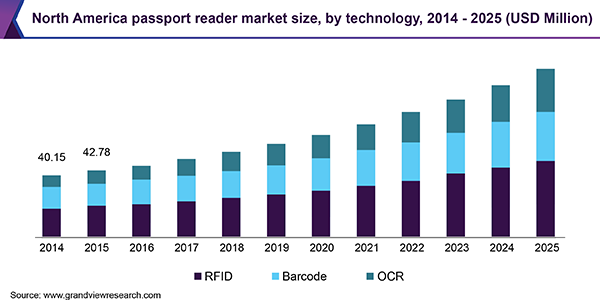 The use of a passport reader at airports to reduce time & queue for check-in and for error-free recording of information is expected to drive the market growth. Gemalto NV announced the launch of the AT9000 MK2 passport reader, which read and authenticated multiple documents easily, quickly, and accurately. The newly launched reader reads ID cards, passports, visas, ePassports, driver's licenses, national IDs, and military common access cards from printed documents and mobile phones. It also reads 1D or 2D barcodes such as QR code, DataMatrix, and PDF417 from the printed documents and mobile phones.

The need for authenticating passports at airport check-in points, border security, immigration points, and hotels is also projected to fuel the market growth over the forecast period. The growing number of cross-border travels and increase in terrorism activities are leading to the growing sales of passport readers. The increasing number of counterfeit passport cases, that are posing a threat to the national security of several countries, is further driving the demand for a passport reader. A reader used for passports with RFID tags, in which the data of the passenger is stored and read during check-in, helps identify counterfeit documents.

North America held the largest market share in 2018 owing to the growing number of travelers. In Asia Pacific, China and India are expected to grow at significant CAGRs over the forecast period. The growths of the countries can be attributed to the increasing airport traffic and presence of prominent manufacturers of passport reader. However, the high installation costs of a passport reader and some of the technical issues such as biometric feature leakage, clandestine scanning, and eavesdropping are expected to hinder the market growth.

The RFID segment dominated the market in 2018 and accounted for a market share exceeding 40%. The RFID technology involves the use of an RFID tag embedded in passports, which would be scanned to read the information. The increasing focus on enhancing security systems has created the need for use of RFID chips on visas and passports. The U.S. Department of State relies on the use of laser engraving and state-of-the-art security features for preventing counterfeiting and forgery of passports.

The optical character recognition segment is expected to witness substantial growth over the forecast period. The growth of the segment can be attributed to the need for converting several forms of documentation such as digital images and scanned paper into editable and searchable data. The OCR technology helps record the identity information of the passport holder, namely name, date of birth, gender, passport number, and nationality. The demand for better security and identification of passengers at airports, aircraft boarding counters, and airline tickets sales counters are expected to drive the demand for the OCR technology.

Based on type, the market has been further segregated into swipe reader, self-service kiosk, compact full-page reader, and others. The swipe reader segment accounted for the largest market share in 2018. A swipe reader features a magnetic strip where the information is stored and can be retracted when a card is swiped through the reader. This provides a rapid and convenient passenger service at the check-in counters of airports. The growing installation of swipe reader in banks, border control, transportation sector, law enforcement agencies, hotels, and car rental agencies to accurately record data is expected to drive the growth of the segment over the forecast period.

The self-service kiosk segment is projected to exhibit the highest growth over the forecast period owing to the high demand for efficient management of airport activities across the globe. A self-service kiosk installed at airports enables travelers to avoid long waiting hours in queues as well as delays at check-in points. It features an RFID tag for scanning passports and speeding up the entry process for travelers. The growing number of airport constructions are expected to drive the demand for self-service kiosks, especially in Europe and Asia Pacific regions.

The public sector dominated the passport reader market in 2018 and accounted for a market share of more than 65%. The growth of the segment can be attributed to the increasing installation of passport readers at border control, airport check-in, and immigration points to check the authenticity of documents. The deployment of self-service kiosks at check-in points of airports for managing airline passenger traffic and helping passengers to avoid delays are driving the segment growth. The increasing number of immigrants in countries such as Germany, Mexico, and Australia are also generating considerable demand for the installation of a passport reader in the public sector.

The private sector is expected to register the highest CAGR over the forecast period. The increasing demand for a passport reader from travel agencies and car rental & leasing companies is expected to drive the segment growth. A passport reader installed at hotels helps manage & store information of guests and increase hotel security. Furthermore, they are also used to authenticate the identity of guests. All these factors are anticipated to generate considerable demand for a reader in the private sector.

The airport security segment dominated the market in 2018 and is projected to continue dominating the market over the forecast period. The growing threats of human trafficking, border terrorism, smuggling, drug trade, and other criminal activities have led to the imposition of stringent security measures at airports across the world. The increasing use of a passport reader to validate identity of individuals and identify counterfeit passports at airports is driving the segment growth. Moreover, the installation & usage of security systems and investment for the development of advanced technologies & systems for enhancing airport security are contributing to the growth of the segment. 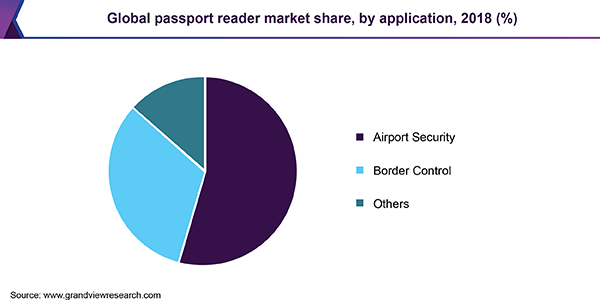 The border control segment is expected to witness significant growth in the next six years. The increasing use of a passport reader to detect altered or counterfeit documents of travelers is expected to drive the segment growth. The other factors responsible for the growth of segment are rising awareness about security concerns and need for enabling secure and fast border crossing for travelers. The installation of passport readers at border control points to reduce illegal immigration and human trafficking is further propelling the border control segment growth.

In 2018, North America dominated the market in terms of revenue owing to the increasing number of air passengers. The growing use of e-passports at hotels, airport terminals, immigration points, and so on is driving the demand of passport readers in the region. The region accounted for approximately 29% share of the global market in 2018. The U.S. held a major share in the North American market in 2018 owing to the increasing government investments in airport infrastructure and installation of passport readers at various airports for realizing hassle-free flow of passengers.

Asia Pacific is anticipated to exhibit the highest CAGR over the forecast period. Countries such as China and India are expected to generate considerable revenue over the next six years owing to the presence of several manufacturers and the development of advanced products such as self-service kiosks, combo readers, and so on. Prominent manufacturers in the APAC region include Shenzhen HCC Technology Co., Ltd. and Sinosecu Technology Co., Ltd. Additionally, the growing adoption of biometric passports and an increasing number of airports in Australia is further expected to fuel the region’s growth.

The companies accounted for a significant share of the global market in 2018. It has been observed that the companies in the market are focusing on new product development to provide better-quality products. For instance, 3M announced the launch of a travel document authentication system, named 3M ePassport Reader. This newly launched product helps authenticate some of the optical features such as crests, logos, ultraviolet images, and other graphical patterns on a passport. Some of the prominent players in the passport reader market include:

This report forecasts revenue growth at the global, regional, and country levels and provides an analysis of the latest industry trends in each of the sub-segments from 2014 to 2025. For the purpose of this study, Grand View Research has segmented the global passport reader market report on the basis of technology, type, application, sector, and region:

How big is the passport reader market?

What is the passport reader market growth?

Which segment accounted for the largest passport reader market share?

b. North America dominated the passport reader market with a share of 28.5% in 2019. This is attributable to growing use of e-passports at hotels, airport terminals, and immigration points among others.

Who are the key players in passport reader market?

What are the factors driving the passport reader market?

b. Key factors that are driving the market growth include technology advancements leading to growing adoption of e-passports and increasing number of immigrants worldwide.