The global pay TV market size was valued at USD 225.9 billion in 2019, registering a CAGR of more than 1.5% from 2020 to 2027. The integration of advanced predictive analytics models has led to the growing influence of Over-The-Top (OTT) media to provide better-customized suggestions. This advancement has promoted pay TV providers to diversify and enhance their services. Pay TV providers have started offering value-added services such as reduced subscription rates, customizable channel subscriptions according to users’ choice, and internet connectivity at low prices, which is expected to enable industry growth. Furthermore, pay TV providers, including AT&T Inc., are also offering bundled packages to provide omnichannel accessibility to its viewers across both OTT and pay TV, thus offering significant revenue-generating opportunities to service providers.

The broadcasters have realized the importance of UHD TV services, which has enabled them to offer improved picture quality. The growing demand for UHD services is driven by the increased number of households with flat panel displays, able to present HD content. Moreover, the pay TV provider’s investments in production lines and R&D are already sunk costs, and with the declining price levels, customers seem to be bound to adopt UHDTV services.

The widespread availability of broadband, high-speed internet, and powerful connected devices has enabled service providers to offer linear television services and Video-on-Demand (VoD) anywhere and anytime. This has resulted in an emerging trend of downloading large videos such as specific television shows or programs. Consumers are offered the ability to download the choice of content by pre-deciding the time period for content download and view these programs as and when needed, thus ensuring continual customer satisfaction and retention.

The satellite TV segment captured the highest revenue share in the pay TV market in 2019. The increasing demand from users to access newer networks, bonus features, and more modern channels is prompting service providers to diversify their service offerings. The current trend of experiencing live broadcasts of programs such as news and sporting events continues to offer a strong backbone to satellite television adoption. Furthermore, increasing demand amongst users to experience high-quality viewing experiences such as 4K and Ultra HD (UHD) picture quality and ability of satellite TV service providers to offer these services without bandwidth limitations is further encouraging the segmental growth. 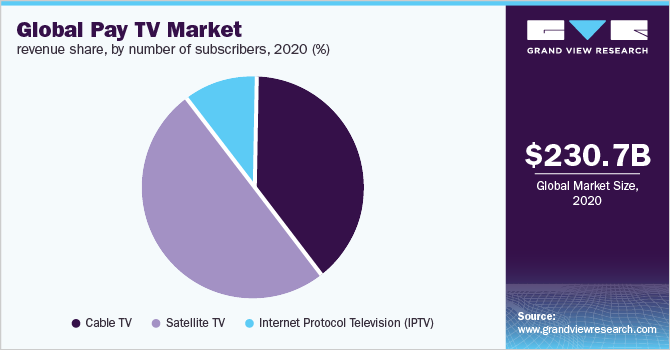 The cable TV segment also captured significant revenue share in the market for pay TV in 2019, owing to rising demand amongst customers to access and experience unbundled packages. Despite capturing a significant market share, the future doesn’t seem to be promising for the cable television providers. There is a growing number of cord-nevers, who have decided to skip pay TV altogether. The problem being, an increased number of households have started getting access to videos through other platforms instead of traditional cable television subscriptions. Moreover, prominent cable TV operators such as AT&T, Inc., Comcast Corporation, and DirecTV have witnessed a huge decline in the number of subscribers as consumers are switching to other media streaming platforms.

North America dominated the market for pay TV in terms of revenue share in 2019. Despite higher revenue share, the regional market is witnessing a decline owing to the rapid penetration of internet-enabled mediums and the advent of OTT platforms. The significant rise in instances of cord-cutting is urging service providers to shift their service offerings to online content delivery, to capture a large number of subscribers. Furthermore, the integration of advanced technologies such as Artificial Intelligence (AI) and Machine Learning (ML) to carefully analyze users’, viewing trends, and to offer customized suggestions is further prompting viewers to switch to OTT platforms. Additionally, lowering of profit margins in providing bundled packages over the years has resulted in service providers to refrain from these business methodologies. This, in turn, is impacting the growth of the market for pay TV, adversely.

Asia Pacific captured over 18% revenue share in the market for pay TV in 2019. IPTV has been the primary growth driver for the region owing to the rapid adoption of the online subscription business model amongst users. Furthermore, the increasing penetration of pay TV in rural households in regions such as China, India, and Indonesia has resulted in overall industry growth. Additionally, new initiatives by federal organizations, such as Telecom Regulatory Authority of India (TRAI) in India are allowing users to customize their choices and pay for channels according to their demands. This, in turn, is further enabling wide-scale adoption of pay TV services in the country, thereby contributing to the regional growth.

DIRECTV, DISH Network Corporation, Carter Communications, Foxtel, and Comcast Corporation are some of the significant players in the pay TV industry space. Service providers have started offering several channels and covering telecast of a higher number of live events, such as sporting events, thus getting a better opportunity to capture higher market share. Furthermore, service providers have started offering consumer-specific social media applications, which allows users in a geographic region, with similar interests, to socialize and witness live sporting events together. For instance, DIRECTV has launched a mobile application for Android and iOS phones, which allows sports fans in a geographic region to interact and engage with one another, meet at pre-decided places, and experience live matches together.

This report forecasts revenue growth at global, regional, and country levels and provides an analysis of the latest industry trends in each of the sub-segments from 2020 to 2027. For the purpose of this study, Grand View Research has segmented the global pay TV market report based on technology and region:

The Covid19 outbreak would require people to confine themselves at home for a prolonged period. This could have a positive impact on pay-TV viewership in the short term. Will the service providers be able to churn out revenues through long-term engagements? Our coverage in this market will account for and consider Covid19 as a key growth contributor.