The global smart TV market size was valued at USD 135.51 billion in 2016. The shifting consumer preferences toward online content as a result of growing proliferation of high-speed internet in most parts of the world are providing an impetus to the industry growth. Several providers are teaming up with streaming device manufacturers to gain a foothold on the market. For instance, Sharp Corporation has incorporated Roku in its smart TV sets so that customers can personalize the screens of their TV sets and access the Roku channel store. 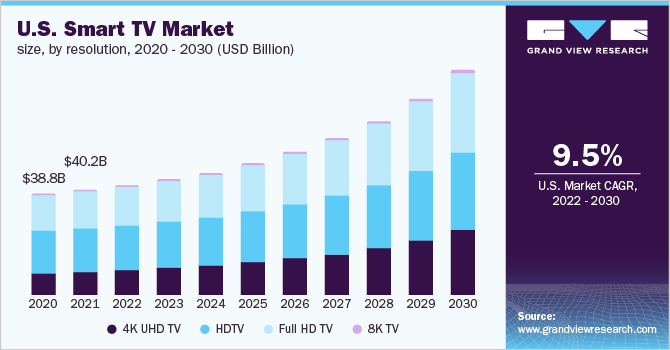 Increased popularity of smart TVs has affected the cable TV market as well as the set-top-box and the conventional television platforms to a certain degree, especially in the developed countries. On the other hand, the growing demand for online streaming has opened opportunities for service providers to venture into the Over the Top (OTT) space and distribute content via the Internet.

Key players are focusing on manufacturing their own LED panels to reduce the resultant cost of the television sets. For instance, Samsung Electronics Co. Ltd. and LG Electronics, Inc. manufacture their own panels to obtain a competitive advantage over their competitors. However, Sony Corporation and Panasonic Corporation procure these panels from LG Display Co., Ltd. and Sharp Corporation. In January 2017, LG Display and Sony Corporation signed a supply contract to provide OLED panels to the latter, leading to fierce competition between OLED and QLED display televisions.

4K smart televisions are gaining traction particularly because of their declining prices. According to Consumer Technology Association (CTA), the sale of these televisions is outpacing that of HDTVs. For instance, LG Electronics, Inc., Samsung Electronics Co., Ltd., and Sony Corporation have adopted the nanotechnology and the quantum dot technology, to improve the picture quality.

In 2017, Samsung Electronics Co., Ltd. introduced a complete line-up of televisions featuring the QLED technology. The upgraded QLED technology can enhance the color accuracy and produce brighter colors with larger color volume. Currently, OLED screens are costlier than QLED screens as they are relatively difficult to produce.

The advent of new display technologies such as QLED and OLED has led to a decline in LCD panel manufacturing. Several manufacturers have already withdrawn the production of LCD panels. For example, in September 2016, Panasonic Corporation discontinued the production of its LCD panels as it was no more profitable for the company.

The plummeting prices and the installation of 4K technology have triggered a shift in the consumers’ screen size preferences. Lured by attractive pricing and features, the consumers are gradually shifting to larger display screens.

The 46 to 55-inch display category is expected to dominate the market. The 4K display technology is recommended for larger TV sets if the customers were to experience the enhanced picture quality. Smaller screen sizes might not be able to represent the improvements in the picture quality delivered by the 4K technology. For instance, to address the growing preference of large-screen displays, Samsung Electronics Co., Ltd. introduced a complete line up of 4K televisions ranging from 55 inches to 85 inches. In January 2017, Sony Corporation launched its line-up of OLED Bravia 4K sets in the sizes of 55 inches, 65 inches, and 77 inches.

A sizeable number of consumers initially planning to purchase 55-inch TV sets do not hesitate to invest further and opt for 65-inch displays on account of the relatively insignificant difference in prices of the two categories. The spending on next-generation large screen televisions is expected to increase in regions such as the Middle East and Asia Pacific.

The flat display segment dominated the industry and raked in a revenue of over USD 127 billion in 2016 globally. The trend can be attributed to high cost of the curved panels. The viewers prefer a flat screen instead of a curved screen as the latter creates a mirror effect, whereby the light shining off the display covers the content. Also, the curvature makes it difficult to mount the TV on the wall.

However, the companies are also focusing on manufacturing curved panels in addition to the flat panels because the curved screens provide more immersive and better viewing angles as compared to their flat counterparts. They also mitigate picture degradation as the viewing angle makes it easier to view more of an image from off to the side. Besides, the vendors have also introduced flexible TVs that can serve as flat as well as curved TVs.

The Asia Pacific region dominated the smart TV market with a revenue share of over 30% in 2016. There is a rise in the regional demand for 4K televisions as customers are choosing UHD TVs due to their sleek design and better image quality. The rising demand for these sets has created opportunities for the content providers to deliver content in better resolution and recording facilities that can support 4K technology.

China dominated the market, supported by the emergence of new entrants such as Hisense Co., Ltd. and TCL Corporation, who made the competition fierce for the major players. A few Chinese brands such as TCL Corporation have also entered the North American region, thereby ensuring a global coverage for these brands. For instance, TCL Corporation partnered with Roku, Inc.to build and distribute a line of co-branded smart TV called TCL Roku TV. Moreover, the company was the official smart TV sponsor in The Ellen DeGeneres Show. It also announced a partnership with UCLA Athletics and became an official sponsor of the Bruins football and basketball teams.

Moreover, manufacturers are launching a complete line-up of smart TVs to compete in the market. For instance, Samsung Electronics Co. Ltd. has its own line of QLEDs while Sony Corporation and LG Electronics, Inc. also have their own series of OLEDs. However, other players, such as Micromax Informatics, TCL Corporation, and Sansui Electric Co., Ltd., are facing a threat from new players foraying into the industry. The products offered by new entrants are cheaper than those offered by major players by approximately USD 32 to USD 156 (depending on the screen size).

This report forecasts revenue growths at global, regional, and country levels and provides an analysis of the industry trends in each of the sub-segments from 2016 to 2025. For the purpose of this study, Grand View Research has segmented the global smart TV market based on resolution, screen size, screen type, and region.

How big is the smart TV market?

What is the smart TV market growth?

Which segment accounted for the largest smart TV market share?

b. The Asia Pacific region dominated the global smart TV market with a revenue share of 37.63% in 2019. This is attributable to the rise in the regional demand for 4K televisions as customers are choosing UHD TVs due to their sleek design and better image quality.

Who are the key players in the smart TV market?

What are the factors driving the smart TV market?

b. Key factors driving the smart TV market growth include an increase in the usage of streaming devices and the internet and the introduction of TV resolutions in 4K, UHD, and 8K.