The global peer-to-peer electric vehicle charging market size was valued at USD 73.3 million in 2019 and is expected to grow at a compound annual growth rate (CAGR) of 21.8% from 2020 to 2027. The growth is driven by the increasing emphasis of Original Equipment Manufacturers (OEMs) on making their EV charging networks open to larger public. Through the use of peer-to-peer (P2P) charging, existing private EV charging infrastructure can be made available to the drivers. 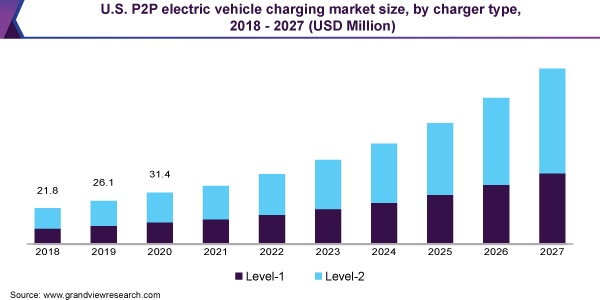 Moreover, with several government initiatives pushing the adoption of electric vehicles, the manufacturers are providing chargers on the purchase of the vehicles. This is subsequently increasing the availability of residential chargers. Various companies such as eMotorWerks and Share&Charge are providing subscription models, wherein station owners are able charge EV drivers for using their chargers. The revenue generated from these charging stations is then shared between the charging service provider and the owner. This is a major factor driving the market growth.

The growth is favored by the growing emphasis of companies such as eMotorWerks and Share&Charge of the establishment of partnerships amongst each other for the development P2P network. For instance, in July 2017, eMotorWerks and Share&Charge established a partnership that aimed at enabling the owners of JuiceNet powered stations to rent out their chargers to EV drivers.

JuiceNet is an EV charging platform in which charging station owner can set up their charging details, including the cost and the hours of operation and charging costs. EV drivers obtain detailed information regarding the availability of charging points through the Share&Charge mobile app. Some of JuiceNet enabled chargers include ClipperCreek HCS-40 and AeroVironment EVSE-RS.

The rise in the number of privately owned EV charging points is a major factor that has fueled the growth of the market. According to the International Energy Agency (IEA), the number of private charging points has risen by 1.6 million from 2017 to 2018. The market growth is favored by various companies such as Blink Charging Co. and Hubject emphasizing on offering eRoaming service to electric vehicle drivers. For instance, Blink Charging Co. entered into a partnership with Hubject to offer roaming service. The eRoaming service enables EV drivers having a subscription of either of the companies to charge their EVs at charge points owned by both.

Several companies, such as ZF Car eWallet GmbH and ZF Friedrichshafen AG, among others, are emphasizing on the development of blockchain transaction platforms for electric vehicle charging that bodes well for the market growth. For instance, in January 2017, ZF Friedrichshafen AG launched a ‘Blockchain Car eWallet’. The eWallet allows EV drivers to pay for charging their EV at private stations.

The incorporation of Blockchain technology into P2P charging will enable EV drivers to check whether they are being overcharged. Furthermore, companies such as eMotorWerks and Share&Charge are focusing on the development of decentralized blockchain system for EV charging. For instance, in January 2019, Share&Charge announced that it is working on the development of decentralized blockchain system that uses Open Charge Point Interface protocol (OCPI) protocol for the peer-to-peer (P2P) connections between charge point operators and service providers.

Various EV manufacturers such as Toyota Motor Corporation and Tesla, Inc., among others, are conducting research and development activities for the integration of P2P and Vehicle-to-Grid (V2G) technology that bodes well for market growth. For instance, in May 2019, Toyota Motor Corporation, in partnership with the University of Tokyo and TRENDE Inc., launched a pilot P2P project for testing the feasibility of P2P trading as an electricity supply system. This system will enable businesses, homes, and electric vehicles to connect to the grid.

The outbreak of the COVID-19 pandemic has resulted in governments globally emphasizing on the implementations of stringent lockdowns. Therefore, this has caused a global economic crisis that is likely to affect the investments towards the development of smart cities, EV charging networks, and various industries and sectors such as automotive, electronics, and power, among others. This factor is likely to impact the growth of the market in the next two years.

The decrease in the production owing to the shortage of lithium-ion cells in countries such as India, Brazil, and U.K., among others, has significantly affected the market growth. Countries such as Australia, China, and Chile are among the largest producers of lithium. As China is the epicenter of the pandemic, various countries have suspended Chinese exports. Furthermore, in countries such as China, Japan, and South Korea, OEMs, including Siemens and Honeywell International, Inc., among others, have large manufacturing facilities that are not operating in full capacity.

In various countries, most of private EV charger owners have closed their units for roaming EV drivers, as the COVID-19 is a contagious disease. This is likely to impact market growth. Furthermore, the demand for EV chargers has lowered in the month of February and March, negatively impacting market growth. In China, the number of public charging stations installed was 15,000 from March 2019 to February 2020, with a year-on-year increase of 52.8 percent for February 2020. However, in February 2020, only 195 stations were installed, due to COVID-19 outbreak.

The Level 2 charging segment dominated the market in 2019 owing to the rise in the adoption of Level 2 chargers among corporate organizations such as GENERAL MOTORS and The Coca-Cola Company. Furthermore, government agencies such as Burlington Electric Department and Municipal Electric Authority of Georgia, among others, are emphasizing on the establishment of partnerships with peer-to-peer EV charging software developers such as EVMATCH, INC. These partnerships are aimed at the development of Level 2 chargers at multi-unit dwellings, which is driving the segment growth.

For instance, in December 2019, the Burlington Electric Department, in partnership with EVMATCH, INC., deployed Level 2 chargers at multi-unit dwelling properties in Burlington city. Under this partnership, the companies aimed at providing the multi-unit dwellings with 15 JuiceBox Pro chargers for free. Additionally, Burlington Electric Department offered an incentive of USD 500 to help cover the installation costs for each charging station to owners if they agree to make it publicly available between 9 am to 5 pm.

Furthermore, various EV manufacturers such as SAIC Motor Corporation Limited and BYD Co Ltd., among others are emphasizing converting residential Level 1 EV charger into the P2P network, further driving the segment growth. For instance, in January 2020, SAIC Motor Corporation Limited established a partnership with PowerShare for converting its customers Level 1 chargers in Shanghai, into P2P chargers. However, the challenge arising out of level 1 charging is that it requires around 8-10 hours for charging an EV is likely to impact the segment growth.

Based on the application, the market has been segmented into residential and commercial, with the residential segment dominating with a share of 61% in 2019. The dominance of the segment can be attributed to the growing emphasis of Original Equipment Manufacturers (OEMs) on the development of residential chargers specific to P2P networks. For instance, in February 2020, Enel X launched its JuiceBox Pro residential EV charger that is Level 2 residential EV charger. JuiceBox Pro is equipped with WiFi connectivity and is compatible Peer-To-Peer network of eMotorWerks.

Various EV charger manufacturers such as ABB, Ltd.; ChargePoint, Inc.; and EVBox are focusing on establishing agreements that favor P2P network expansion, subsequently fueling the market growth. For instance, in December 2018, ChargePoint, Inc. signed a peer-to-peer roaming agreement with EVBox. The agreement will provide roaming EV drivers to access residential chargers from both the companies. 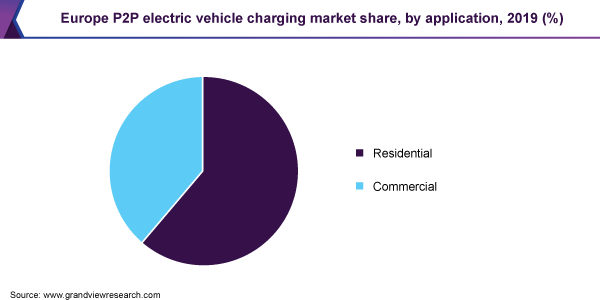 Owing to the rise in the number of contracts provided by the contractors of commercial buildings to utilities for developing P2P networks, the commercial segment is projected to grow at the highest CAGR. For instance, a joint contract was awarded to EVE Australia Pty Ltd. and AGL Energy for the development of a P2P network at various commercial buildings across the Australian cities of Brisbane and Melbourne.

Various government agencies such as Office of Gas and Electricity Markets, European Commission, and Commission for Electricity and Gas Regulation (CREG), among others, are providing funding to companies such as EverCharge, EVgo, and Zap-Map, among others, for developing commercial P2P networks. For instance, in June 2019, the Office of Gas and Electricity Markets (Ofgem) through the Low-Carbon Network Fund awarded funding to Zap-Map for the development of commercial P2P networks.

North America dominated the market with a share of around 38% in 2019, owing to the rise in the number of companies in the region that are operating in the P2P market. For instance, in July 2017, innogy established its U.S. subsidiary innogy e-mobility US LLC that provides electric vehicle supply equipment in North America. The company is also engaged in the development of P2P networks.

In the North America region, there has been a rise in the establishments of standards for P2P EV chargers that have further driven the growth of the regional market. For instance, Open InterCharge Protocol (OICP), which was established in May 2019, is a network communication standard that facilitates roaming for EV drivers enabling them to charge their EVs at private and commercial P2P networks across U.S.

Companies operating in Europe are focusing on collaboration strategies for the development of the P2P network, which bodes well for the growth of the regional market. For instance, in June 2017, Enel X, in partnership with innogy, developed a P2P network in Germany consisting of more than 6,000 charging points across countries such as the Czech Republic, Denmark, France, and Germany, among others.

The European Parliament has hosted various events such as E-Mobility Charging Infrastructure 2019. The event was held in December 2019 that supported R&D programs by European energy companies to discuss the next steps and main challenges for EV charging infrastructure through peer-to-peer networking.

Strategies adopted by some of the key players include high collaborations, mergers, and partnerships for expanding their market share. For instance, in June 2017, Power Hero collaborated with Share&Charge for the development of P2P network in Germany. Furthermore, various companies such as Enel X and EV Meter, among others are emphasizing on expanding regional presence. For instance, in January 2016, Enel X established its subsidiary in San Carlos, U.S. Through, these subsidiaries, Enel X has established P2P partnerships with the regional OEMs,

Some of the other market players are focusing on strategies such as R&D activities and new product launches. For instance, AeroVironment, Inc. invested approximately 30% of its expenses on R&D activities in FY 2019. Furthermore, in December 2018, AeroVironment Inc. launched EVSE-RS, a 32 amp charger that is compatible with the P2P network. Additionally, in February 2020, ClipperCreek, Inc. updated its HCS-40 charger, a Level 2 charger suitable for residential and commercial charging stations. The updated products support P2P EV charging. Some of the prominent players in the peer-to-peer electric vehicle charging market include:

This report forecasts revenue growth at global, regional and country levels, and provides an analysis of the latest industry trends in each of the sub-segments from 2018 to 2027. For the purpose of this study, Grand View Research has segmented the global Peer-to-Peer electric vehicle charging market report based on charger type, application, and region: