The global peptide therapeutics market was valued at USD 21.5 billion in 2016 and is expected to grow at a CAGR of 9.4% over the forecast period. Increasing prevalence of cancer and metabolic disorders such as osteoporosis, obesity, & diabetes are the key factors contributing toward the adoption of peptide therapeutics over the forecast period. The demand for efficient and low-cost drugs is very high due to the growing base of affected pediatric population and prevalence of target diseases in low-income countries.

The growth is directly associated with rising investments in drug discovery. R&D activities in peptide therapeutics are primarily focused on the development of drugs about oncology followed by infectious diseases, metabolic disorders, and diabetes. The presence of a strong product pipeline in this segment is also one of the factors expected to drive market growth soon. Besides, advancements in the processes of manufacturing peptides are expected to enhance the further development of therapeutics. 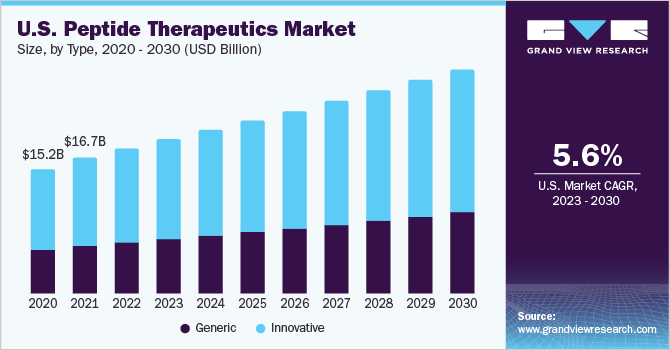 The market is estimated to showcase lucrative growth in the forecast period due to the initiatives undertaken by many companies for investigating the development of new drug candidates. To retain their position in the market, companies engage in extensive R&D initiatives to develop novel drugs exhibiting higher efficiency in the treatment of target diseases. Clinical trials for these drugs have also significantly increased over the past decade. This is also expected to propel growth over the forecast period.

Manufacturers and suppliers are focusing on the adoption of novel technologies for the synthesis of peptides. Improvement in the purification process coupled with automation and less generation of waste is one of the factors contributing toward growth. Besides, the rising adoption of hybrid technology for manufacturing efficient drugs is estimated to boost production over the forecast period.

The cancer segment dominated in 2016 with revenue generation of over USD 1.85 billion. Increasing the prevalence of cancer worldwide and increasing prescription of peptide therapeutics for cancer treatment are the key factors responsible for dominance in this segment.

Increasing demand for efficient and rapid-acting therapeutics is further anticipated to accentuate growth. Increased awareness amongst patients & healthcare professionals regarding adverse effects of chemotherapy and radiation therapy is a high rendering factor for growing focus toward alternative therapeutics such as peptide-based drugs. The aforementioned reason is expected to push cancer as an application with the fastest growth rate. Moreover, the presence of a strong product pipeline is anticipated to affirm progress.

The market is classified based on the type of drugs into generic and innovative drugs. The innovative peptides dominated in 2016 and held a share of around 66.93%, owing to the increasing investments by large pharmaceuticals in R&D for the development of novel drugs and high prescription rates.

However, generics are anticipated to witness lucrative growth over the forecast period. Rising expenditure on healthcare and increasing healthcare expenditure by the federal government is expected to propel the adoption of generics.

The loss of patents of many branded drugs is also estimated as a key factor responsible for the growth of the generics segment. Patent loss is considered as a big opportunity for generic players to enter the market with low-cost alternatives for blockbuster drugs. However, brand loyalty in case of some innovative drugs may impact the segment flourishment

The in-house manufacturing segment held the largest share accounting for over 60.0% in 2016. Most of the key players are involved in developing peptide therapeutics in-house owing to stringent regulations and high cost of outsourcing. As large pharmaceutical companies have proper infrastructure for large-scale production and advanced technology, these companies prefer in-house manufacturing.

The outsourcing activities for manufacturing are also estimated to boom during the forecast period due to difficulties in manufacturing therapeutics with high-quality standards. The companies prefer to outsource the Active Pharmaceutical Ingredient (API) from companies having high-end technology and expertise for manufacturing various types of peptides.

Peptide manufacturing is a complex procedure and it requires advanced technology such as Solid-Phase Peptide Synthesis (SPPS), Liquid-Phase Peptide Synthesis (LPPS), or Hybrid for purification and synthesis of high-quality products, which results into the high cost of manufacturing. Besides, increasing R&D funding and capital investments by key players by entering into strategic agreements is anticipated to result in the market growth over the forecast period.

Patient compliance and acceptability are major advantages of the oral route of drug administration. However, enzymatic degradation that inhibits blood absorption of these drugs holds a major disadvantage. Parenteral route of administration dominated in 2016 with a substantial amount of share. This dominance is attributed mainly to the high adoption rate, faster delivery of drugs, and ease of application.

However, other routes such as intradermal and nasal are expected to grow at a lucrative CAGR of over 14.0% over the forecast period. The bioavailability of the nasal route was found to be over 4.0%, giving it an edge over the oral route. Also, enzymatic degradation of the peptide is avoided by transdermal and nasal route.

The LPPS segment dominated with a share of over 45.0% in 2016 owing to the presence of rising demand for pure peptides for the development of efficient therapeutics. However, issues such as higher consumption of time are responsible for shifting consumers’ preference to faster and effective methods such as SPPS.

SPPS lowers the synthesis time and is used in a wide range of production procedures. Moreover, higher efficiency during the synthesis of longer peptides is another driver for the market. Furthermore, associated automation, scalability, and enhanced control over the physicochemical properties of peptides are expected to drive the market over the forecast period.

Hybrid technology is expected to spearhead growth owing to associated benefits such as compatibility with both liquid-phase synthesis and solid-phase synthesis. Companies are investing in R&D to incorporate the benefits of both LPSS & SPSS and to provide a cost-effective and sustainable solution. Advanced hybrid technology is expected to grow at a lucrative CAGR of over 12.0% owing to a high adoption rate. 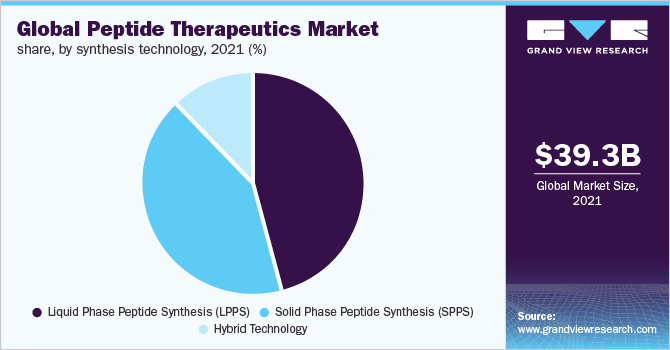 North America dominated the market in 2016. The rise in awareness levels about peptide therapeutics products, increasing demand for diagnostics in cancer & other diseases, and growing biotechnology industry are the factors contributing toward the dominance. Increasing R&D expenditure by the government is also estimated to help peptide therapeutics maintain dominance over the coming years. A well-established biopharmaceutical & pharmaceutical industry in this region is a major factor responsible for growth.

The development of new products and implementing technological advancements are key strategies undertaken by the companies to gain market position. Moreover, increasing collaborations for undertaking trials of new drugs is estimated to increase competitive rivalry. For instance, Cancer Research UK has agreed with Bicycle Therapeutics to fund Phase Ia and Ib clinical trial of drug candidate BT1718, for the treatment of solid tumors.

This report forecasts revenue growth at global, regional & country levels and provides an analysis of the latest trends and opportunities in each of the sub-segments from 2014 to 2025. For this study, Grand View Research has segmented the peptide therapeutics market based on application, type, type of manufacturers, route of administration, synthesis technology, and region: