The global peptide synthesis market size recorded a revenue of USD 379.99 in 2018 and is expected to reach USD 1,011.99 million by 2026 growing at a CAGR of 13.0% during the forecast period. Peptide molecules have gained immense traction in the healthcare as well as the nutrition industry; and several technological advancements have been brought about to perform desired peptide production/synthesis. This trend has been observed concerning enzymatic as well as chemical peptide synthesis.

Chemical synthesis is considered to be a conventional and most widely used technology used for peptide production, however lack of specificity along with the risk of increasing environmental burden is set to hamper the growth of chemical peptide synthesis. This has propelled the adoption of enzymatic technology for the synthesis of peptides. 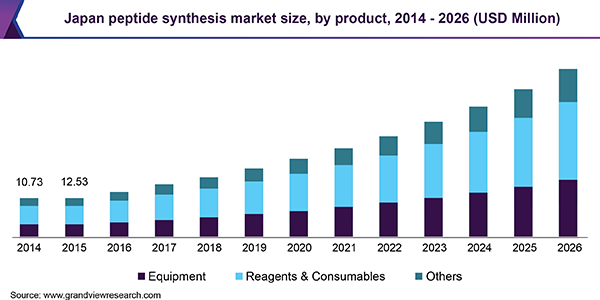 Disadvantages associated with this technology include lesser productivity, expensive biocatalysts, and lack of validation protocols that have imposed challenges for the effective production of peptides via enzymatic methods. Extensive research and innovation focused on developing an apt peptide synthesis technology have resulted in a combinatorial approach inclusive of both enzymatic and chemical synthesis as the benefits of both the technologies can be synergistically utilized.

For instance, in February 2017, researchers at MIT introduced new equipment that enabled faster peptide synthesis as compared to the existing equipment in the market. Researchers at MIT have manufactured an automated machine that can form links between amino acids, in approximately 37 seconds; which assists in producing large quantities of customized peptides in a shorter time duration.

Whereas, reagents and consumables have generated the highest revenue among the other peptide synthesis products; this is attributed to their routine adoption in peptide synthesis protocols. Additionally, recent developments about the peptide coupling reagents are expected to boost the market growth in the coming years.

Advancements along with integrating automation in the liquid and solid-phase peptide synthesis have largely contributed to reducing the costs associated with peptide synthesis. This is expected to increase the adoption of peptide synthesis across the globe contributing to the global revenue generated throughout the forecast period. The conventional study suggests that SPPS serves to be a suitable approach for the GMP manufacturing as well as API process development as SPPS is cost-effective to synthesize long peptide sequences (more than 10 amino acids) with smaller volumes. However, during SPPS the costs associated with purification tend to uplift the manufacturing costs at any desired scale of production.

The therapeutics segment has dominated the peptide synthesis application market in 2018 and is expected to maintain this trend throughout the forecast period. Whereas, diagnosis segment is set to grow at the fastest pace from 209-2026. Synthesized peptides are widely applied across cancer treatment which has made this segment a major contributor to the revenue generated by the therapeutics segment.

Moreover, the metabolic disorders segment is set to grow at the fastest pace throughout the forecast period and this growth is attributed to the presence of a strong pipeline and presence of a high number of peptide candidates for type II diabetes treatment. Newly discovered peptides playing a pivotal role in the metabolic regulations are expected to offer useful insights in designing effective therapeutic approaches. 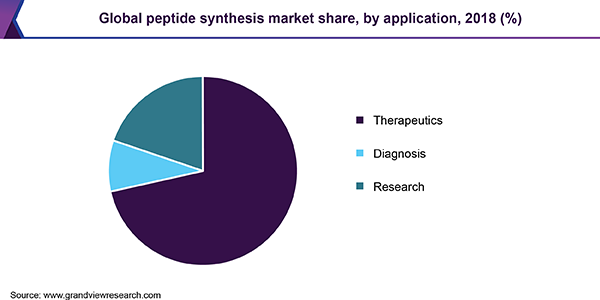 Robust growth of peptide therapeutics industry is a major driving factor for the dominance of pharmaceutical & biotechnology companies’ end-use segment in the global market. Whereas, the CRO & CMO segment has registered the highest growth rate from 2019 - 2026.

The geographic regions North America, Asia Pacific, Asia-Pacific, Latin America, and MEA have witnessed supplemented demand for peptide synthesis techniques across diagnostic, research, and therapeutic applications. Among the aforementioned regions, North America displayed the highest contribution to the global market, attributed to the owing to the robust presence of major market players, increased awareness about available peptide synthesis technologies along with the increasing focus on moving the peptide drugs on a commercial scale.

Whereas, the Asia Pacific is expected to exhibit the fastest growth during the forecast period due to increasing investments by market players in the region, growing awareness about novel peptide treatments, increasing healthcare spending by governments as well as patients, collaborations undertaken by multinational companies with local players for distribution, and rising incidence of chronic diseases in low- and middle-income countries.

Over the years, the market has witnessed a substantial number of consolidations. For example, in January 2018, Imcyse SA announced a research collaboration with Pfizer, Inc., for the development of Imotope, a specifically modified peptide. This peptide was synthesized for the treatment of rheumatoid arthritis. Imcyse SA manufacturers actively targeted immunotherapies for the treatment of chronic diseases.

This report forecasts revenue growth at global, regional, and country levels and provides an analysis of the latest industry trends in each of the sub-segments from 2014 to 2026. For this study, Grand View Research has segmented the global peptide synthesis market report based on the product, technology, application, end-use, and region: