The global pet grooming products market size was estimated at USD 9.9 billion in 2018. Rising pet adoptions and humanization are driving the increasing spending on various pet products such as grooming, accessories, and food. Growing awareness about pet health is a major factor resulting in increasing demand for pet grooming products. In addition, growing trend of organic products, have encouraged manufacturers to introduce organic grooming shampoos and conditioners for pets. This, in turn, is likely to propel the growth of the market over the forecast period.

Over the years, the pet market has been growing significantly with many countries having high rate of pet adoption and increasing animal health spending. People are spending more on the wellbeing of their companion animals as they view them as their family member and are willing to invest to maintain their health. This scenario has led to an increase in the health and grooming expenditure for companion animals. 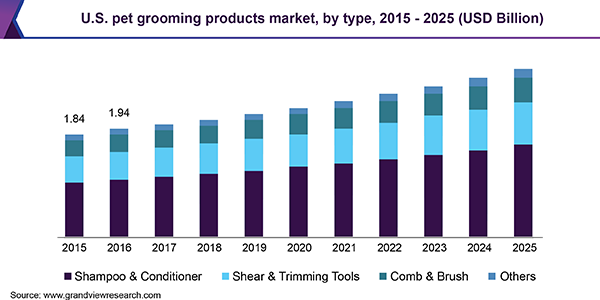 Americans are likely to spend more to take care of their pets. According to a report released by the American Pet Products Association (APPA) in March 2018, the overall spending in the U.S. pet industry increased by 4.1% between 2016 and 2017, from USD 66.75 billion to USD 69.51 billion. The APPA also reported an estimated increase of 3.7% in 2018. It also reported an increase of about 2.7% in spending on pet supplies which includes grooming products along with OTC medicines.

An increasing number of Americans consider their companion animals to be part of the family. Dogs are the most popular type of pets and the adoption rate of dogs worldwide is high. According to the American Society for the Prevention of Cruelty to Animals, approximately 3.3 million dogs enter animal shelters every year. The 2017 - 2018 National Pet Owners Survey conducted by the American Pet Products Association estimates that 60.2 million of households in U.S. own a dog and 89.7 million pets are owned in U.S.

Shampoo and conditioner accounted for the highest share of more than 50% in 2018. The dominance is primarily attributed to basic hygiene need of companion animals. The fact that these grooming products are specially formulated for pet care which serve the purpose of cleaning, conditioning, and deodorizing the skin and hair of companion animals. In addition, manufacturers have also developed medicated shampoos with specific formulations to treat various skin-related problems and diseases in companion animals.

The hairy coating of pets especially dogs and cats often get soiled, due to outdoor movements, which makes them highly prone to infections and bacterial growth caused due to flea and ticks. Medicated and problem specific solutions offered by manufacturers coupled with growing awareness in pet care have driven demand for pet shampoos and conditioners. Some of the popular furry dog breeds that require specialized shampoo and conditioner for grooming include Shih Tzu, Bernese Mountain Dog, Poodle, Golden Retriever, Chow Chow, and Yorkshire Terrier. 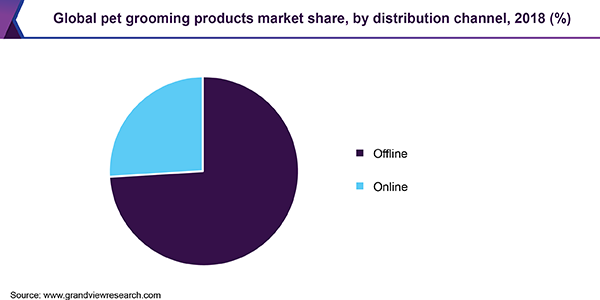 However, growing tech savvy people and their inclination towards online shopping, e-commerce platforms have been gaining popularity with respect to distribution. Apart from the emergence of third party online distributors, this trend has also introduced e-retailers offering quality grooming products to reach out to the large customer base. Some of the third party distributors include Amazon.com; Petco Animal Supplies, Inc.; PetSmart Inc.; PetMed Express, Inc.; TABcom LLC, BarkBox; PetFlow; and Bulk Reef Supply.

North America led the market in 2018, thereby accounting for more than 50% of the global market share majorly driven by high adoption and spending on pet care in U.S. The country has largest number of companion animals in the world. According to APPA, in U.S. more than 65% of the households owned a companion animal in 2018. The adopted companion animals included 90 million dogs and 94 million cats. The pet owners have approximately spent USD 72.1 billion on their pet care in that particular year. In Canada, about 41% households own at least one dog and approximately 38% own at least one cat. The growing adoption of domestic companion animals in these countries is contributing to rising demand for various pet grooming products.

Asia Pacific is expected to witness the fastest CAGR from 2019 to 2025. Major markets contributing to regional growth include China and Japan. Rapid urbanization has been a significant factor accelerating the adoption of companion animals by consumers. As a result, demand for pet grooming shampoo is expected to witness a steady growth over the forecast period.

The companies are engaging in merger and acquisition activities with an aim to expand their business. For instance, in March 2018, BioAdaptives, Inc., a U.S. based natural health products producer acquired Philco Animal Health Inc., which is a Canada based veterinary product company.

This report forecasts revenue growth at global, regional, and country levels and provides an analysis of the latest industry trends in each of the sub-segments from 2015 to 2025. For the purpose of this study, Grand View Research has segmented the global pet grooming products market report on the basis of type, distribution channel, and region: