The global pharmaceutical fine chemicals market size was valued at USD 78.20 billion in 2016. The rising aging population along with rising health consciousness among consumers is expected to propel demand growth over the forecast period.

The global market is characterized by major industry participants focusing on R&D activities. In order, to capture the emerging opportunities in regions, such as Asia Pacific and Central & South America, companies are setting up manufacturing facilities to increase their regional footprint.

Cardiovascular was the largest application segment of the market in 2016. The chemicals are utilized to manufacture medicines & drugs for the treatment of heart and blood vessels diseases. This application segment is expected to have high market penetration and high growth over the forecast period.

Diabetes is one of the most common diseases in the world today. To treat this, individuals living with diabetes are often subjected to a particular diet. This diet often includes products and medicines, which are highly expensive. On account of these factors, the diabetes segment is expected to witness a high growth rate over the forecast period.

There is a high prevalence of neurological disorders due to factors such as genetic disorders, lifestyle, infections, and malnutrition and brain injury. Pharmaceutical companies have developed products that target the nerve imbalance in the body and try to restore normal neurological function. There are various innovative platforms for drug mechanisms developed recently such as glutamate modulators, which have the capability to treat neurological disorders. Such trends have benefited the segment and are expected to do so over the forecast period.

Pharmaceutical fine chemicals can play a decisive role in the treatment of cancers of the brain, lungs, blood, and liver. The companies have developed departments having a focus on the development of specific drugs intended for specific occurrences such as solid tumors and haemato-oncology. Ongoing R & D activities to develop refined products having better performance regarding oncological treatment is also expected to benefit the market demand over the forecast period.

Proprietary drugs emerged as the largest type segment in 2016, and it is expected to continue its dominance over the forecast period. The global share of non-proprietary drugs was 18% in 2016. 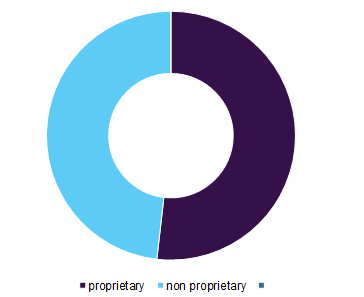 Proprietary drugs are drugs that are protected by patents and have a trading name. Companies strive to develop proprietary drugs for achieving maximum profit share. The industry participants are using technologies to manufacture drugs, which are cost-competitive as well as effective. Most of the pharmaceutical fine chemicals are used as building blocks for proprietary products.

The pharmaceutical fine chemicals used for non-proprietary drug manufacturing is expected to witness significant growth over the forecast period. A non-proprietary or a generic drug is defined as a drug whose patent has expired. They are sold at a relatively lower price than their proprietary counterparts. Rising awareness regarding generic drugs combined with the patent termination of proprietary drugs is expected to benefit the market demand of the segment over the forecast period.

Big molecules held the highest share of the market in 2016, and this trend is expected to continue over the forecast period. These molecules are used in applications such as dipeptides, which are used to treat occurrences of cardiovascular diseases. The application of big molecules in vaccination is also driving the segment demand. Big molecule products have entered the market in the recent past in large numbers as compared to small molecules. Companies have developed small molecules for usages in drug metabolites, drug intermediates, pharmaceutical intermediates, and ingredients.

Basic building blocks is a virtual molecular fragment possessing a reactive functional group. Building blocks include acids, acid chlorides, esters, brominated derivatives, ketones, nitrile derivatives, and heterocyclic compounds among others. These are used to manufacture various drugs to treat a variety of diseases such as cardiovascular, musculoskeletal, and neurological. Companies producing building blocks are focusing more on quality improvement. The broad applicability combined with the strategies adopted by the manufacturers of building blocks is expected to drive segment growth.

North America emerged as the largest consumer in 2016, and the market was valued at USD 29.0 billion in 2016. North America region is characterized by the presence of strict laws and regulations about manufacturing as well as consumption. The claims made by the drug producers regarding the efficacy of their product need to be validated by the proper regulatory agencies before the product launch. The region is also characterized by people having a strong inclination towards preventive healthcare. Also, a wide awareness of drug use is also a key regional characteristic.

Asia Pacific is expected to witness the highest growth rate over the next eight years. High population growth in countries such as China and India coupled with the rising disposable income as well the increasing standard of living is catering to market growth in the region. Rising government healthcare expenditure in the region is also expected to benefit the market demand over the forecast period.

Pharmaceutical fine chemical manufacturers have been adopting various strategies such as new product development, joint ventures, and collaborations. These strategies have been adopted to increase market penetration and cater to changing technological requirements for different end-use applications in their specific regions.

Companies operating in the Asia Pacific region suffered a severe setback due to the strict regulatory checks imposed by the western regulatory agencies. The formidable advantage that the enterprises in the region possess about the lower labor costs and environmental costs are rapidly being offset as both these costs are escalating in the region. The region is characterized by the presence of a large number of small players having in line manufacturing capabilities as compared to their western counterparts.

This report forecasts revenue growth at global, regional & country levels and provides an analysis of the industry trends in each of the sub-segments from 2014 to 2025. For the purpose of this study, Grand View Research has segmented the global pharmaceutical fine chemical market on the basis of application, type, size, product, and region: