The global pharmaceutical robots market size was valued at USD 162.7 million in 2021 and is expected to expand at a compound annual growth rate (CAGR) of 9.2% from 2022 to 2030. The growing need for automation in manufacturing units, coupled with the high costs of new drug discovery, is significantly increasing the demand for robotics in clinical trials, drug discovery, and laboratories for automating the procedures. In addition, key companies are introducing technologically advanced robotic machines, which has further led to the tremendous growth of the market. With rising demands for precision, output, and faster turnaround times, automation and robotics have gained traction in the pharmaceutical industry. Additionally, there are numerous benefits to speed when using robots in the pharmaceutical sector. Pharmaceutical drug inspection will become more and more necessary in Asia Pacific, North America, and Europe. 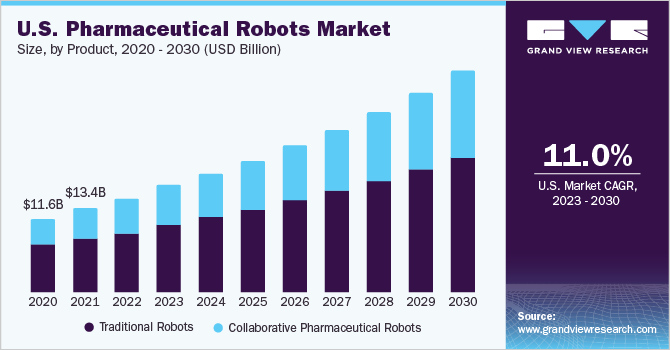 Traditional robots like cartesian, SCARA, and articulated robots will continue to grow significantly over the forecast period, along with collaborative robots. Robots may be utilized 24 hours a day and can-do jobs about three to four times faster than humans can. Robots can also move with an accuracy greater than that of a sheet of paper and much greater than that of a human. Despite high initial investment for installation, the long-term benefits of robots have made them a cost-effective instrument in manufacturing processes, resulting in a higher return on investment (ROI).

These machines are three to four times faster than humans and can operate for 24 hours. With the growing competition in the pharmaceutical industry, drug manufacturers are revolutionizing manufacturing processes with robotic technology. This technology has led to increased manufacturing efficiency and a growing ability to offer quality products at lower costs. These aforementioned factors are expected to raise the demand for pharmaceutical robots for manufacturing processes in the coming years. There is a major demand-supply gap as a result of the coronavirus disease outbreak, which has had a massive impact on the manufacturing industry, as there was a lack of raw materials from Chinese producers.

Due to the logistics sector having been severely hit by lockdown during COVID-19, it is also anticipated that manufacturers may be stranded on raw material orders. Due to a lack of manufacture and supply, all of this has had a negative impact on the industry and caused a slowdown in the market for pharmaceutical robots. On the other hand, the COVID-19 pandemic is encouraging the use of pharmaceutical robots to reduce labor costs, boost in-house manufacturing through automation rather than outsourcing, and overcome manpower shortages to reduce supply chain risks following the COVID-19 pandemic.

The ongoing COVID-19 pandemic has significantly increased awareness regarding the benefits of automation in the pharma sector for maintaining and increasing production without compromising quality or safety. This, in turn, is aiding the market growth. According to the data published by CNBC, in June 2020, the cumulative unemployment rate in the U.S. decreased from 14.7% in April 2020 to 13.3% in May 2020, whereas 30% of manufacturers stated that they are seeking to hire new employees during the COVID-19 pandemic as the overall employment rate in the manufacturing sector is facing a sharp contraction, declining at a rate of 19.1% from January 2020 to April 2020. This is anticipated to drive the demand for these products to overcome labor shortages and expand automation in the country.

With automation becoming central to pharmaceutical manufacturing, maintaining higher levels of accuracy, and minimizing workload, robotics offers the next wave of transformation. Gilead Sciences, a Fortune 500 company, exhibited the high growth potential of the global pharmaceutical industry through its 5-year revenue growth rate of 28.8%. This is expected to increase the need for pharmaceutical robotics to automate tasks and minimize work pressure generated by such growing companies. Furthermore, mergers and acquisitions and collaborative agreements are some of the crucial initiatives being undertaken by key players, which are expected to propel the overall market growth.

For instance, in June 2018, Marchesini Group completed the acquisition of two companies-Schmucker and Creinox. Schmucker, based out of Gorizia, manufactures stick pack packaging machinery for the pharmaceutical, cosmetic, and food industries. In November 2017, ABB and Kawasaki Heavy Industries entered into a joint agreement to share knowledge and expertise and promote the beneficial features of collaborative robots with dual-arm designs.

The traditional robots segment dominated the market and accounted for the largest share of 63.7%. The segment is further divided into articulated, SCARA, delta/parallel, cartesian, and dual-arm robots. Benefits associated with the adoption of these products in various industrial automation applications, including pick and place material handling, loading, and unloading, packaging, palletizing and depalletizing, storing and retrieving, product placement, stacking, cutting, scribing, sorting, process-to-process transferring, and precision spot welding, are positively contributing to segment growth.

The collaborative robot segment is anticipated to witness the fastest growth during the forecast period. These machines are cheaper and easier to handle and maintain in comparison to the traditional solutions. They are also lightweight and require minimum skills to handle, which, in turn, is revolutionizing manufacturing units. They work along with humans, unlike traditional robots that are used to substitute for them. Many pharmaceutical companies have been replacing traditional robots with collaborative robots to increase flexibility and efficiency. For instance, UR3 ROBOT, manufactured by Universal Robots A S., assists in picking and placing, injection molding, and lab analysis.

The picking and packaging segment dominated the market and accounted for the largest share of 54.3% in 2021. The segment is anticipated to witness the fastest growth during the forecast period. Robots facilitate high precision and efficiency as well as help manage material handling challenges. Pick and place allow conservation of floor space due to the need for limited work envelope, thereby leading to optimum utilization of workspace. For instance, Epson RS4, manufactured by Seiko Epson Corporation, is used for picking and packaging in the pharmaceutical industry. Cobots are also widely used for picking and packaging in the pharmaceutical industry owing to the growing need for these applications, coupled with the lack of skilled labor in the market.

A rise in drug discovery and diagnostic testing has led to the high growth of laboratory applications in the pharmaceutical robots market. In addition, laboratory automation through robotic machines minimizes the potential for human contamination. For instance, MYS850L, developed by YASKAWA Europe GmbH, facilitates laboratory automation. Other laboratory applications include vial handling. Robots can handle 10 vials at a time. Thus, pharmaceutical robots used in laboratories help improve the efficiency and quality of the products, with high throughput analysis. As a result, this segment is expected to witness considerable growth in the near future. 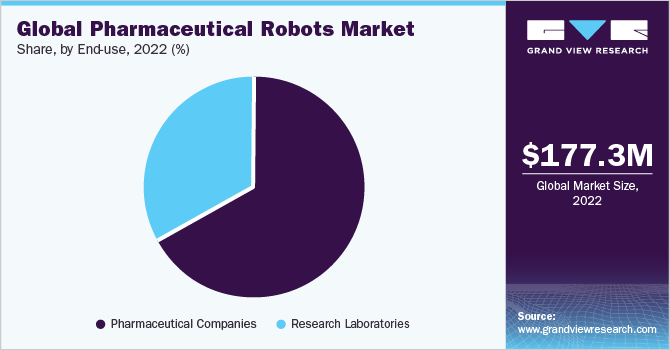 The adoption of pharmaceutical robots is further increasing among research laboratories owing to the increasing usage of robots in these facilities. Laboratory automation has revolutionized the R&D sector and facilitated rapid test analysis. In addition, benefits offered by robots in laboratory applications, such as higher consistency, better record-keeping, product integrity, and traceability, a rise in demand for efficient workflow management in research laboratories, and the rise in the number of initiatives being undertaken by private and public players to promote automation are among the key factors boosting the adoption of pharmaceutical robots solutions, thereby aiding the market growth.

Asia Pacific accounted for the largest share of around 67.0% in 2021 and is anticipated to witness the fastest growth during the forecast period. This is attributed to the presence of a large number of local pharmaceutical companies in countries, such as Japan. In addition, in 2019, China was the largest market for industrial robots, according to the International Federation of Robotics (IFR). According to an article published by Robotics and Automation in October 2020, China accounted for the largest share (140,500 units) of industrial robot installations around the world. This was mainly the result of a considerable increase in sales in China. Thus, leading pharmaceutical companies with vast manufacturing units in these countries are expected to propel the growth of this regional market.

The growth of the market in North America can be attributed to a large number of robot installations in the region. According to the IFR, 33,000 industrial robots were sold in the U.S. in 2017. Hence, North America has a significantly high penetration of pharmaceutical robots, and this number is expected to grow in the near future due to a rise in the number of pharmaceutical companies in the country. The IFR also stated that North America is in the process of strengthening its pharmaceutical manufacturing units to compete with the global market through the automation of its production facilities.

Increasing investments in R&D, geographic expansions, collaborations with other industry players, and product differentiation are among the key strategies adopted by the companies to gain a competitive edge in the market. For instance, in July 2018, FANUC America Corporation announced the expansion of its headquarters with the construction of a new facility in Auburn Hills, MI. The new facility was used for product development, manufacturing, engineering, and warehousing. Some of the prominent players in the pharmaceutical robots market include:

This report forecasts revenue growth at the global, regional, and country levels and provides an analysis of the latest industry trends in each of the sub-segments from 2017 to 2030. For this study, Grand View Research, Inc. has segmented the global pharmaceutical robots market report based on product, application, end-use, and region:

How big is the pharmaceutical robots market?

What is the pharmaceutical robots market growth?

Which segment accounted for the largest pharmaceutical robots market share?

b. Traditional Robots dominated the pharmaceutical robots market with a share of 63.7% in 2021. This is attributable to increased awareness about these machines and rising usage for different applications.

Who are the key players in the pharmaceutical robots market?

What are the factors driving the pharmaceutical robots market?

b. Key factors that are driving the pharmaceutical robots market growth include the rise in R&D investment by global pharmaceutical companies, the introduction of technologically advanced products, and a significant need for the reduction of production cost.