THE global PVP market is expected to witness significant growth in the cosmetics industry owing to its rising demand for manufacturing hair care products. Growing demand for PVP in manufacturing shampoo, conditioners, hair sprays, mousses, and hair dyes is expected to drive the industry growth over the projected period. In addition, superior properties exhibited by the product including excellent film-forming, anti-microbial, moisture-holding, and non-allergic properties offered by the polymer are anticipated to be the key factors driving the industry growth. Furthermore, rising use of the product in manufacturing nail enamels, lipsticks, skin creams, sunscreen, and mascara are likely to propel PVP demand over the next eight years. 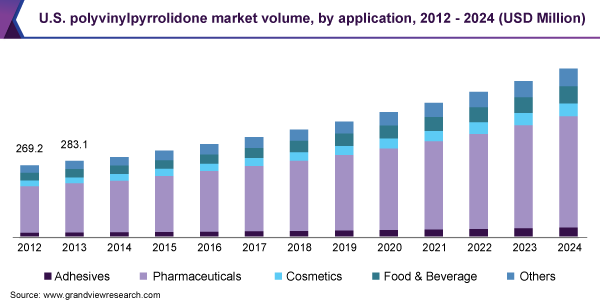 Increasing demand for polyvinylpyrrolidone in brew beverages as a stabilizer is expected to propel demand over the forecast period. Furthermore, rising application scope of PVP in various non-alcoholic drinks such as vinegar, tea drinks, and fruit juices is anticipated to drive the market.

Polyvinylpyrrolidone market is segmented on a regional level in terms of volume (Kilo Tons ) and revenue (USD million) where 2015 has been considered as the base year with a forecast period of seven years between 2016 and 2024. The regional segmentation includes North America, Europe, Japan, Asia Pacific, Latin America, and Middle East and Africa.

Increasing demand for polyvinylpyrrolidone for manufacturing adhesives is expected to be a major driver for market growth. The product offers special cohesive property, which makes it an excellent binder for various surfaces such as metal, plastic, glass fabric surface, and paper. The good dispersion stability, low toxicity, excellent bonding strength, and thixotropy offered by PVP are anticipated to have a positive impact on the growth in adhesive applications. Rising demand for manufacturing inks, polishing agents, glaze sintered materials and paints is expected to propel growth over the forecast period.

The product is used in manufacturing various drugs including paracetamol, aspirin, dimethyl tetracycline, benzene sulfonamide, and dipyridamole. Polyvinylpyrrolidone plays an important role in ophthalmic medicines and injections. Application of the polymer in ophthalmic solutions reduces irritation of eyes and prolongs their role time, thus promoting its use in the pharmaceutical industry over the next eight years. 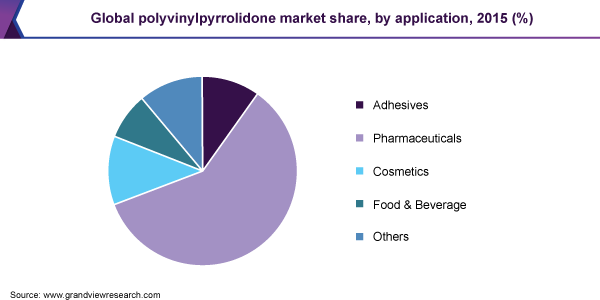 Food & beverage is expected to witness above-average growth, growing at over 8.0% from 2016 to 2024. Increasing use polyvinylpyrrolidone in beverage manufacturing particularly, wine production as a clarifying agent is expected to be a key factor driving the market growth.

The product has wide application scope in manufacturing non-alcoholic beverages such as juices, tea drinks, soy sauce, and vinegar. Growing use of polyvinylpyrrolidone for improving solid food structure and flavor is likely to have a positive impact on market growth over the next eight years.

North America is expected to be a key market for PVP, particularly in pharmaceutical applications owing to the mature healthcare sector in the region. The presence of major pharmaceutical companies including Gilead Sciences, Johnson & Johnson, Pfizer, Actavis, and Merck & Co. in the U.S. is expected to have a positive impact on industry growth. The U.S. Food and Drug Administration (FDA) has approved the use of PVP as a food additive for human consumption, which is likely to have a positive impact on growth.

Asia-Pacific is expected to witness significant growth, growing at a CAGR of over 8.0% from 2016 to 2024 in polyvinylpyrrolidone market owing to emerging end-use industries including pharmaceutical, agrochemical, and cosmetics. Growing adhesives industry in the region is expected to be a key factor driving the demand over the projected period.

Rapid industrialization in countries including China, Korea, Japan, Thailand, and India is expected to boost adhesives demand in construction and automotive applications, which in turn are anticipated to propel polyvinylpyrrolidone consumption over the forecast period.

Changing consumer lifestyle coupled with increasing disposable income in the region is likely to spur demand for alcoholic beverages such as wine and functional beverages including sports drinks and juices, which is likely to open new avenues for the product market over the next eight years.

The global polyvinylpyrrolidone industry has numerous players, however, is dominated by a few major manufacturers including Ashland Inc., BASF SE, and Nippon Shokubai Co. Ltd. Germany-based BASF SE offers a wide range of PVP products with different molecular weights, which are primarily targeted for pharmaceutical, cosmetics, adhesives, and textile applications.

In January 2015, BASF planned to invest over USD 65 million in expanding production by 6000 tons as well as improving production at its PVP manufacturing facilities in Germany and the U.S. In addition, the company plans to add PVP production at its Shanghai facility in order expand its product portfolio in Asia Pacific. China-based JH Nanhang Life Sciences Co. Ltd. is a key manufacturer in the PVP market with a production capacity of 5000 tons/annum. The company has signed a five-year agreement with leading chemical distributor, C Univar, to distribute PVP products to the personal care, pharmaceutical, and food & beverage industry.