The global power rental systems market size was valued at USD 20.8 billion in 2019 and is expected to grow at a compound annual growth rate (CAGR) of 5.8% from 2020 to 2027. Growing electricity consumption for commercial and industrial applications has assembled a supply-demand gap in the power market. This slit is even more obvious during the peak hours for power consumption. This has directed to the expansion of power rental systems, which are proficient in providing provisional electricity at times of the low supply of power. Furthermore, the growing demand for momentary electricity supply sources at times of festivals, events, and fairs is expected to boost the growth of this market in the upcoming years. Additionally, these power systems deliver a peak shaving, which permits various industries to allot their power load consistently during non-peak and peak hours. 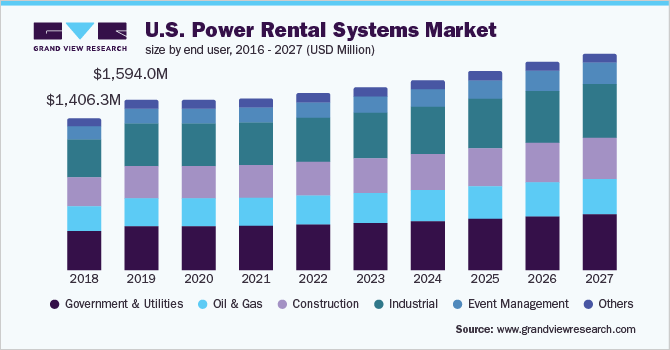 Besides, these systems act as a stand-in power supply in periods of unintended power losses. Incentives and schemes by the government authorities, including feed-in-tariff, in the Asia Pacific, and North America are expected to fuel the demand for DEG systems. Schemes introduced by the government are targeting to endorse the installation of such rental systems across industrial, commercial, and residential applications. These systems can also be worked off-grid as well as on-grid reliant on their locations as well as the applications. Several benefits of distributed energy generation over conventional sources of power generation are expected to drive the market.

The U.S. market is anticipated to expand at a CAGR of 3.1% from 2020 to 2027. Innovative product development by using advanced technologies is expected to create potential revenue opportunities for players operating in the market during the forecast period. The implementation of policies for carbon emission control in the country is likely to enhance the demand for power rental systems.

Peak shaving is expected to be a major trend for the application of power rental systems owing to rising awareness to curb electricity consumption throughout peak hours. Strict regulatory policies are executed by authorities, including EPA, NRDC, and EC. High focus on carbon emission control in several countries, including India, Germany, and the U.S., is anticipated to constrict the demand for such systems over the forecast period.

Owing to the unexpected onset of macro factors including the COVID-19 outrage, the market has been meticulously affected by the existing developments. Increasing ecological apprehensions are likely to detain the growth of the global market over the projected timeline.

The government and utility segment held the largest share of 25.4% in 2019. The usage of power rental systems helps these industries distribute power loads between peak and non-peak hours, thereby reducing the electrical power cost considerably.

The oil and gas segment is expected to expand at a CAGR of 6.0% from 2020 to 2027 as it is one of the largest consumers of power across the globe. The usage of power rental systems supports industries to allocate power loads at times between non-peak and peak hours, thereby reducing the electric power cost substantially. Furthermore, the growing oil and gas industry in the Asia Pacific and the Middle East, coupled with the supply and demand gap in the power sector, is likely to boost the segment growth.

Industrial development in emerging countries of the APAC region, particularly in India, China, and Japan, is anticipated to boost the demand for power rental systems in the industrial sector, which ultimately drives the market. Leading companies have moved their manufacturing activities to MEA and APAC regions, which has significantly increased their power demand leading to a supply-demand gap. The construction sector also emerged as a major consumer of power rental units owing to the continuous demand for high power.

The continuous power application segment held the largest share of 46.1% in 2019 and is projected to grow at a significant rate during the forecast period. Power rental systems are progressively finding applications in the oil and gas, construction, and mining sectors. Such sectors generally require a constant supply of electricity as they are far-off from the power grid areas. Some of the renewable and hydroelectric power plants also require an add-on backup power solution. Telecommunication centers, government offices, and hospitals require UPS, thus fueling up the growth of the continuous power application segment.

The peak shaving application segment is expected to expand at a CAGR of 6.4% from 2020 to 2027. Peak saving method is to cut power bills by limiting the electricity consumption during peak hours as power rates are costly. Power rental systems aid in curbing the electricity demand at the time of seasonal hours, which is supporting to lessen the power billing costs. 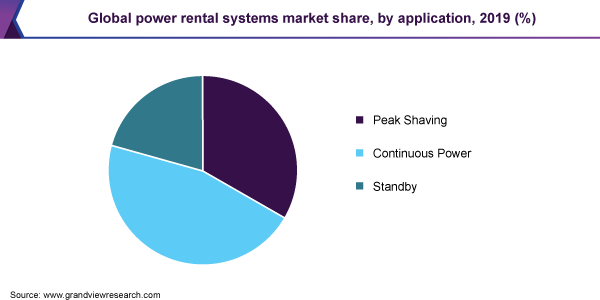 The main goal of the peak shaving application is to evade the obligation of permanent installation to source out peaks of higher load capacities. Commercial and industrial clients use peak shaving to save utility bills by reducing the peak demand. Power demand increases during summer and winter seasonal peak hours. Hence, peak shaving power rental system demand is expected to rise with increasing alertness to control penalized power bills.

Standby mode consumes up to 25% electricity as compared to the active power mode. The growing IT industry, data centers, and augmented use of electrical appliances that normally work in standby mode are anticipated to drive the standby power application segment in the forecast period. Nevertheless, various regulations executed by Greenpeace and the EPA are projected to curtail standby mode electricity consumption, thereby hindering the demand for rental power systems.

Asia Pacific held the largest share of 35.5% in 2019. The region is likely to grow at a significant rate over the forecast period owing to the growing awareness of electricity consumption across emerging countries and industrial applications in countries, like China and India. The APAC market is anticipated to witness higher potential growth in the future owing to decreasing ownership demand for power generation systems and increasing demand for continuous power applications from the utility and construction sector.

The market is estimated to grow significantly in regions, like North America, trailed by Europe, in terms of revenue, owing to the growing demand for power rental systems by the end-user segments in numerous countries across these regions. The market across the Middle East and Africa region is projected to witness substantial growth in the coming years due to its collective demand for power rental units in the oil and gas, construction, and industrial sectors across the countries, such as Qatar, Saudi Arabia, Iraq, and UAE. The market in the Middle East and Africa was valued at USD 1,286.5 million in 2019.

Lack of consistent power supply from the grids, mainly to islands, wherein power demand has grown significantly over a year, is likely to keep the market projections optimistic. Power infrastructure in countries such as the Philippines, Indonesia, and Vietnam is expected to sustain the product demand over the coming years.

North America is one of the pioneers of the market. The American Rental Association (ARA) regulates the rental policies and also assists in the development of the rental industry. The region is expected to witness significant growth in the years to come on account of growing consciousness among end-users regarding rental benefits, such as accessibility of additional capital for core activities and abridged equipment obsolescence. However, mature market conditions of the region, coupled with the unfavorable economic climate, are expected to hamper the growth of the power rental industry.

The market is ascetically concentrated with major five companies that accounted for over 50% share in the market in 2019. Tailored product offerings based on customer specifications is a robust trend in the industry, with many industry players looking to attain and hold market share through strategic alliances and long-term partnerships. Eminent industry players are focusing on escalating their product range and are offering an attractive range of power rental systems to gain a competitive edge in the market. Market players are putting emphasis on backward integration and economies of scale for maintaining the standard quality of the product. These industry participants have adopted numerous inorganic and organic growth tactics for escalating their presence in various countries. Some of the prominent players in the power rental systems market include :

This report forecasts revenue growth at the global, regional, and country levels and provides an analysis of the latest industry trends and opportunities in each of the sub-segments from 2016 to 2027. Grand View Research has segmented the global power rental systems market report on the basis of end-user, application, and region:

How big is the power rental systems market?

What is the power rental systems market growth?

b. The continuous power segment accounted for a revenue share of 46.1% in the global power rental systems market in 2019. Power rental systems are progressively finding applications in the oil and gas, construction, and mining sectors. Such sectors generally require a constant supply of electricity and which are far-off from the power grid areas.

Who are the key players in power rental systems market?

What are the factors driving the power rental systems market?

b. Key factors driving the power rental systems market growth include growing electricity consumption for commercial and industrial applications that have assembled a supply-demand gap in the power market. This slit is even more obvious during the peak hours for power consumption. This has directed to the expansion of power rental systems, which are proficient in providing provisional electricity at times of the low supply of power.