The global precision gearbox market size was valued at USD 2.47 billion in 2019 and is expected to grow at a compound annual growth rate (CAGR) of 9.1% over the forecast period. Rising demand for automation to improve productivity, energy efficiency, and to lower labor costs is anticipated to stimulate market growth over the coming years. Precision gearboxes are widely utilized in machines and systems for automating several processes. Automation minimizes the degree of manual operation and ensures minimum human intervention, which, in turn, is expected to benefit sparsely populated regions or countries with a less skilled labor force. Therefore, the demand for such automated machines and systems is likely to have a positive impact on market growth over the coming years. 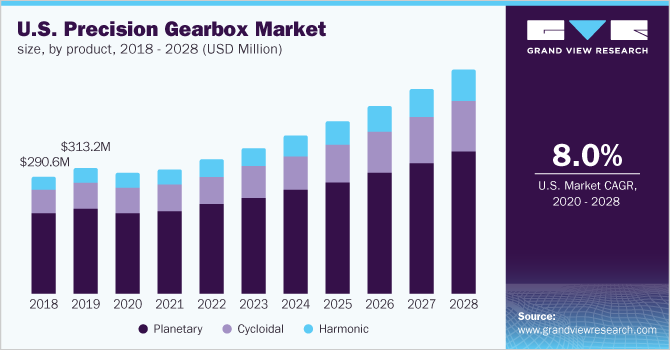 The deployment of robots as a response to COVID-19 was rapid in the U.S. According to a recent paper by economists of Boston University and MIT, this pandemic has created a strong need for automation. The drive to replace humans with machinery accelerated over the last few months in the medical, pharma, plastics & rubber industries as companies struggled to avoid workplace infections of COVID-19 in the U.S.

According to the International Federation of Robotics (IFR) estimates, materials handling operations, automotive, electrical & electronics, welding & soldering, and assembling were the largest end-users of stand-alone robots in 2018. In addition, the U.S., Germany, Japan, South Korea, and China contributed more than 70% of the stand-alone industrial robots’ market demand and production worldwide in 2018.

Over the last decade, industrial automation has increasingly been adopted as a full substitution of labor. The novel coronavirus pandemic along with the possibility of the occurrence of future pandemics has accelerated the implementation and development of automation technologies to minimize human contact. This, in turn, is expected to augment the demand for precision gearboxes over the forecast period.

Precision gearboxes are used in a wide range of aircraft, spacecraft, and land-based defense vehicles & systems owing to their high precision, efficiency, power density, and tolerance. According to the Stockholm International Peace Research Institute (SIPRI), the world military expenditure saw an increase of 2.7% between 2018 and 2019. Rapidly expanding military & aerospace industries coupled with increasing military expenditure is expected to stimulate market growth over the forecast period.

The in-line segment accounted for the largest market share of more than 51% in 2019 and is expected to register a steady CAGR over the forecast period owing to lower backlash and higher torque output of these products than right-angle gearheads. In addition, in-line gearheads are economical and can withstand extreme temperatures and harsh washdowns.

In-line gears offer high energy savings, low noise, low vibration, and high overload capacity. These gearboxes are usually used in servo applications; however, they can be easily integrated into existing drive trains as well. However, they are bulky and expensive to install for longer distances because of their stiffness and thickness and need to be grounded to limit interference.

The right-angle segment is estimated to register the fastest CAGR from 2020 to 2027. These gears are often used for applications that require the driven equipment to be closer to the driving equipment. These are usually used in crushing or mixing applications, wherein the gear drive is mounted below or above the equipment.

The planetary gearboxes segment led the global market in 2019 and accounted for a revenue share of over 69%. The segment is expected to maintain its dominance over the forecast period owing to lower weight, compact size, high power density, modular arrangements, high efficiency, 9:1 ratio per stage, low backlash, and longer gear life of these products. The planetary gearboxes have applications in machine tools, cranes, and lifts. Bevel gearboxes are used in power plants, automotive, and steel plant industries on account of the ease of changing the operating angle by increasing or decreasing the ratio of teeth between the driven wheels and drive. Helical gearboxes provide smooth and quiet operations and are prominently used in cutters, elevators, and industrial equipment that are used in the oil industry. 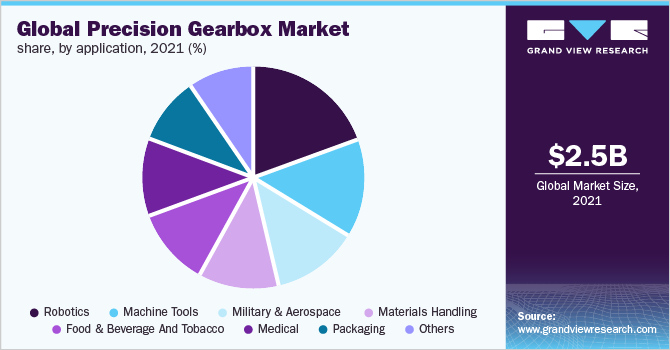 Helical gearboxes can transmit power and motion between both right-angle and parallel shafts. In addition, they are ideal for high-load applications as their load is distributed across several teeth resulting in less wear. Spur gears are the simplest form of precision gears and are highly reliable and offer a constant velocity ratio. They are generally used in applications that require torque multiplication and speed reduction. Moreover, they are more efficient compared to helical gears as they can easily be used to transmit a large amount of power. However, they cannot transfer power between non-parallel shafts and cannot be used for power transmission over long distances.

Robotics was the largest application segment in 2019 and accounted for a revenue share of over 19%. Robotics offers several benefits including higher throughput rates, greater precision & consistency, and minimization of scrap & waste. These benefits have encouraged a wide range of industries such as food & beverage, medical, packaging, and materials handling to incorporate industrial robots, which, in turn, has increased the demand for precision gearbox in recent years.

Pick and place robots are widely utilized in various industries owing to their ability to speed up the process of picking up objects and placing them in new locations, thereby increasing the production rates. Moreover, they offer flexibility as their arms can be replaced & positioned for different jobs and the systems can be reprogrammed accordingly. The rising demand for automated assembly lines is expected to fuel market growth over the coming years.

The packaging application is also estimated to register a significant growth rate from 2020 to 2027. Several complex processes take place on the packaging lines. For instance, on a bottling line, multiple processes, such as filling, capping, and labeling takes place and requires a high level of precision, reliability, and dynamics. Thus, precision gearboxes play an important role in carrying out these complex processes, which is likely to augment their utilization in the packaging machinery industry over the forecast period.

The machine tools segment is among the largest applications due to the high demand for metal cutting computerized numerical control machines and flexible manufacturing systems. These machines require extreme precision and accuracy for manufacturing different components and any inaccuracies can leave the workpiece redundant, thereby increasing wastage and production costs. To avoid this, precision gearboxes are widely utilized in the construction of these machine tools.

Asia Pacific was the largest regional market in 2019 and held over 41% of the total revenue share. The cost of both computer numerical controllers and robots has declined significantly in the last 10 years, which has led to a shorter payback time for the manufacturing equipment. The labor costs in Asia Pacific have been increasing at a rate of 10 to 15% over the past decade, which has led to an increase in the number of manufacturing companies opting for automation, resulting in an increased demand for precision gearboxes in recent years.

The labor cost increase in China has been severe, where a shortage of labor is causing difficulties for labor-intensive industries. As a result, companies are automating their production lines to cope up with the shortage of skilled laborers. The rising adoption of automation in the industrial sector in developed economies is also expected to create opportunities for market players over the forecast period.

Rising investments across industries to decrease production costs are expected to boost the adoption of industrial robots. In addition, improved capabilities of robots, reinforcing safety increase, decreasing prices, and production flexibility offered by robots are anticipated to attract several labor-intensive countries, such as India, to invest in automation technologies, thereby creating opportunities for product manufacturers over the coming years.

According to the U.S. International Trade Administration, Germany has become Europe’s largest exporter of automation equipment and has surpassed the U.S. as the second-largest in the world. Countries, such as France, Italy, and Switzerland, are also moving towards automation owing to the unavailability of skilled labor and rising workplace accidents.

Several manufacturers offer standard precision gearboxes in different parameters including size, torque range, gear ratio, and backlash among others. They also offer customization of these products in line with the customer or application requirements. Many manufacturers are also engaged in R&D activities to develop highly innovative products.

For instance, in 2019, Wittenstein SE developed smart gearboxes with cynapse features that consist of integrated sensors capable of recording and storing different types of information, such as vibration, temperature, mounting positions, and operating hours. Rising adoption of automation in end-use industries owing to the increase in the number of COVID-19 cases is expected to create opportunities for manufacturers over the coming years. Some prominent players in the precision gearbox market include:

This report forecasts revenue growth at global, regional, and country levels and provides an analysis of the latest industry trends in each of the sub-segments from 2016 to 2027. For the purpose of this study, Grand View Research has segmented the global precision gearbox market report on the basis of the axis of orientation, gear technology, application, and region:

How big is the precision gearbox market?

What is the precision gearbox market growth?

Which segment accounted for the largest precision gearbox market share?

b. Asia Pacific dominated the precision gearbox market with a share of 41.6% in 2019, owing to rising demand for automation systems in China, Japan, and South Korea.

Who are the key players in precision gearbox market?

What are the factors driving the precision gearbox market?

b. The global precision gearbox market is expected to be driven by rising product demand from several end-use applications coupled with increasing demand for automation and robotics and technological advancements in order to improve energy efficiency.