The global precision guided munition market size was estimated at USD 33.67 billion in 2021 and is expected to grow at a compound annual growth rate (CAGR) of 5.6% from 2022 to 2030. Enhancements in military operations and the adoption of advanced war techniques are anticipated to support the market growth in the projected time. Moreover, security measures across the globe are likely to increase the penetration of precision-guided munition. Political and territorial conflicts between major economies have increased the precautionary measures for tactical and military operations. Defense systems in the major economies are focusing on the procurement of advanced war equipment with precise operations. Thus, are likely to have a positive impact on the market over the forecast period. 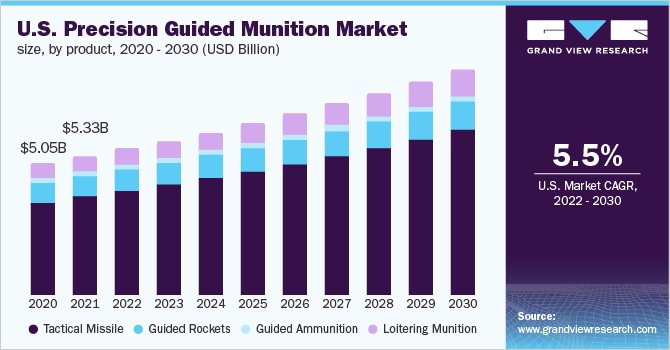 In the U.S., the market stood at USD 5.33 billion in 2021 and is anticipated to accelerate at a significant growth rate during the estimated period. Ongoing conflicts between the U.S. and Iran are anticipated to increase defense spending in the coming period, this is likely to influence the market for guided war equipment over the forecast period. Leading militaries across the globe are focusing on the procurement of advanced warfare equipment to maintain their dominance. Thus, the demand for precision-guided missiles, rockets, and mortars is expected to rise. In addition, the adoption of advanced positioning systems in nuclear warheads is expected to support the market growth.

Enhancements in the defense systems to tackle war-like situations and the need for the protection of territory have influenced major countries to deploy advanced defense and attacking systems. Increasing security measures for guarding activities are likely to drive the market for guided war munition over the forecast period. Advancements in positioning system technology including semi-active lasers, radar homing, Inertial Navigation System (INS), and Global Positioning System (GPS) have influenced the market growth. Furthermore, the compatibility of the positioning systems with nuclear warheads in missiles is likely to accelerate its penetration in the munition.

The tactical missiles segment led the market and accounted for more than 70.5% share of the global revenue. This trend is attributed to tactical missiles’ long-range travel and ability to damage the targets significantly. These missiles can be installed with nuclear warheads coupled with navigation systems and can be launched from surface and air to destroy the targets at desired locations. Thus, are likely to support the market in the estimated time. Guided rockets are anticipated to witness moderate growth in the estimated time owing to their low cost and lightweight properties. However, limited or short-range travel by the rockets is anticipated to pose a challenge for the segment growth.

Developments in the guided systems in rockets are expected to increase its penetration in the market during the projected time. The loitering munition product category is anticipated to accelerate at a significant rate owing to its unique feature of loitering around the target and hitting at a precise location. Moreover, low weight and partially automated mechanisms in the components without human intervention are likely to have a positive impact on its accelerating penetration in the market. Guided ammunition including bombs, bullets, mortars, artillery shells is anticipated to grow moderately in the coming period owing to less adoption in the defense systems. Short-range and less destruction at the target location is expected to pose challenging factors for the segment growth over the estimated period.

The Global Positioning System (GPS) segment accounted for the maximum share of more than 70.5% of the global revenue in 2021. The semi-active laser guidance technology segment followed the GPS segment in 2021 due to the high demand. The technology is used for locating the targets. Fast coordination by illuminating the target for aerial attack is the primary factor for its growing demand for guided weapons. However, semi-active laser guidance for war weapons is likely to be replaced by GPS technology in the estimated time. Detection of exact target location with the provision of real-time movement of the targets is likely to increase the popularity of GPS-enabled guided munition for war activities at long range. 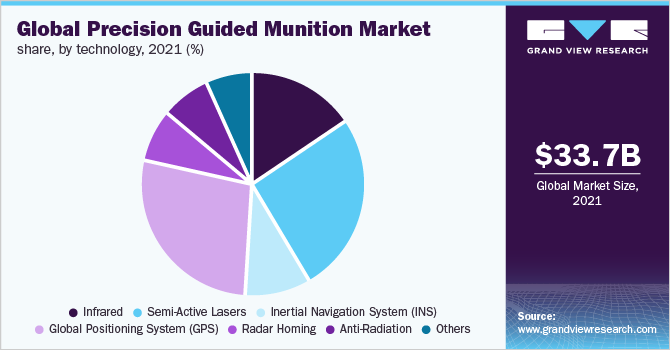 The infrared-enabled guided munition is expected to grow at a significant rate owing to its low cost and precise location detection. Infrared components attached to the war equipment occupy less space and are light in weight, thus are widely installed in missiles, rockets, and artillery. However, enhanced accuracy and precision offered by the counterparts are expected to hamper the demand to some extent. Radar homing guidance systems are majorly used for missile guidance that allows missiles to locate the targets autonomously. These systems are attached with radar transceivers and necessary electronics that simplify their locating operations. This guidance system is popular in tactical ballistic missiles.

Asia Pacific dominated the global market in 2021 with a revenue share of more than 31%. The region is anticipated to continue the same trend growing at the fastest CAGR over the forecast period. China, South Korea, India, North Korea, Pakistan, and Japan are among the largest players ordering tactical warfare. The growing tensions between the countries in the region and the need to strengthen the defense capabilities are likely to create scope for the precision-guided munition. The growing tension between India and Pakistan has led India to strengthen its defense capabilities with the addition of enhanced missiles including Prithvi, Agni, Brahmos, and others. Technological developments and collaborations with foreign defense departments for modern war equipment are projected to increase the penetration of guided weapons.

The ongoing conflict between Iran and the U.S. has led to the enhancements in the military operation of the respective countries, thus the demand for the products is likely to increase in the estimated time. Strong R&D by the U.S. military has developed long-range missiles and rockets with precision to hit the targets autonomously.The presence of prominent manufacturers in Europe coupled with high investments in the military operation by economies including the U.K., Germany, France, Italy, and Russia are anticipated to upscale the market in Europe. Moreover, military developments in Russia are further likely to develop improved artillery and missiles, thus, is expected to have a positive impact on the regional market.

The global market is highly competitive due to the strong presence of a few global companies. Prominent players, in collaboration with major defense organizations across the globe, are investing heavily in R&D activities to develop precision-guided equipment. In February 2019, BAE Systems inked a contract with the U.S. Navy worth USD 114.5 million to enhance the guided-missile destroyer, USS Bulkeley (DDG 84) in its Norfolk shipyard. In January 2019, a 2100 F-Model missiles contract was awarded to Javelin, a joint venture company of Lockheed Martin and Raytheon. Some prominent players in the global precision guided munition market include:

This report forecasts revenue growth at global, regional, and country levels and provides an analysis of the latest industry trends in each of the sub-segments from 2017 to 2030. For the purpose of this study, Grand View Research has segmented the global precision guided munition market report on the basis of product, technology, and region:

Who are the key players in precision guided munition market?

What are the factors driving the precision guided munition market?

b. Key factors driving the precision guided munition market growth include rising demand for advanced technology war weapons that can accurately hit the targets without human intervention. Moreover, increasing military expenses and the adoption of advanced equipment are likely to drive the market.

How big is the precision guided munition market?

What is the precision guided munition market growth?

b. Asia Pacific dominated the precision guided munition market with the highest share of 31.11% in 2021. This is attributable to rising investments in defense activities by China, India, South Korea, and Japan