The global preclinical CRO market size was valued at USD 3.25 billion in 2016 and is expected to grow at a CAGR of 8.3% during the forecast period. Increase in focus of life science companies on their core competencies coupled with rise in outsourcing of noncore functions is further expected to contribute to the growth of preclinical CROs market. There has been a significant rise in R&D budget for early stage and late-stage drug development processes, which is further expected to contribute to the market growth. 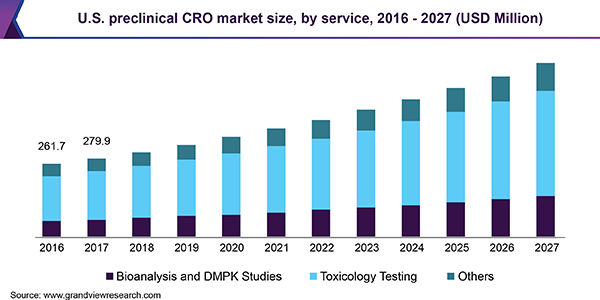 The rise in competency of these CROs is also contributing to the growing demand for preclinical services by life science companies, as these clients are adopting strategic partnerships business model and outsourcing preclinical services to CROs. The pressure to contain R&D cost and decrease the overall cost of drug discovery & development is further contributing to the adoption of outsourcing model.

Over the years, there has been a significant change in the process of drug approval by the FDA. Recently, 21st Century Cures bill was passed in the U.S., which fastened the approval process for launch of breakthrough drugs and medical devices. These changes in approval processes are expected to drive innovation and are also anticipated to increase demand for preclinical services, thereby contributing to the market growth.

There is a lack of standardization as all CROs do not comply with international regulatory requirements such as Good Laboratory Practice (GLP) standards, which may lead to several quality issues. Therefore, biopharmaceutical and medical device companies generally outsource only low-end functions of preclinical trials to CROs, whereas high-end tests, such as genotoxicity, are generally performed in-house. However, improvement in quality standards adopted by the CROs is expected to overcome the challenge of standardization, as outsourced vendors are currently trying to comply with the international standards set by regulatory authorities such as the U.S. FDA and the European Medicines Agency (EMA).

According to a report by Servier Research Institute, 5.2% of failure rates are caused due to issues in preclinical pharmacokinetic testing. Bioanalysis and DMPK studies are expected to witness lucrative growth owing to rise in demand for pharmacokinetic services, to support toxicology tests for IND-enabling studies.

This segment is also expected to dominate the preclinical CRO market during the forecast period. This is owing to increase in trend of outsourcing end-to-end services, especially amongst the small- and mid-size biopharmaceutical companies that lack sufficient expertise in preclinical phase of drug development

North America held the largest share in the global preclinical CRO market and is expected to dominate the market over the forecast period. Presence of established early stage development CROs, such as Charles River Laboratories and LabCorp; better quality of work; established scientific experience & acumen; economic stability; and logistic advantages to big life science companies are a few factors contributing to the dominance of the region. 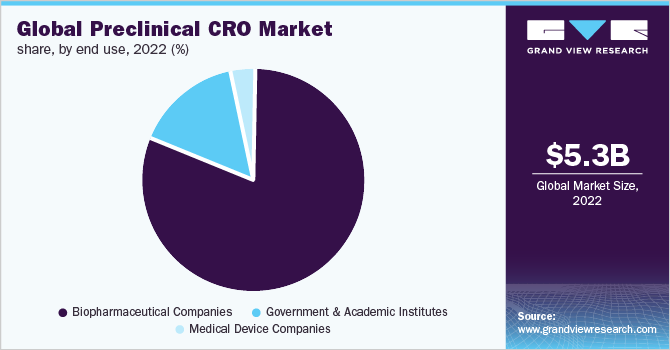 Life science companies are shifting from a functional to strategic outsourcing model, and this shift is expected to increase the demand for large CROs providing end-to-end preclinical services. For instance, AstraZeneca announced the extension of strategic partnership with CRL, for outsourcing their safety assessment & development drug metabolism and pharmacokinetic services.

This report forecasts revenue growth and provides an analysis on the latest trends in each of the sub-segments from 2014 to 2025. For the purpose of this study, Grand View Research, Inc. has segmented the preclinical CRO market on the basis of service, end use, and region: