The global pressure sensitive tapes market size was valued at USD 54.90 billion in 2017. It is poised to expand at a CAGR of 4.1% during the forecast period. Rise in concerns regarding automobile light weighting across the globe has led to increased adoption of tapes through substitution of conventionally used products such as fasteners and adhesives.

Increasing population coupled with rapid urbanization & industrialization in emerging economies is projected to prompt governments to increase their construction spending in order to cater to rising infrastructure needs. This, in turn, is anticipated to fuel the demand for pressure sensitive tapes in various construction applications over the forecast period. 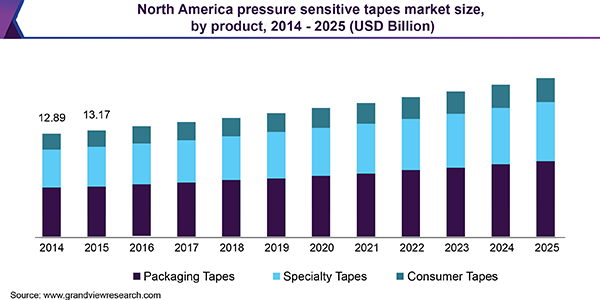 Fluctuations in raw material prices are a result of changes in crude oil prices and have a notable impact on procurement cost for manufacturers, thereby adversely affecting the growth of the market. Moreover, sanctions imposed on the import of crude oils are likely to influence the overall oil prices, resulting in fluctuations in raw materials prices.

Regulations have been imposed regarding the use of adhesives and backing materials for various applications. In addition, national governments in Europe and North America have mandated listing of materials used for the production of pressure-sensitive tapes, thereby increasing the complexity of the regulatory framework.

The growth of the market is poised to be hampered by the presence of a number of substitutes such as adhesives, sealants, and fasteners. Extensive utilization of aforementioned products for bonding, across various end-use industries including automotive, building & construction, and aerospace, is projected to restraint market growth.

Specialty tapes are the fastest-growing product segment in terms of volume as well as  value during the forecast period. The segment is anticipated to register a CAGR of 4.3% in terms of revenue during the same period. Rising demand for specialty products in the automotive industry can be attributed to increasing emphasis on vehicle light weighting by major car manufacturers across the globe.

Increasing utilization of foam-based specialty tapes for bonding, noise reflection, and anti-vibration applications is estimated to provide an impetus to market growth over the forecast period. The use of advanced products for wire harnessing is expected to replace fasteners in the automotive industry, thereby leading to an increased demand for the product.

Packaging tapes are majorly manufactured with plastic as a backing material for its easier tearing ability and superior flexibility. Growth in the production and shipping of consumer goods is translating into greater consumption of packaging products. In addition, low cost coupled with superior packaging performance is likely to drive the market.

Consumer tapes are extensively used in various applications such as bonding, attaching, and temporary mounting. These products are manufactured using plastic backing with a mild to the strong adhesive. Surging demand for such products in commercial & residential interior modifications in the building & construction industry is poised to augment the pressure sensitive tapes market over the forecast period.

The demand for hot melt technology is primarily driven by their high consumption volumes in North America. Specialty products are generally manufactured using hot melt technology on account of superior product performance achieved through technology and ensures a longer product life for both indoor and outdoor applications.

The use of hot melt technology for double-sided tapes, primarily for mounting in the building & construction and automotive industries, is projected to augment the market over the forecast period. Hot melt technology-based specialty tapes use a strong synthetic rubber or resin adhesive, leading to a strong bond between tape and surface on which it is applied.

The expected replacement of solvent-based technology by UV-based tapes, primarily in thicker film products, owing to advantages such as an increase in line speed and superior efficiency is expected to support the growth of the latter over the forecast period. In addition, the product is also likely to replace water-based acrylics due to superior blush and moisture resistance.

Acrylic as an adhesive material for use in the specialty tapes segment accounted for about 46.0% of the overall revenue in 2017 on account of their superior characteristics to bond well to polar surfaces such as glass, metal, polycarbonates, and polyesters. As a result, the products with acrylic adhesives experience a high demand for outdoor applications, where critical long-term bonding is essential.

Traditionally, rubber-based adhesives were extensively used. They command a sizeable share in the specialty tapes segment on account of their low cost as compared to acrylic and silicone-based products. In addition, rubber-based products are considered to be excellent for general purpose products on account of their ability to adhere to several low energy and non-polar surfaces.

Silicone adhesives are poised to post the highest growth of 5.0 % in terms of value during the same period on account of excellent shear, UV, and solvent resistance offered by them. These adhesives primarily find application in release liner splicing and printed circuit boards owing to their excellent dielectric properties.

Specialty pressure sensitive tapes with woven & non-woven backing material is projected to exhibit a CAGR of 4.6% in terms of revenue owing to rising demand from the medical and hygiene industry. Furthermore, increasing utilization of double-sided cloth tapes in the building & construction industry for holding indoor carpets, rugs, and mats will augur well for the segment.

The demand for plastic-backed products is anticipated to be driven by high consumption level of consumer tapes. Plastic-backed tapes are used for a variety of applications including management of electrical wiring, packaging, and building & construction, which is estimated to contribute to the growth of the market over the forecast period. 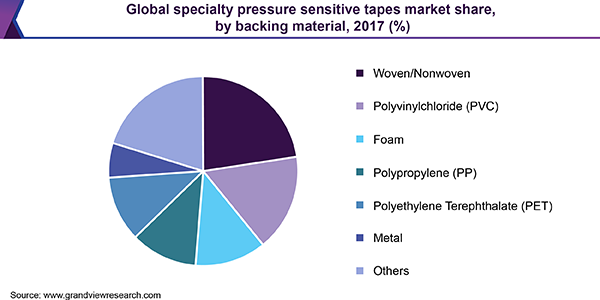 Polyvinylchloride (PVC) as a backing material is expected to rise at a CAGR of 5.0% in terms of revenue on account of its superior flame retardancy and high elasticity. In addition, it provides superior adhesion on a number of materials including metal, aluminum, and plastic. Furthermore, PVC-based specialty tapes find extensive utilization in applications that require electrical insulation and have major impact on fueling product demand.

Foam-based products are one of the majorly used products in the specialty products market. The segment is likely to expand at a CAGR of 4.8% on account of its increasing use in bonding and mounting applications in medium and high-end cars. Properties such as superior UV, water, and aging resistance are poised to escalate the demand for the product over the forecast period.

The market in Europe is estimated to progress at a CAGR of around 3.2% in terms of value during the same period. Surging demand for the product in the packaging industry is expected to spur the growth of the regional market in the coming years. Furthermore, the replacement of adhesives with tapes is likely to positively influence the growth of the market.

Asia Pacific was at the forefront of the global market in terms of both value and volume in 2017 on account of flourishing manufacturing industry with rising investments from key manufacturers. Countries including China, India, Japan, and South Korea are among the major revenue contributors in the regional market. High production of products and increased exports are supplementing the growth of the market in China.

Major players across North America, Europe, and Asia Pacific are focused on manufacturing high-quality products to compete in the international market. Companies in the market such as Tesa, 3M, and Intertape are increasing their investments in R&D for development of new technologies, such as hot melt and water based, to provide solvent-free adhesives.

Improved adhesion offered by the solvent-based technology is encouraging its consumption in Europe as customers and manufacturers are focused on quality compared to prices. However, growing competition from Asian manufacturers with their low-cost products is a major factor restraining competitiveness of European manufacturers.

This report forecasts volume and revenue growth at global and regional levels and provides an analysis of industry trends in each of the sub-segments from 2014 to 2025. For the purpose of this study, Grand View Research has segmented the global pressure sensitive tapes market report on the basis of product (backing material, adhesive chemistry), technology, and region:

How big is the pressure sensitive tapes market?

What is the pressure sensitive tapes market growth?

b. The Asia Pacific dominated the pressure sensitive tapes market with a share of 49.6% in 2019. Countries including China, India, Japan, and South Korea are among the major revenue contributors in the regional market n account of the flourishing manufacturing industry with rising investments from key manufacturers.

Who are the key players in pressure sensitive tapes market?

b. Some key players operating in the pressure sensitive tapes market include Tesa, 3M, Avery Dennison, Nitto Denko, and Intertape.

What are the factors driving the pressure sensitive tapes market?

b. Key factors driving the pressure sensitive tapes market growth include a rise in concerns regarding automobile light-weighting across the globe leading to increased adoption of tapes through substitution of conventionally used products such as fasteners and adhesives.