The global printed electronics market size was valued at USD 3.02 billion in 2015 and is anticipated to spectate a significant growth as printed electronic products is gaining a rapid traction. The estimated escalation of the technology is attributed to the ability to be incorporated in a variety of dynamic application areas, such as IoT and consumer electronics. 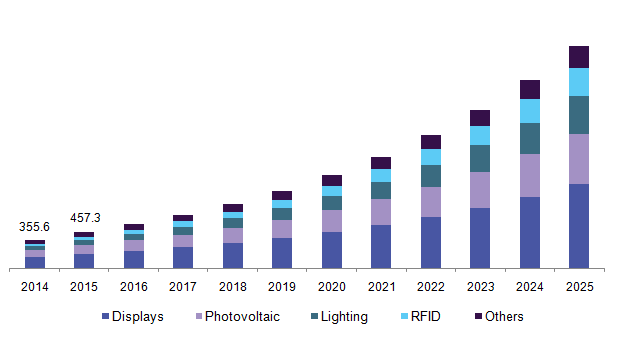 The increasing penetration of IoT is providing several growth opportunities, enlarging the scope of printed electronics applications across the sector. Additionally, the rising demand for advanced OLED displays and printed RFID devices are paving the way for increasing adoption of the technology owing to its low production cost, higher efficiency, and low power consumption.

Printed electronics has been a significant research arena, focusing on continuous upgrades and improvisations to enhance the existing abilities and for exploring more applications across various fields. Increased investments in the R&D by various associations, organizations, and the manufacturers over the last few decades have led to several benchmarking innovations and developments in the technology.

The end-product manufacturers majorly include the producers of consumer products, such as IoT devices, smartphones, display devices, and other communication devices. The manufacturers implement the technology into various products based on the necessity and supply to the distributors or retailers for sales purposes. The prominent players in the industry are focusing on mergers and acquisitions or distribution partnerships to establish the grip in the emerging regions such as Asia Pacific.

For instance, Thin Film Electronics ASA (U.S.) has signed a distribution agreement with a Chinese company, CymMetrik. The agreements aim toward the expansion of sales, particularly in China, Taiwan, India, and other Asia Pacific nations. The printed electronics technology is experiencing heavy demand in the continent owing to the increasing consumer electronics manufacturing practices and thus, expected to gain considerable traction over the estimated time.

The materials market segment includes the vital components required for the printed electronics technology, which include inks (conductive inks) and substrates. The ink segment is expected to be the largest and major revenue generating segment over the forecast period.

Based on the technologies, the market is segmented into inkjet, screen, gravure, and flexographic technologies. The screen printing technology segment was the largest in terms of revenue, in 2015 and is expected to dominate the segment over the forecast period.

However, the inkjet printing technology is estimated to witness an enormous growth of over a CAGR of 20% over the forecast period. The segment growth is attributed to the features such as flexibility of printing, low material consumption and wastage, initial setup costs, and compactness.

The devices market segmentation includes display devices, photovoltaic, lighting, RFID, and other devices. This technology is undergoing a steady adoption rate in other devices segment that includes printed batteries, sensors, medical & healthcare, and media. Display devices and photovoltaic devices constitute for the largest market shares in 2015 and are anticipated to maintain the dominance over the forecast years. 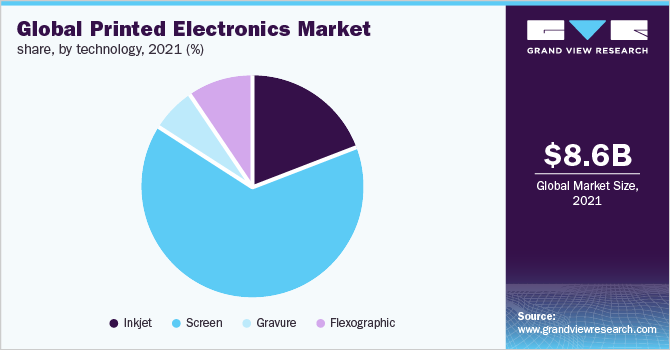 The RFID device segment is witnessing a notable attraction across the globe owing to its increasing application in the growing packaging industry. The printed electronics RFID devices are witnessing heavy demand in the packaging sector owing to the accuracy, authenticity, reliability, and cost-effectivity rendered. Hence, the RFID device segment is expected to witness a substantial growth with the highest CAGR from 2016 to 2025.

The Asia Pacific regional market would be dominating the industry in terms of revenue in 2015. The spectacular growth is attributed to the increasing adoption of printed electronics technology in the consumer products applications. The Asia Pacific region is anticipated to be an emerging market, growing at the fastest CAGR from 2016 to 2025 on account of the flourishing electronic manufacturing sector.

This technology is also projected to gain traction in the North American and European regions, owing to the increasing investments in R&D and growing adoption of the technology in various industrial applications such as photovoltaic, lighting, and RFID devices. The regions are estimated to witness steady growth in terms of CAGR over the forecast period.

The key industry players of the marketplace include BASF SE, DuPont, Molex, Inc., PARC, a Xerox company, E-Ink Holdings, Inc., and Thin Film Electronics ASA. The marketplace is witnessing a focused competition between the key players for understanding the market and establishing domination via rigorous R&D, innovative product launches, and enhancements in printing capabilities.

This report forecasts revenue growth on the global, regional, and country levels and provides an analysis of the latest trends and opportunities in each of the sub-segments from 2014 to 2025. For the purpose of this study, Grand View Research has segmented the printed electronics industry on the basis of material, technology, device, and region: