The global probiotic ingredients market size was estimated at USD 2.09 billion in 2018 and is anticipated to register a CAGR of 7.9% during the forecast period. The growth is driven by increasing consumer awareness regarding preventive healthcare coupled with increasing expenditure on probiotic, most notably in countries such as Japan, Germany, and the U.K.

Awareness regarding preventive healthcare is on the rise, owing to various factors such as increasing disposable income, rising standards of living, aging population, and changing attitude towards healthcare. Additionally, the easy availability of information about preventive healthcare on the internet is contributing to raising awareness. 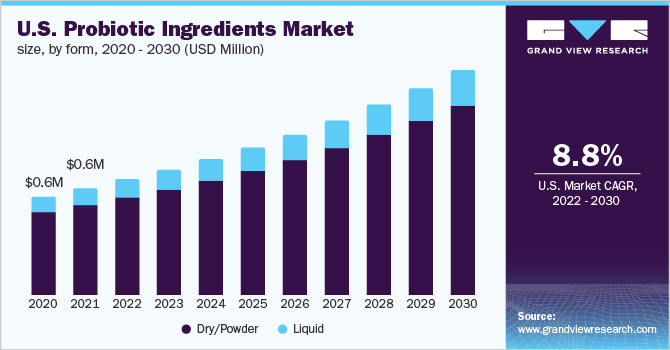 Probiotics can be used to prevent diseases related to oral health, bacterial vaginosis, and urinary tract. They can also be used to prevent diseases such as respiratory infections, necrotizing enterocolitis, and bowel diseases. The risk of occurrence of these diseases is high, particularly among the geriatric population. Probiotic prove to be an easily available and safe measure to prevent the occurrence of these diseases. This trend is anticipated to continue driving the probiotic ingredients market over the forecast period.

The bacteria segment led the market in 2018 with a revenue of USD 1.74 billion and is expected to retain its pole position over the forecast period. Extensive research has been carried out on bacteria such as lactobacillus and bifidobacterium in the recent past. This, in turn, has been strengthening the bacteria segment across the globe.

Bacteria are extensively used in applications such as probiotic food and beverages and dietary supplements to impart health benefits to the host. Widespread awareness regarding bacteria has benefitted the segment market demand in the recent past and this trend is expected to continue over the forecast period.

The probiotic food and beverages segment led the market in 2018 by registering a revenue of USD 1.70 billion. The growth in consumption of probiotic products such as yogurt is prompting an increase in demand in food and beverage applications. Furthermore, major industry participants are trying to enter into long term supply agreements with food and beverage companies, most notably in regions such as Central and South America to inculcate their proprietary strains in food products.

Increasing gut health concerns, geriatric population, and efficacy of probiotic products in providing health benefits are expected to complement the growth of probiotic food and beverages segment over the forecast period. 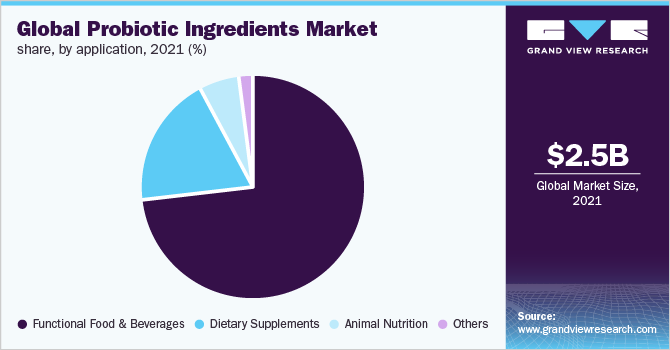 This trend has also prompted a rise in the usage of animal feed probiotic as they do not have any side effects. Probiotic animal feed is used to decrease the mortality rate and to promote feed conversion efficiency and proper growth. They are fast replacing antibiotics and this trend is expected to benefit the market over the forecast period.

Based on form, the market is divided into dry form and liquid form. The production of dry form employs various techniques of freezing and freeze drying. Though these production techniques are considered efficient in the industry, the production of probiotic ingredients leads to high energy consumption and transportation costs.

Prominent market players are focusing on introducing and experimenting with probiotic ingredients in liquid form to develop an equitable solution. Such factors are expected to drive the liquid form segment over the forecast period. The liquid form has also increased the scope of application of probiotics across the globe. For instance, flavored probiotic yogurt has been gaining widespread popularity in North America, most notably in the U.S.

Europe held the largest market share of 35.5% in 2018. The region is expected to maintain its dominance in the market throughout the forecast period. The presence of major market participants in the region, high awareness regarding probiotic usage, and easy availability of products have benefitted the regional demand in the recent past and are expected to continue over the forecast period.

The Asia Pacific is anticipated to be the second-largest market in 2025 closely following Europe. Rising preference for functional foods and rising standard of living is expected to benefit the regional market in the forthcoming years.

The companies are focusing on partnerships with dairy companies for their proprietary strain inculcation in the products. Key market participants are trying to increase their regional presence in emerging markets such as China, India, and Japan by setting up manufacturing facilities in the Asia Pacific. Also, prominent industry players are utilizing trade zones established between countries to market their products.

This report forecasts revenue growth at global, regional, and country levels and provides an analysis of the latest industry trends in each of the sub-segments from 2014 to 2025. For this study, Grand View Research has segmented the global probiotic ingredients market report based on ingredient, application, end-use, form, and region: