The global radiofrequency ablation devices market size was valued at USD 2.8 billion in 2018 and is projected to expand with a CAGR of 11.6% over the forecast period. The market is majorly driven by the growing prevalence of chronic and cardiovascular diseases and preference for minimally invasive surgeries. According to the Centers for Disease Control and Prevention (CDC), Atrial Fibrillation (AF) is projected to affect 17.9 million in Europe by 2060 and 12 million people in the U.S. respectively by 2050.

Also, the growing geriatric population coupled with rising life expectancy is expected to boost the growth. Geriatric people are more susceptible to chronic diseases, driving the demand for highly effective treatment, which in turn boosts the RF ablation market. According to the World Health Organization (WHO), the world’s population aged 60 years and above is expected to reach 2 billion by 2050 from 900 million in 2015. The demographic tends to have the highest disability rate and maximum need for effective care and treatment, which is anticipated to propel the growth. 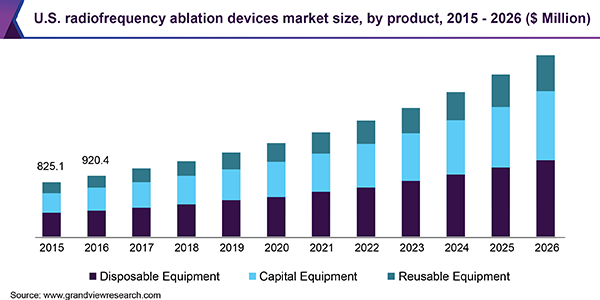 Growing healthcare expenditure and preference for minimally invasive surgeries has become a major factor in driving the market growth. Radiofrequency ablation is an effective treatment for small cancers and can be repeated if new cancer appears. According to the U.S. Census Bureau, global healthcare spending is anticipated to reach USD 18.28 trillion by 2040, at a CAGR of 2.6%. This is anticipated to positively influence the revenue generation from radiofrequency ablation devices.

Rising prevalence of chronic pain disorders such as arthritis and osteoporosis coupled with improving healthcare infrastructure will propel market growth. According to the U.S. Department of Health & Human Services, in 2015, 15 million adults were suffering from severe joint pain due to arthritis and by 2040 an estimated 78 million (26%) U.S. adults aged 18 years and above are anticipated to be diagnosed with arthritis.

Based on the product, the market is trifurcated into disposable, capital, and reusable equipment. Disposable equipment accounted for the largest market share in 2018 and is expected to witness the fastest CAGR over the forecast period. Advanced technology with the capability of creating large regions of coagulative necrosis in a controlled manner, being relatively low toxic, and decreased the risk of complications drive the growth of the disposable radiofrequency ablation devices market.

Product launches will drive market growth over the forecast period. In April 2017, Medtronic launched the OsteoCool RF Ablation system in Canada for the indication of bone metastases. This is the only RF ablation system with dual-probe capabilities that provides the customized, flexible, and predictable treatment.

Based on the application, the market is segmented into surgical oncology, cardiology, and cardiac rhythm management, pain management, gynecology, and cosmetology. Surgical oncology held the largest market share in 2018. Surgical oncology is gaining traction as radiofrequency ablation can be used to treat cancerous cells to improve the survival of high-risk patients with unresectable and refractory tumors. RF ablation reduces the potential side effects, has lesser recovery time, and can be used on patients suffering from multiple tumors that cannot be treated via open surgery. 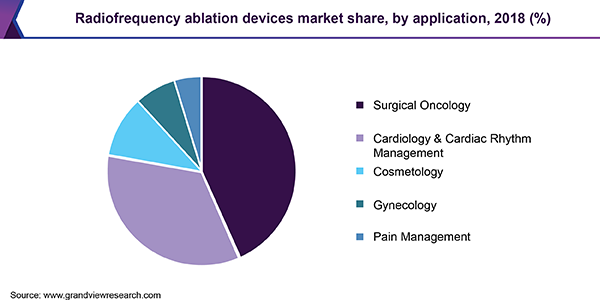 Cardiology and cardiac rhythm management segment are expected to expand at the fastest CAGR during the forecast period owing to the increase in the risk of developing Atrial Fibrillation (AF). According to the Department of Health, National Service Framework for Coronary Heart Disease, AF is the most common arrhythmia and catheter ablation method is anticipated to be one of the most commonly performed electrophysiological procedures in the upcoming years, driving the market growth.

North America is expected to maintain its dominance over the forecast period. Major factors contributing to regional growth are the high prevalence of cancer, technological advancements, high purchasing power, and government support for quality healthcare. According to the American Cancer Society, Inc., in 2019, approximately 1,762,450 people will be diagnosed with new cases of cancer in the U.S. and 606,880 people will die from the disease.

Asia Pacific is anticipated to exhibit the fastest CAGR over the forecast period. The introduction of advanced technology such as multi-needle electrode showcasing accuracy, portability, and cost-effectiveness is expected to have a positive impact on the regional market. Also, increasing disposable income, improving healthcare infrastructure, and rapidly growing economic conditions in the emerging markets of China and India are responsible to fuel the growth in the Asia Pacific.

The key players are strengthening their position in the industry through activities such as collaborations, mergers, and acquisitions. For instance, in September 2018, AngioDynamics acquired BioSentry Tract Sealant System technology from Surgical Specialities, LLC, and RadiaDyne and its proprietary OARtrac radiation dose monitoring platform to build a continuum of care within the oncology space. This strategy helps the company to expand the oncology business.

This report forecasts revenue growth at global, regional, and country levels and provides an analysis of the latest industry trends in each of the sub-segments from 2015 to 2026. For this study, Grand View Research has segmented the global radiofrequency ablation devices market report based on product, application, and region: