The global recovered carbon black market size to be valued at USD 490.8 million by 2027 and is expected to grow at a compound annual growth rate (CAGR) of 32.6% during the forecast period. The market growth is anticipated to be driven by the rising demand for the product in the manufacturing of high performance coatings. The coatings industry is under high scrutiny due to the consumption of VOC emitting raw materials. Recovered carbon black (rCB) acts as a substitute to the traditional carbon black enhancing the aesthetic and protective qualities of coatings. 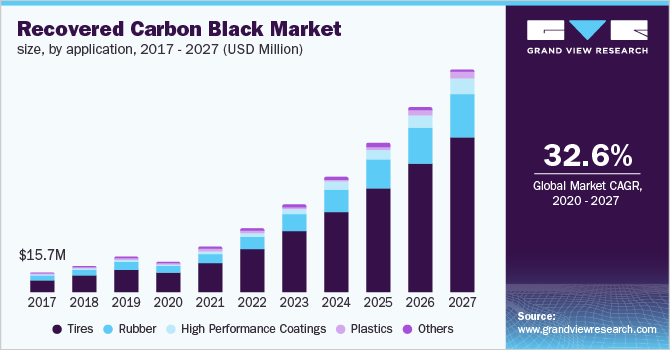 Recovered carbon black is commonly manufactured by a thermal catalytic decomposition process called pyrolysis, in which tire rubber is recycled to produce carbon black. The process also yields steel and oil which are further utilized across automotive, construction, and industrial applications. According to EnviroCB, one of the leading recovered carbon black manufacturers, around 18 million tons of tire waste is generated every year globally.

Recovered carbon black is commonly manufactured by a thermal catalytic decomposition process called pyrolysis, in which tire rubber is recycled to produce carbon black. The process also yields steel and oil which are further utilized across automotive, construction, and industrial applications. According to EnviroCB, one of the leading recovered carbon black manufacturers, around 18 million tons of tire waste is generated every year globally.

The U.S. led the consumption of recovered carbon black globally, due to the significant number of market players and the huge number of waste tire generation annually. In December 2019, EPA and the Rubber Manufacturers Association published an article that stated that annually over 290 million tires are discarded in the country. However, about 130 million tires are used to derive sustainable fuel, whereas over 16 million are used to recover carbon black to produce rubber and produce new tires. The consumption of recovered carbon black in the U.S. is dominated by tire production applications followed by the production of other rubber goods.

Globally, the demand for high performance coatings is anticipated to witness robust growth due to their superior protection ability and aesthetic appeal. These coatings provide additional durability and thus are gaining preference in the automotive and aerospace industries. The global automotive production has witnessed considerable growth over the past years. The global production was 94.97 million units in 2016 which rose to 95.63 million units in 2018, as per the statistics by OICA. The rising automotive production is thus anticipated to boost the demand for high performance coatings as well as tires, thereby positively affecting the rCB market.

The market is widely applicable in non-tire and tire sectors as an eco-friendly and economical supportive filler. The global recaptured carbon market is being driven by the rapidly rising auto and transportation industries. In addition, its usage in elastic item creation is also creating higher demand for consumers and portfolios.

With enhanced protective capability and visual appeal, high-performance coatings are expected to see a rapid increase in demand. These coatings are gaining popularity in the aerospace and automobile industry. As per OICA statistics, the global production of automobiles was around 80.14 million units in 2021. Thus, increasing automobile production is expected to drive the market further.

The market is providing valuable opportunities for global central members as a result of the strict informal regulations that require the usage of the product in various end-use industries such as transportation, elastics, and vehicle. However, the rising cost of recovered carbon black is expected to act as a notable restraint for the market.

Tire manufacturing was the most dominant application for recovered carbon black with a share of 71.4% in 2019. The growth in the overall transportation sector along with the urbanization of developing countries of Asia Pacific and Central and South America is anticipated to propel recovered carbon black (rCB) market growth over the forecast period.

Tire production increased significantly in emerging countries of Asia Pacific, especially China and India, due to the growth in automotive production. This increase in production is attributable to the growing transportation industry in these economies. Factors such as low cost land for production facilities, a rise in disposable income, and the easy availability of skilled labor has had a positive impact on the growth of the industry in the region.

Rubber manufacturing was the second dominant application area of recovered carbon black, which is projected to witness strong growth with a CAGR of 32.4% from 2020 to 2027. General rubber goods are primarily used in the automotive industry, but also find application in construction, mechanical and pharmaceutical industries owing to properties such as durability and abrasion resistance. The growth of these end-use industries along with the rising need for sustainable solutions and products is projected to drive the market in rubber manufacturing over the forecast period.

North America held the largest market share of 38.0% in 2019. High level scrutiny of the manufacturing sector by local government bodies in the region is driving the market. In addition, the growing adoption of waste management programs by the manufacturers in the region for recycling and reusing waste products is propelling industry growth in the region. 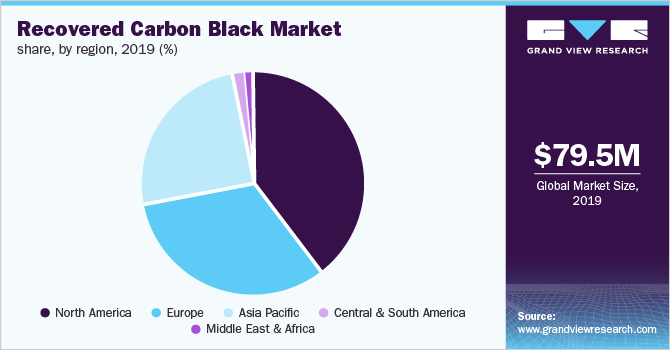 The Asia Pacific was the third largest market for recovered carbon black with a share of 26.7% in 2019 after Europe and North America. The penetration in the region is low compared to the developed regions due to the lack of technological advancements in the production of recovered carbon black. The industry growth is projected to be a result of high industrial growth due to the monetary framework that encourages private investments in the manufacturing sector with favorable government policies.

However, the Asian economy and the manufacturing sector is projected to face turmoil in the latter parts of 2020 due to the pandemic of Covid-19, especially in China and India. The pandemic is projected to slowdown the entire manufacturing industry along with the automotive sector and thus have a negative impact on the demand for recovered carbon black. The manufacturing industry is anticipated to witness recovery in 2021, which is anticipated to benefit the recovered carbon black market. 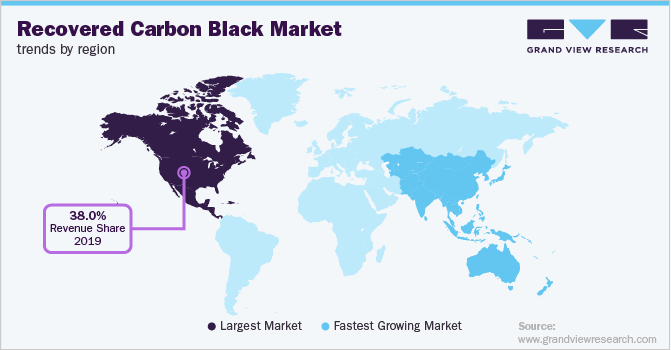 India is anticipated to lead the market growth owing to the rising awareness of environmental sustainability. In October 2019, a leading supplier of recovered carbon black producing machinery, Klean Industries, announced its supply to 5 plants in India. Klean further plans to expand its business in Asian countries due to the shortage of virgin carbon black and import taxes, especially in India.

Europe is the second largest consumer of recovered carbon black after North America. High demand from tire industry is expected to drive the market demand in Europe. Recovery of the automotive industry in Austria, France, Romania and Russia are anticipated to boost market growth over the forecast period. The automotive production in these countries grew at a rate of 69.7%, 2%, 31.1%, and 13.9% respectively from 2017 to 2018 as per the data published by OICA. High performance coatings and tire production are thus projected to lead the product demand in Europe with an overall CAGR of 31.8% from 2020 to 2027.

The market is still in the nascent stage with manufacturers developing products with different grades and technological advancements. The key companies are constantly focusing on the development of new product grades to suit different applications. For instance, Pyrolyx manufactures the product in three grades which are cct-6400, rC-6400 and rC-7400. The quality of cct-6400 differs as per the raw material. European tires tend to have a higher amount of silica content compared to those in the U.S. Thus, the Ash content in European tires is 20% and that in U.S. tires is 14%. Cct-6400 and rC-6400 are both used to manufacture tire and non-tire rubber, whereas rC-6400 is highly recommended in the manufacture of high performance coatings and plastics.

Some of the prominent players include:

This report forecasts revenue growth at global, regional, and country levels and provides an analysis of the latest industry trends in each of the sub-segments from 2016 to 2027. For the purpose of this study, Grand View Research has segmented the global recovered carbon black market report on the basis of application and region. 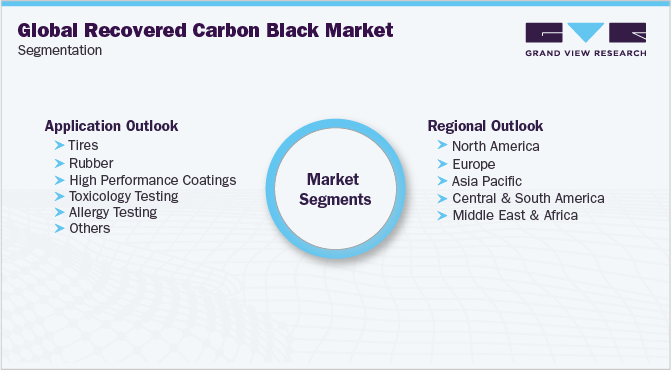 How big is the recovered carbon black market?

What is the recovered carbon black market growth?

b. North America dominated the recovered carbon black market with a share of 38.0% in 2019. This is attributable to the presence of numerous market players and generation of huge number of waste tires annually.

Who are the key players in recovered carbon black market?

What are the factors driving the recovered carbon black market?

b. Key factors that are driving the market growth include rising demand for manufacturing of high performance coatings for automotive & aerospace industries.