The global recycled metal market demand was estimated at 787.5 million tons in 2018 and is expected to grow at a compound annual growth rate (CAGR) of 4.1% from 2019 to 2025. The market growth is driven by increasing emphasis on the secondary production of metals owing to environmental concerns such as energy consumption and scrap disposal. 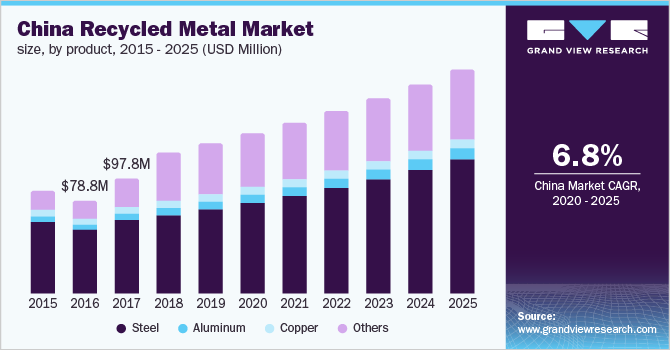 Metal recycling is an important aspect as metals can be recycled several times without any alterations in their characteristics. As a result, scrap metal possesses major significance for use as a raw material for secondary production.

Based on the product, the market has been segmented into steel, aluminum, copper, and others. Steel is the most recycled metal in the world, as a result, it accounted for the largest share of the global recycled metal market in 2018. The growing consumption of steel in construction, automotive, electronics, and consumer goods industries is projected to result in increased demand over the forecast period.

Factors including the utilization of non-renewable resources, consumption of a large amount of energy, fluctuation in raw material prices, and regulations about mining ores have compelled manufacturers to adopt the Electric Arc Furnace (EAF) process over the Basic Oxygen Furnace (BOF) process for its utilization in crude steel production. This has led to an increased demand for recycled steel across the world. The production of crude steel by the EAF process increased by 10.1% in 2018 in comparison to 2017, whereas the increase in total crude steel production was 7.04%.

Aluminum was the second-largest recycled metal segment in 2018 in the global market. Aluminum is consumed at a large scale and holds high value as scrap material. The demand for aluminum is anticipated to increase rapidly over the forecast period owing to its increasing demand in the automotive and consumer goods industries. This is a positive sign for the recycled aluminum market as more demand for aluminum leads to its increased production.

In terms of revenue, North America market for the recycled metal is expected to register a growth rate of 4.5% over the forecast period. The presence of various recycling facilities and scrap dealers in the region has boosted the consumption of recycled metal. The U.S. is a leading producer of steel that is produced via the EAF process. The country is also the largest producer of secondary aluminum. Increasing production of these metals due to their high demand from construction, automotive, and consumer goods industries is anticipated to drive the market for recycled metal over the forecast period.

Europe held the second-largest volume share of the market in 2018. Scrap metal holds significant importance in the region. The region is a major consumer of recycled steel and recycled copper. Copper carries high significance owing to its high recyclability rate and utilization in various end-use industries in the region. According to the International Copper Study Group, around 50% of copper utilized in Europe comes from recycling. 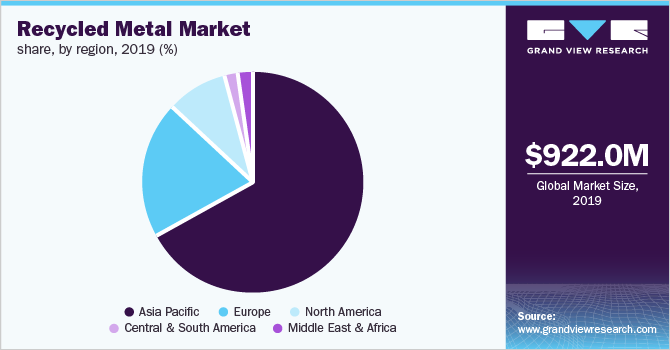 According to a 2019 report by World Steel Association, Europe produced 210.1 million tons of crude steel in 2018, out of which 46.7% was produced by the EAF process. In 2017, EU-28 consumed over 93 million tons of steel scrap for crude steel production, which is more than 5.6% compared to consumption in 2016. Steel packaging is an important industry in Europe. As per APEAL, as of 2016, 79.5% of steel packaging was recycled in Europe. The percentage is expected to reach 80% by 2020. The growing consumption of recycled steel and copper is anticipated to augment market growth over the forecast period.

Asia Pacific market for the recycled metal is expected to grow at a CAGR of 4.6%, in terms of volume, over the forecast period. A growing emphasis on environmental concerns and proper waste management are the major factors triggering the growth of the market in the region. India is a lucrative market for recycled metal. The growing manufacturing sector in the country is leading to increasing metal production and high demand for scrap. However, despite being among the top scrap generating countries, the country emerged as the second-largest importer of scrap, as of August 2019. As a result, the government has put forth certain policies to encourage and boost the metal recycling activities. For example, on June 28, 2019, a Draft Steel Scrap Policy was introduced to increase the country’s steel production to 300 million tons by 2030 with the EAF process having a share of 35% to 40%. Such government initiatives across the world are anticipated to have a positive impact on the growth of the global market.

For example, in June 2019, Tata Steel announced its plan to set up India’s first recycling plant in Haryana. This initiative is aimed at helping the company gain an early mover advantage in the Indian market. Some of the prominent players in the recycled metal market include:

This report forecasts revenue growth at the global, regional & country levels and provides an analysis of the industry trends in each of the sub-segments from 2014 to 2025. For this study, Grand View Research has segmented the global recycled metal market report based on product and region:

How big is the recycled metal market?

What is the recycled metal market growth?

Which segment accounted for the largest recycled metal market share?

b. Steel dominated the recycled metal market with a share of 34.1% in 2019. This is attributable to growing consumption of steel in construction, automotive, electronics, and consumer goods industries.

Who are the key players in recycled metal market?

What are the factors driving the recycled metal market?

b. Key factors that are driving the market growth include increasing emphasis on the secondary production of metals owing to environmental concerns such as energy consumption and scrap disposal.