The global refrigerant market size was valued at USD 15.4 billion in 2019 and is projected to grow at a compound annual growth rate (CAGR) of 4.6% from 2020 to 2025. Asia Pacific and Latin America are two of the fastest-growing regions in terms of volume and are characterized by rapid urbanization as well as evolving cold chain sectors. The industry is, however, highly reliant on regulations and policies of various environmental protection agencies. 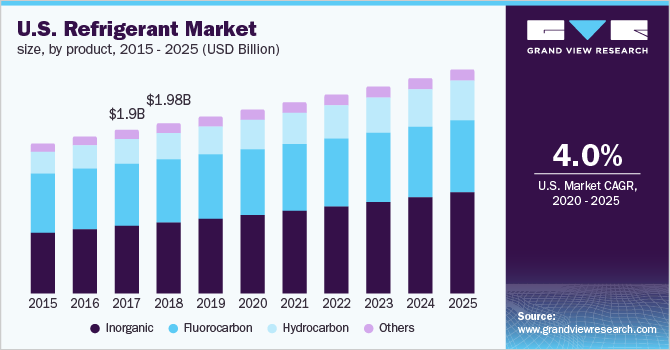 Increase in demand for energy-efficient cooling solutions and rising awareness regarding global warming and ozone depletion is expected to shape the industry over the forecast period. Fluorocarbon phase-out as per regulations laid down by the Montreal Protocol and updated by the Kyoto Protocol has led to a resurgence in demand for natural refrigerants. The hydrocarbon and inorganic segments are, therefore, expected to witness considerable growth.

Increased industrialization in emerging economies such as China, India, and Japan has led to establishment of a large number of data centers, subsequently fueling demand for refrigerants. Factors such as rise in manufacturing units across Asia Pacific and surge in demand for improved maintenance of industrial equipment will further augment the global refrigerant market.

Refrigerants are chemicals that absorb heat from the surroundings and are used in cooling products for this characteristic. Refrigerant is a fundamental part of contemporary cooling systems such as air conditioners, refrigerators, freezers, chillers, etc. At present hydrofluorocarbons are the most recurrently used refrigerant in the market by maximum manufacturers as its earlier parallel, chlorofluorocarbons were discarded due to their ozone-depleting nature after the Montreal protocol.

Fluctuating climatic conditions and rapid economic growth in emerging economies are the major macroeconomic factors impacting the industry. The development of the consumer electronics sector and the economic development of Least developed Economies are the major growth driving factors of the refrigerant industry. The increase in purchasing power has led to an increase in the use of domestic air conditioning and refrigeration systems. The growth in the cold storage market has also led to increasing in demand for refrigerants globally.

Inorganic refrigerants are also dominant alternatives in the refrigerant industry due to their environment-friendly nature. They have approximately zero Ozone Depletion Potential (ODP) & Global Warming Potential (GWP), are non-toxic in nature and are economically feasible which has led to their utilization in industrial, commercial as well as in domestic applications.

The rising number of data centers globally that have servers for the internet is expected to play a major role in driving future market demand as the server rooms are expected to be temperature controlled. The population size using internet services is growing exponentially in emerging countries as internet services are made approachable and economically feasible. The importance of data centers is expected to increase as more devices and daily activities are linked to the internet. Typically, a data center consumes more than 100 kg of refrigerant per year.

The cold chain logistic trend and frozen food is rapidly gaining grip due to the amplified global trade of food and healthcare goods. Rendering to the Food and Agriculture Organization, United Nations, each year fresh food yields in billions of tons are lost to poor cold chain systems in developing economies. Perishable foods such as fruits, vegetables, poultry, meat, dairy require a constant cold chain as they are likely to go bad. By enhancing the constraints of temperature, atmospheric and moisture composition and appropriate management of the goods, cold chain service suppliers can improve the shelf life of perishable food items. These factors are anticipated to drive the application of refrigerants over the forecast period.

The refrigerant market has presence of multinational players that are involved in premeditated mergers & acquisitions, regional expansion, and product developments and inventions to strengthen their market position. Companies are struggling to reach optimum production levels while efficiently allocating the resources and reducing emissions.

Fluorocarbons emerged as the dominant product segment in 2016, accounting for 53.13% of the overall volume. They are extensively used for domestic purposes and in air conditioning equipment. However, stringent government regulations imposed on consumption and manufacture of fluorocarbons owing to potential ozone depletion and global warming are likely to hamper the growth of this segment.

HFCs are widely utilized in air conditioning applications as they are less harmful to the atmosphere in comparison to other fluorocarbon refrigerants. They also serve as the most prominent substitutes for phased-out CFCs and HCFCs. Emerging nations are slowly phasing out fluorocarbon refrigerants and are working on phasing out HCFCs. This will, in turn, result in high demand for HFCs globally.

Energy efficiency, low cost, and eco-friendly nature of hydrocarbons are key traits driving their demand. They are also being increasingly preferred as an ideal substitute for fluorocarbon-based cooling equipment and processes owing to cheap prices and easy availability. Europe serves as a prominent consumer of hydrocarbons, as the air-conditioning industry in the region has been swiftly employing them in all their cooling products.

Inorganic refrigerants emerged as the second-largest segment in 2016, accounting for 24.17% of the overall volume. Its superior thermal efficiency has allowed it to play a significant role in industrial applications. Owing to low cost, easy availability, and eco-friendly nature, the segment is expected to grow steadily in the future.

Stringent regulations and policies proposed by the United Nations Framework Convention on climate change regarding global warming and ozone depletion substances are expected to play a crucial role in boosting demand for hydrocarbon and inorganic refrigerants. Multinational companies in the field are increasingly investing in R&D to develop novel and eco-friendly offerings to ensure a sustainable business model.

The stationary air conditioning, chillers, and heat pumps segment dominated the market by application and accounted for over 47% of the overall volume in 2016. Increased spending power of the middle class on consumer appliances, such as refrigeration systems, has resulted in the growth of this segment. Rising demand for cooling equipment owing to rapid industrialization, deteriorating weather conditions, and growth in the manufacture of consumer appliances has also positively influenced its demand.

Commercial refrigeration is another application witnessing significant growth. Increasing hypermarket, supermarket, and food retail chains, coupled with rise in consumption of packaged and frozen foods, has boosted the demand for commercial refrigerants. 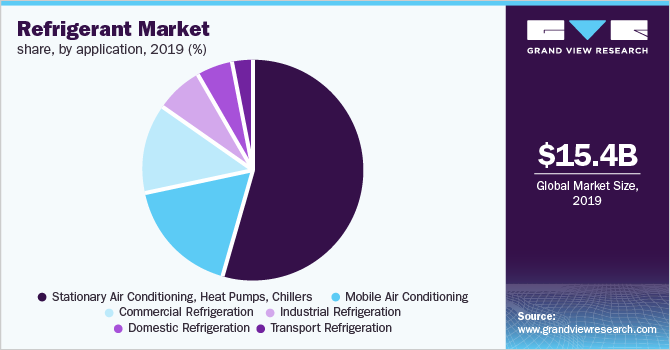 Domestic refrigeration demand is fueled by rising adoption of energy-efficient and environment-friendly products in developed economies like North America and Europe. Across emerging economies such as Asia Pacific and Middle East and Africa, demand for domestic refrigeration is spurred by food wastage concerns, need for improved food quality, and an increase in disposable income, leading the more affluent middle class to spend more on modern appliances.

Growth of refrigeration market, particularly in cold-chain logistics, is driven by the boom in international trade of perishable commodities, consumer demand for frozen and chilled food and beverages, and demand from the life science and pharma industries. The segment is expected to witness substantial growth in Asia Pacific owing to increased healthcare spending, booming trade of fruits and vegetables and confectionery, and increased spending by the middle class on frozen food and beverages.

Air conditioning is observed to be gaining importance as a comfort feature in automobiles, thereby influencing consumer purchasing behavior and generating high demand for mobile air conditioning products and services. Air conditioning has also been considered as a factor resulting in increased efficiency in off-highway automobile applications, which has further boosted its demand.

Asia Pacific emerged as the leading consumer in 2016, accounting for 33% of the total volume. It is also projected to be the fastest-growing regional segment on account of several macro-economic factors such as burgeoning population, rising consumer disposable income, and rapid urbanization and industrialization.

In North America, the inorganic segment has gained a greater share due to technological advancements in the cold chain sector, increased concerns over food wastage, growing demand for refrigerated food and beverages, and stronger penetration of supermarkets. Ammonia held the dominant share in the inorganic segment owing to excellent cooling and efficiency exhibited by the compound.

Europe is the second-largest regional segment in terms of consumption owing to strong demand from mobile air conditioning, industrial, and commercial segments. The region is regulated by numerous legislations and manufacturers are compelled to adhere to stringent guidelines in order to ensure overall sustainability of products. 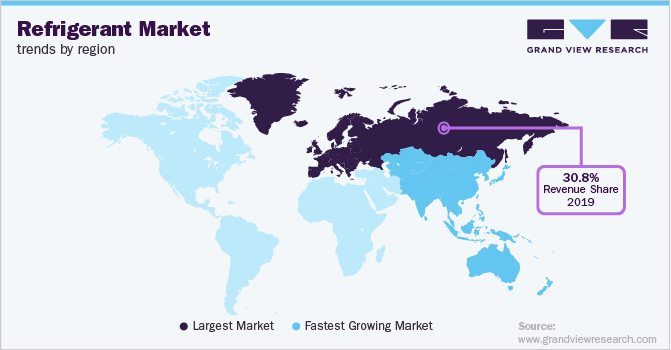 The Middle Eastern government has increased its backing for urban and infrastructural developments in countries such as Saudi Arabia, Qatar, Oman, and Egypt. These developments have upped the demand for air conditioning equipment, thereby promoting growth.

Several manufacturers have established production facilities in emerging economies and initiated joint ventures with Asian companies to expand their capacities and tap into lucrative opportunities presented by end-users. Furthermore, the availability of cheap labor and resources assists in reducing production costs, and cater to lost cost offerings for the refrigeration industry in the region.

Natural refrigerants are quickly acquiring market share owing to their exceptional properties of cooling and energy efficiency. The U.S. commercial refrigeration and mobile air conditioning industries are anticipated to witness a significant growth rate over the forecast period owing to the HFC eliminating plan and move to eco-friendlier natural and sustainable alternatives of refrigerants such as carbon dioxide and ammonia. The supermarket retail chains and demand for cooling equipment have also witnessed an upward trend in recent years as there has been increased growth in the development of supermarkets and demand for frozen goods has risen.

The Asia-Pacific region is the fastest-growing region and is expected to remain the same over the forecast period. The increase in the standard of living, increased purchasing power, increase in cold chain logistics, increase in commercialization are key drivers of the market. The increasing demand for cooling and refrigeration equipment owing to rising disposable incomes is anticipated to positively impact market demand. Stringent regulations are estimated to obstruct the growth rate. Japan is the dominant country in the refrigerant market for the region due to increased research and inventions in the country.

Honeywell International is a pioneer in developing low GDP and OWP blends. Innovations such as these are expected to inspire other industry players to invest significantly in R&D and production of environment-friendly products to meet stringent regulatory specifications and changing consumer preferences.

This report forecasts revenue growth at global, regional, and country levels and provides an analysis of industry trends in each of the sub-segments from 2014 to 2025. For the purpose of this study, Grand View Research has segmented the global refrigerant market report on the basis of product, application, and region: 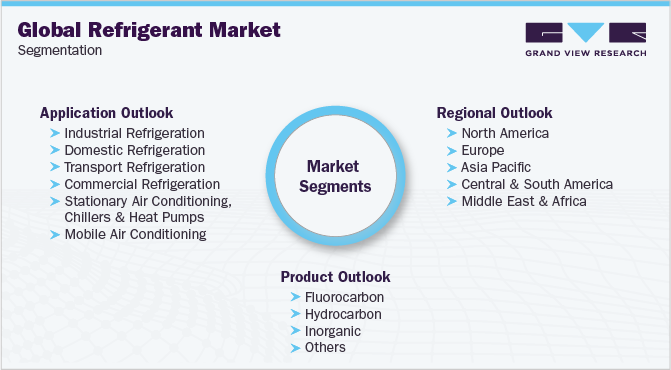 China is the largest manufacturer and consumer of refrigerants. The outbreak of COVID 19 has resulted in a significant impact on the supply of refrigerant gases, thereby resulting in increased prices. Refrigerant manufacturers in various countries have been facing issues associated with the supply of raw materials, thereby resulting in supply-demand imbalance and increased prices of the refrigerants. The updated report will account for COVID-19 as a key market contributor.