The Research Department Explosive market size in North America and Europe was estimated at USD 10.43 billion in 2018. Royal Demolition Explosive (RDX) is utilized in numerous military and civil applications such as pyrotechnics and cast PBX charges among others. The significant prevalence of mineral extraction activities in developed regions is estimated to create scope for business growth during the forecast period. Research Department Explosive (RDX) is also known as hexogen or cyclonite. 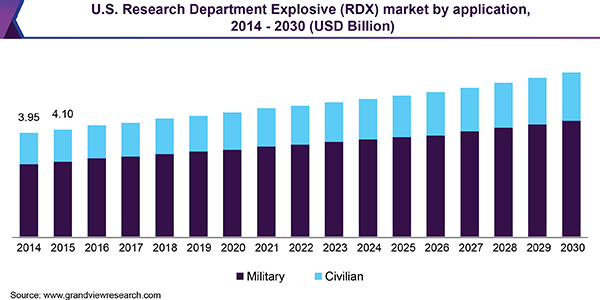 RDX is increasingly utilized in the mining and construction industries. The mining industry requires this high-performance explosive for exploration and rock excavation activities. North America and Europe's RDX market is driven by increasing defense expenditure along with rising mining activities across these regions.

RDX, also known as hexogen, can be used with other explosives, waxes, or oils to make military munitions. The production process of RDX involves multiple stages ranging from raw materials storing and feeding, nitration, decomposition, filtration, and transport. Manufacturers are spending extensively on R&D activities to develop innovative products to aid defense forces and cater to ever-increasing product demand.

RDX as a military explosive can either be used with explosives such as TNT to make cyclotrons that produce bursting charges for aerial bombs, mines, and torpedoes or can be used as a base charge for detonators. RDX in the civilian application, finds its use as a heating fuel, in fireworks, occasional rodenticide, and in the demolition of blocks.

The civilian application of hexogen is expected to grow at a CAGR of 2.6% by 2030 in North America with the growing demand for demolition blocks, fireworks, and civil pyrotechnics applications. Rising supply and demand of various fireworks such as powder-actuated nail guns, recreational fireworks, and others have significantly triggered demand in civil applications. 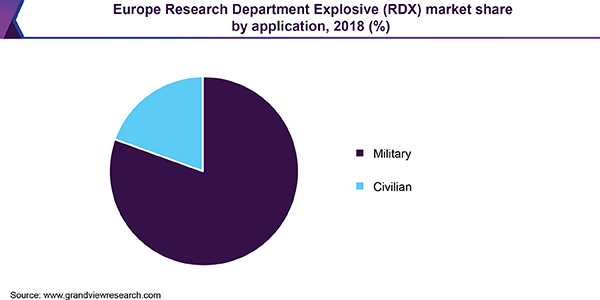 The military emerged as the fastest-growing application in this industry with a volume share of over 80% in 2018. Rapidly increasing defense expenditure across the U.S. has significantly boosted the industry growth. RDX (cyclonite) is widely utilized in numerous military applications, such as bombs, munitions of all calibers, plastic explosives, and missile warheads.

A positive product outlook for mining activity will drive business growth. In 2017, the U.S. had over 300 active metal mines and 900 industrial mineral mines further contributing to the product demand. Russia with a daily production of 9.5 million barrels per day, has the world’s largest proven oil depositions. These factors are expected to prove conducive to the industry growth over the forecast period.

North America Research Department Explosive market will witness significant growth owing to high demand in the military, mining, and construction sectors. The U.S. is characterized by technological advancements in manufacturing methods. Moreover, the utilization of a private investment model to plan road construction in the country is expected to augment the demand for explosives in the country.

Europe holds a significant market share in 2018. Mining is a significant economic activity for European countries including Germany and Russia. Germany is one of the major producers of lignite, refined selenium, kaolin, sulfur, potash, refined copper, and crude steel. Increasing extraction activities of ores are boosting demand for mining applications.

Increasing production of various commercial and industrial minerals and metals in Europe is expected to augment the demand for explosives over the forecast period. Rapidly expanding the mining industry coupled with increasing military and defense expenditure has driven the business growth across the region.

The prominent key players in the industry are Eurenco, Chemring Nobel, BAE Systems, Nitro Chem S.A., Austin Powder Company among others. The widening product portfolio is among the major strategy adopted by industry participants to strengthen industry foothold. For instance, in April 2017, SNPE approved an explosive manufacturing unit across France.

Stringent regulatory policies about environment conservation to play a key role in shaping the RDX market dynamics in upcoming years. The exploitation of mining resources and the revenue generated by such projects are anticipated to boost significantly over the forecast period, positively influencing the product demand.

This report forecasts revenue growth at global, regional & country levels and provides an analysis of the industry trends in each of the sub-segments from 2014 to 2030. For this study, Grand View Research has segmented the Research Department Explosivemarket report based on application and region:

How big is the research department explosive market?

b. The global research department explosive market size was estimated at USD 10.98 billion in 2019 and is expected to reach USD 11.4 billion in 2020.

What is the research department explosive market growth?

Who are the key players in research department explosive market?

What are the factors driving the research department explosive market?