The global retinal implant market size was valued at USD 30.0 million in 2017. It is expected to expand at a CAGR of 10.6% over the forecast period. Demand for retinal implants is increasing due to rising prevalence of target diseases, capability of restoring vision, and increasing geriatric population. 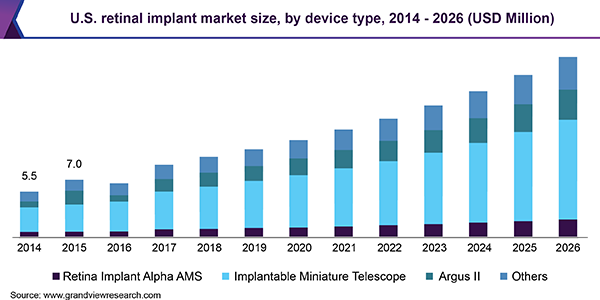 Researchers are focusing on retinal prosthetics owing to the relative ease of access to the retina for surgery. The retina has two types of photoreceptors, namely, rods and cones. Presence of Retinitis Pigmentosa (RP), Age-Related Macular Degeneration (AMD), or choroideremia may increase the risk of blindness with progression of the disease.

Currently, retinal implants are approved for the treatment of RP and end-stage AMD. According to the Foundation Fighting Blindness, RP causes blindness in around 1.5 million people in the world. Similarly, the National Eye Institute (NIE), a Department of National Institute of Health (NIH), states that in the U.S.; the number of people suffering from AMD was 2.1 million in 2010 and is expected to double to reach around 5.4 million in 2050.

In addition, according to the International Agency for the Prevention of Blindness (IAPB), AMD is the cause of blindness in around 5.0% of global blind population. Moreover, the same source also quotes that around 196 million people may suffer from AMD by 2020 and the number is expected to reach approximately 288 million in 2040. Therefore, presence of a large patient population is expected to drive the global retinal implants market over the forecast period.

Implantable Miniature Telescope (IMT) was first approved in 2010, for treatment of end-stage AMD in patients in the U.S. aged 75 years and above. Furthermore, in 2014, the minimum age limit for patients eligible for receiving IMT was reduced to 65 years and above. In addition to the U.S. Food and Drug Administration (FDA) approval, IMT also received the CE mark, which enables Vision Care Corporate to market the product in Europe. Moreover, Israel Ministry of Health has approved the product for sale and distribution. Such initiatives are anticipated to boost growth of this segment over the forecast period.

North America is expected to generate the highest revenue in the global retinal implant market over the forecast period. High prevalence of degenerative conditions and technological advancements may drive growth of the North America retinal implants market over the forecast period. In addition, rise in the number of AMD cases in the U.S. is also expected to boost regional expansion.

For instance, as per the Bright Focus Foundation, in 2016, around 11.0 million people in U.S. suffered from AMD. This condition generally has two forms, namely, wet and dry. The condition may get converted to wet form if it is not treated at the initial stage, ultimately leading to vision loss. Hence, most people prefer undergoing treatment at the primary stage to avoid such consequences. 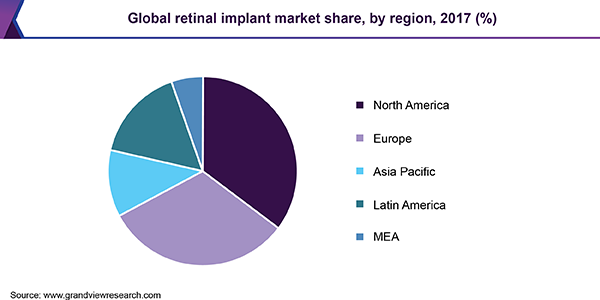 In Asia Pacific, the market for retinal implants is expected to hold the highest market share over the forecast period. Increasing geriatric population and disposable income are expected to boost this market over the forecast period. Moreover, increasing healthcare expenditure by governments and private sectors coupled with various initiatives undertaken by major market players to expand in untapped regions are anticipated to propel the regional market growth.

In October 2017, Retina Implant AG announced that patients with minimal or no vision, undergoing Alpha AMS subretinal implant will be supported with reimbursement from the company. Such initiatives can promote the usage of these devices for patients worldwide. The initiative is projected to increase the company’s customer base and geographic reach during the forecast period.

The market players are also taking initiatives to penetrate new untapped regions to maintain their viable positions in the market. For instance, in February 2018, Second Sight Medical Products announced its entry into the Singapore market, in collaboration with a leading international eye center. The initiative is expected to expand the company’s geographical reach during the forecast period.

This report forecasts revenue growth at global, regional, and country levels and provides an analysis of the latest industry trends and opportunities in each of the sub-segments from 2014 to 2026. For the purpose of this study, Grand View Research has segmented the global retinal implant market report on the basis of device type and region:

Adoption of retinal implants may get impacted due to the outbreak of the Covid-19 pandemic. It has been recorded that the people wearing an implant and contact lens tend to touch their eyes more often in comparison to an average person. Therefore, this can increase the risk of virus transmission. Moreover, people who opt for a retinal implant will have to be more cautious in order to avoid the pandemic. We are considering this pandemic impact on our estimates. The updated report will include COVID19 as a key market contributor.