The global retinal surgery devices market size was estimated at USD 1.56 billion in 2016 and is anticipated to grow at a CAGR of 7.8% during the forecast period. The market is predominantly driven by the growing prevalence of diabetic retinopathy and other chronic retinal eye diseases. Diabetic retinopathy is a major complication induced in diabetes. As a result of which, increasing the diabetic population base is predicted to be a high impact rendering growth driver for the market during the forecast period.

As per the statistics published in NCBI research, the patient population suffering from diabetic retinopathy is anticipated to reach 191.0 million by 2030. In addition, it was estimated that the population suffering from Vision-Threatening Diabetic Retinopathy (VTDR) will reach 56.3 million by 2030. The proportion of blindness attributable to diabetic retinopathy was found to be 15% to 17% for developed economies such as the U.S. and Europe, 3% to 7% for South-East Asia and Pacific region. Thus, the aforementioned statistics exemplify the unaddressed need and high clinical urgency to incorporate retinal surgery devices, thereby, presenting the market with lucrative growth opportunities during the forecast period. 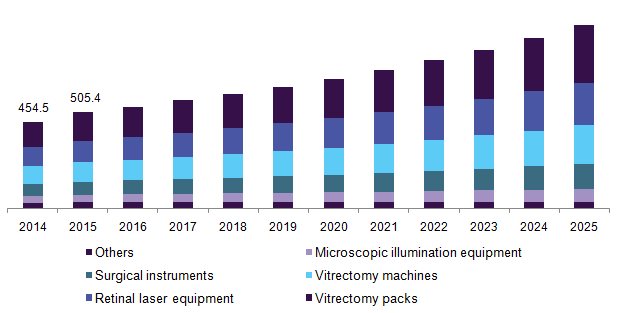 Low rate of compliance and non-adherence to comprehensive therapeutic approaches, formulated to reduce vision loss risk in diabetic retinopathy is also expected to shift the focus toward surgical alternatives. This provides long-term benefits, thereby, fueling the market growth potential. Non-compliance with the diabetes vision care guidelines by the patients has been recognized as a complex and persistent health issue. According to research published in NCBI, in the US, one-third of the diabetic patients were found to be unsuccessful in following vision care guidelines diligently. The scenario in developing countries such as India & China, non-adherence has reached a proportion exceeding 60%.

An upsurge in the geriatric population base, possessing greater susceptible to developing retinal eye diseases, is further expected to broaden the base for the growth of the retinal surgery devices market. The aforementioned benefits are likely to increase the adoption of these devices over the coming years.

Consistent efforts by healthcare organizations to improve vision care are also one of the key growth contributing factors responsible to bolster growth and improve the penetration rate of retinal surgery devices during the forecast period. For instance, in 2012, the UK National Screening Committee formulated a catalog of key performance indicators for diabetic retinopathy eye screening programs in England, as an initiative to stimulate screening and better disease management.

In 2016, vitrectomy packs accounted for the largest share in the product segment. The dominant share registered by this segment is presumed to be a result of high adoption in a wide array of applications such as in posterior vitreous detachment, vitreous removal in mobile retina, epiretinal membrane removal, and combined retinal surgical procedures. The aforementioned factors are expected to be some of the key factors accentuating demand over the years.

Associated benefits with vitrectomy packs such as high portability, sensitivity, and optical magnification are responsible for the emergence of vitrectomy packs as the dominant segment. Furthermore, these products are relatively less harmful to the areas surrounding the intended surgical part. They are also used to gain greater clarity, save operating room start-up time, and achieve high-cost efficiency by a significant decrease in expenses and waste per surgery.

In addition, vitrectomy packs are considered an essential part of vision care instrumentarium and have a wide range & easy availability which drives the inclination of ophthalmologists to increasingly adopt this product. In the present scenario, there are certain manufacturers that are consistently striving to develop all-in-one vitrectomy packs which will be able to replace other essential tools.

The technological improvements in vitrectomy packs are anticipated to widen an array of alternatives for vitreoretinal surgeons. The technical improvements will result in greater incision speed & smaller incisions to yield positive patient outcomes such as decreased postoperative inflammation and conjunctival scarring, thereby, obviating the need for suturing. These factors are presumed to be responsible for the emergence of vitrectomy packs as the largest product segment in 2016.

Diabetic retinopathy held a substantial share in 2016, as a consequence of the increasing prevalence of diabetes, which is predicted to bolster the demand for the market. High demand for illumination equipment & laser projection devices in the treatment, to curb the high incidence levels, has widened the scope for growth over the previous years.

The rising number of ophthalmology conferences and exhibitions to promote awareness amongst physicians, pertaining to the availability of a wide range of alternatives for the treatment of this condition and efficient training with respect to usage of retinal surgery devices in disease management is also a key contributing factor to the segment growth.

The presence of government organizations involved in formulating guidelines and recommendations and tracking its proper implementation for efficient screening & management serves as a key factor fueling the adoption of retinal surgery devices. For instance, diabetic retinopathy guidelines issued by the Royal College of Ophthalmologists that focuses on screening, retinal lasers application, and its aspects in diabetic retinopathy.

Hospitals accounted for the largest share in the end-use segment in 2016, which can be attributed to the high patient turnaround volume and frequent readmissions. Supportive infrastructure facilitates successful surgical procedures, which mandates the adoption of retinal surgery devices, thus, resulting in a higher share of hospitals. 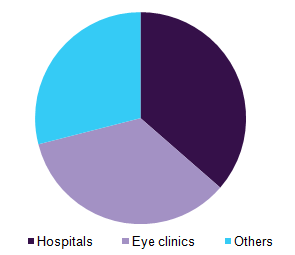 The increasing inclination of public & private healthcare organizations to promote advanced retinal surgery devices to yield better patient outcomes serves as one of the key factors responsible for the substantial share of the segment. Furthermore, hospitals are increasingly using fully automated systems that possess the ability to detect disease conditions at early stages.

Eye clinics are presumed to witness constant growth throughout the forecast period. This can be attributed to the rising importance of emergency medicine and specialty care. In the present scenario, emerging eye clinics are known to be equipped with highly advanced surgery tools thereby facilitating early detection as well as treatment.

North America accounted for the major share in the retinal surgery devices market in 2016. A consistent number of strategic collaborations aimed at the development of a new generation of products is responsible for the substantial share. Enforcement of stringent regulatory and reimbursement framework striving to ensure patient safety & high medical device standards are anticipated to propel the demand in this region.

The substantial share registered by North America is due to the growing base of the obese populations that are highly susceptible to diabetes and consequentially diabetic retinopathy. The growing number of minimally invasive surgeries resulted in garnering a significant share of this market. The region has witnessed greater adoption of these devices over the past years, is an efficient aid that provides enhanced guidance in minimally invasive surgeries.

Asia Pacific is anticipated to grow at a lucrative rate during the forecast period. Emerging economies in the region, such as India and China, are witnessing strong economic growth. Growing prevalence of disease and enhancing infrastructural standards have spurred the demand for advanced & minimally invasive treatment across this region.

The global market is highly competitive in nature. This can be marked by the implementation of competition sustainability strategies by the key players such as Bausch & Lomb Incorporated, IRIDEX Corporation, Synergetics, Inc., which accounts for the dominant market share. These companies focus on various strategies such as new product development initiatives, geographical expansion, and mergers & acquisitions.

For instance, in August 2016, Bausch & Lomb announced the availability of their product, Illuminated Directional Laser Probe in the U.S. This product launch was carried out to capture greater market share. Similarly, in November 2014, IRIDEX Corporation received a competitive tender of 350,000 USD by the government of Zambia for ophthalmology laser equipment enabling IRIDEX Corporation to tap emerging regional markets.

This report forecasts revenue growth at global, regional & country levels and provides an analysis of the industry trends in each of the sub-segments from 2014 to 2025. For the purpose of this study, Grand View Research has segmented the global retinal surgery devices market on the basis of product, application, end-use, and region:

The number of ophthalmic surgeries is declining due to the outbreak of Covid-19. It has been observed that conjunctivitis develops in around 1% to 3% of people with coronavirus. Hence, in order to maintain safety and health, ophthalmologists are being urged to not conduct ophthalmic surgeries during the pandemic except for emergency care. Various end-users in different regions are experiencing a decrease in ophthalmic surgeries such as retinal surgery which in turn is impacting the revenue of retinal surgery device providers. We are considering this pandemic impact on our estimates. The updated report will include Covid-19 as a key market contributor.