The global rhinoplasty market size was valued at USD 5.1 billion in 2021 and is projected to grow at a compound annual growth rate (CAGR) of 8.9% during the forecast period. It is a surgical procedure being performed to alter the structure of the nose. It is done to overcome breathing issues raised from injury or birth structural defects. However, nowadays it is highly performed for cosmetic reasons to alter the structure of the nose to enhance facial features or physical appeal. 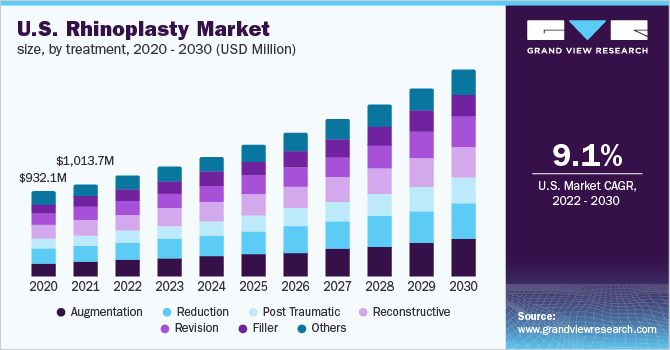 Growing awareness of aesthetics and physical appearance is projected to drive the market growth of the market. The launch of technologically advanced treatment techniques such as 3D computer-assisted technologies has led to increased demand for rhinoplasty surgery. Furthermore, in 2018, according to the Plastic Surgery Statistics Report, rhinoplasty or nose reshaping was among the top five cosmetic surgical procedures at a global level. As per the American Society of Plastic Surgeons (ASPS), the rhinoplasty procedure is the most complex facial surgery that has a revision rate of as high as 15.0%.

The outbreak of coronavirus has impacted the market negatively as there was a decline in the number of procedures in 2020 due to global restrictions. The COVID-19 pandemic has significantly affected the rhinoplasty market. Initially, there were increased concerns, especially for rhinoplasty surgeons, as the virus can transmit from the nose, and the chances of transmission were high. Cosmetic surgeons are virtually communicating with their patients using telemedicine. Only the emergency procedures were performed too with strict protocols to be followed.

However, on the other side, aesthetic surgery clinics in countries such as Japan, the U.S., South Korea, and Australia witnessed a rise in the number of people opting for plastic and cosmetic surgeries such as rhinoplasty as they had enough recovery time at home and have the option of wearing a mask while going outside.

The launch of any product for rhinoplasty procedures is strictly governed by specific regulations, whose approval is necessary for the launch of new products in the market. The rising adoption of cosmetic surgeries among celebrities and increasing awareness regarding cosmetic surgeries are expected to propel the growth of the market. However, complications associated with the surgeries, like bleeding after rhinoplasty procedures and chances of success rate could hamper the growth of the rhinoplasty market.

According to the American Society of Plastic Surgeons (ASPS) statistics, nose surgeries or rhinoplasty is gaining huge popularity and have become the third most popular aesthetic procedure in the United States. The recently released report from the American Society of Plastic Surgeons on annual trends showed just how significantly the coronavirus pandemic rocked the aesthetics world. However, it is also one of the most complex surgeries to perform. The American Journal of Cosmetic Surgery stated that revision rhinoplasty surgeries in the region are steadily rising.

Furthermore, rhinoplasty is the most prevalent type of cosmetic procedure when it comes to males in the United States. From the improvement of functionality to the correction of flaws, there are many factors for rhinoplastic surgery in males. Even though women account for nearly 90% of all plastic surgeries in the U.S., male rhinoplasty is becoming more prevalent. This is likely to drive the market of rhinoplasty further in the region.

Based on treatment type, augmentation rhinoplasty dominated the market in 2021 with a share of 17.5%. The market has been segmented into seven categories namely, augmentation, post-traumatic, reduction, reconstructive, revision, filler, and others. This is attributed to its use in both, the improvement structure and function of the nose. Augmentation nose surgery is one of the most common cosmetic procedures in regions such as Asia, with silicone implants being the most widely adopted material for augmentation nose reshaping surgery. It has many benefits and is a very useful procedure option in patients who have an aversion to the use of artificial implants.

Due to the rising cases of failures in rhinoplasty surgery, patients are undergoing secondary nose reshaping surgery to correct the deformations caused in primary rhinoplasty. Due to this, the number of revision rhinoplasty is increasing across the world. In 2018, according to the American Academy of Facial Plastic and Reconstructive Surgery, about 94.0% of the surgeons performed a revision rhinoplasty.

North America dominated the overall market and accounted market revenue share of 23.79% in 2021. Well-developed healthcare infrastructure and the presence of board-certified and skilled cosmetic surgeons in North America have fueled the market growth of rhinoplasty in the region. According to the International Society of Aesthetic Plastic Surgery (ISAPS), the U.S. is reported to top the list of countries having the maximum number of cosmetic surgeons in the world with over 7,000 surgeons present in 2018. 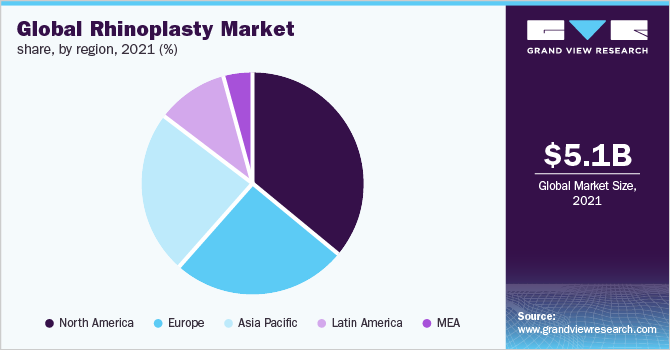 Asia Pacific region is projected to witness the highest growth at a 9.5 % compound annual growth rate (CAGR) during the forecast period. This growth is attributed to rising income levels, growing interest in physical appearance, and medical tourism which is highly adopted due to the low cost of procedures, and rising improvements in healthcare infrastructure in this region. According to the International Society of Aesthetic Plastic Surgery, China is among the top three countries to have the maximum number of cosmetic surgeons which is about 6.5% of the total number of cosmetic surgeons in the world.

MEA is anticipated to witness lucrative growth during the forecast period. This can be attributed to increasing medical tourism in this region due to affordability. According to a research paper published in Plastic and Reconstructive Surgery in 2018, one of the most commonly performed surgeries among all aesthetic surgeries is rhinoplasty in the Middle Eastern region.

Based on technique type, the open nose reshaping segment dominated the market in 2021 with a share of 51.2% and is also projected to remain dominant and grow at the fastest CAGR during the forecast years. The market has been segmented into open and closed rhinoplasty., owing to its ability to undertake complex and extensive nose surgery. Closed nasal surgery is mostly preferred by the patients in case of minor modifications required in the nose.

Some of the players operating in the market include companies that manufacture surgical equipment to perform rhinoplasty and clinics that are well known due to their cosmetic surgeon’s skills and capabilities.

Technological advancements in the market can boost the market growth. For instance, in April 2019, researchers at the Occidental College developed a non-surgical nose job that uses tiny needles, an electric current, and 3D-printed molds to reshape living tissue. In this, small needles are inserted into the cartilage, an electrical current is passed through, and the cartilage is reformed to the desired shape. The innovative technology could take just 5 minutes and revolutionize cosmetic surgery in near future. Some prominent key players in the global rhinoplasty market are:

This report forecasts revenue growth at the global, regional, and country-level and provides an analysis of the latest trends and opportunities in each of the sub-segments from 2018 to 2030. For this study, Grand View Research has segmented the global rhinoplasty market based on treatment type, technique, and region:

How big is the rhinoplasty market?

What is the rhinoplasty market growth?

Which segment accounted for the largest rhinoplasty market share?

b. The augmentation rhinoplasty segment dominated the rhinoplasty market with a share of 17.4% in 2021. This is attributable to its necessity for both functional and aesthetic indications.

Who are the key players in the rhinoplasty market?

What are the factors driving the rhinoplasty market?

b. Key factors that are driving the rhinoplasty market growth include rising awareness among people about physical appearance, rapid technological advancements in the dermatology industry, and rising disposable income.

With COVID-19 infections rising globally, the apprehension regarding a shortage of essential life-saving devices and other essential medical supplies in order to prevent the spread of this pandemic and provide optimum care to the infected also widens. In addition, till a pharmacological treatment is developed, ventilators act as a vital treatment preference for the COVID-19 patients, who may require critical care. Moreover, there is an urgent need for a rapid acceleration in the manufacturing process for a wide range of test-kits (antibody tests, self-administered, and others). The report will account for COVID-9 as a key market contributor.